In today's tutorials, we are going to have a look at escape sequence in C++. In our previous tutorial, Introduction to C++ we have designed a small Hello World program and if you haven't studied it yet then you should first check that one out as I am gonna take it further from there.

These are different escape sequence uses in C++ and I hope you have got it now that How to use Escape sequence in c++. In the coming tutorial, I will explain How and why to use comments in C++. That's all for today, take care and have fun !!! :) 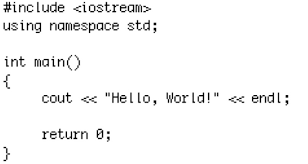 Previous
How to use Comments in C++