Hey Fellas! Hope you are doing great. I am here to give you the daily dose of information relating to engineering and technology. Today, I am going to give you the details on the Introduction to 2sc4617. It is an NPN (negative-positive-negative) transistor which is used for general purpose amplification. This component comes in SC-75/SOT-416 sealed package which is mostly used for low power applications. I am going to explain the brief overview of 2sc4617. Let’s get started.

Pinout of 2sc4617 silicon transistor is shown in the figure below. 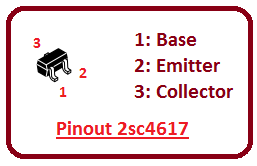 This transistor consists of three terminals.

Circuit symbol of 2sc4617 is shown in the figure given below. 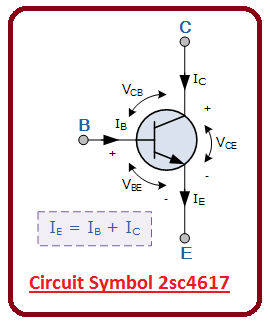 Maximum current and voltage rating of 2sc4617 is given in the figure below.

Thermal features of this bipolar transistor is given below.

Electrical characteristics are of great value. They are shown in the figure below.

That’s all for today. I have tried my best to explain each and everything regarding this 2sc4617 transistor. However, if you still find any difficulty in understanding the concept of this transistor, you can ask me in the comment section below. I’ll be happy to help you in this regard. Thanks for reading the article. Stay tuned for next article. Good Bye!