Hi Guys! Hope you are doing well. I am back to keep you updated with valuable information related to engineering and technology. Today, I’ll discuss the detailed Introduction to JK Flip Flop. It is a flip-flop, also known as a latch circuit, that can be either active-high or active-low based on the signal applied. It is an improved version of the SR Flip Flop and prevents the circuit from going in an invalid state. As the name suggests, it helps the circuit toggle between two states.

There is a slight difference between Flip-flop and latch. Don’t you worry, we will figure it out later in this post. Rest assured, both are nothing but a data storage element mainly used in communications, decoders, multiplexers, and registers.

In this post, I’ll cover each and everything related to JK Flip Flop, so you don’t have to wrestle your mind surfing the whole internet and find all the information in one place. Let’s jump right in.

JK Flip Flop is a universal flip-flop that makes the circuit toggle between two states and is widely used in shift registers, counters, PWM and computer applications.

Before we nail down the details of JK Flip Flop, we must know what is Flip Flop.

In engineering circuits, most of the devices need to store information using Set or Reset, HIGH or LOW which ultimately written in the form of zeros and ones.

The circuits that come with a toggling nature whose outputs depend on the present input and the sequence of past input values are known as Sequential Logic Circuits. 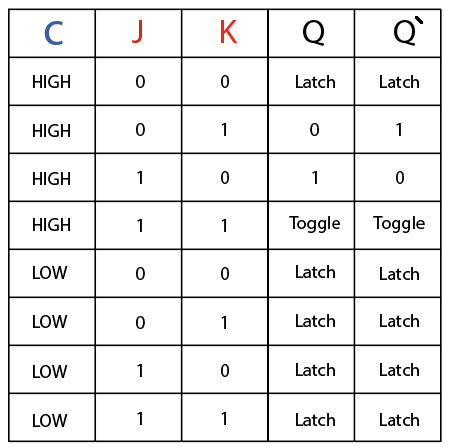 When both inputs are active HIGH, the output starts toggling between the two states. This is the reason JK Flip Flop is widely considered as an astable device. 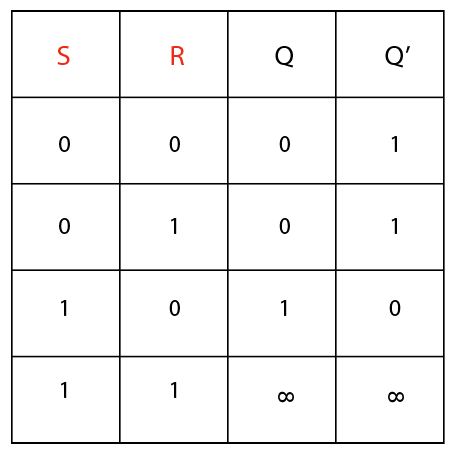 You can see, when both inputs are 1, the circuit goes to the invalid state.

Note: The SR flip-flop is also known as a 1-bit memory, as it comes with an ability to store the input pulse even after it has been passed.

Difference between Flip Flop and Latch

The basic difference between a latch and a flip-flop is a clocking process. The latch is asynchronous where outputs are drastically influenced by the slight change in inputs.

In SR Flip Flop, the output Q would be high as you set S active HIGH and eventually Q’ will be low, producing the asynchronous result. On the other hand, SR latch is synchronous where output changes as you give an active clock signal.

The Latch is mainly divided into two types

And in an Active-low latch, the inputs are kept HIGH, activating the latch by applying the LOW signal on either input. When the SET input turns LOW, the output will go HIGH. The output remains in HIGH condition until the RESET pin goes LOW.

JK Flip Flops is widely used in electronic circuits with the main aim to store the state information of the device. Following are the major applications it can be used for.

That’s all for now. I’ll be writing more articles related to some basic circuits used in engineering. If you have any question, you can ask me in the comment section below. I’d really appreciate if you have something to add in this post that has been left unsaid. Based on your feedback and suggestions, we shape our content strategy, so keep them coming. Thanks for reading the article.