Hello friends, I hope you all are doing great. In today’s tutorial, I am going to give you 8 Live Streaming Alternatives to Sky News. In today’s world, remaining informed is very important, which means that choosing our news sources matters more than you think. The political landscape is so volatile and the world moves so quickly, it’s necessary to keep track of the things that matter most. But it’s also necessary to be careful with the quality of the content we allow into our brains. You should also have a look at 7 Reasons to Choose Satellite Streams for Live Streaming TV, that will much better idea about its importance in digital world.

That’s why it’s essential to choose news outlets and networks that we can trust to deliver high-quality, objective content, but that can also challenge our point of view and offer fresh, in-depth insight that we can use to shape our beliefs and opinions.

One of the best ways to keep track of what’s going on is Sky News. As you may already know, Sky News is a British news outlet and it’s one of the most popular in the world. However, watching Sky News live is not the only option you have to keep yourself informed and up to date with everything that’s going on in the world on a daily basis.

That’s why today I bring you 8 live streaming alternatives to Sky News that are just as popular and just as dedicated to information. This way, you’ll have several options to keep yourself on the loop and you’ll be able to access information from different perspectives. 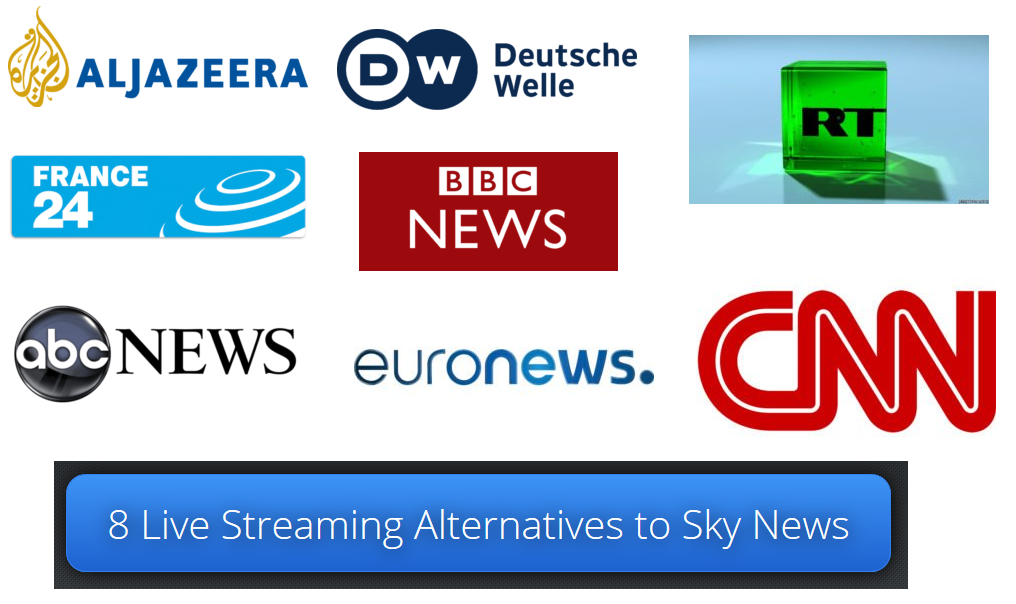 Al Jazeera English has been broadcasting since 2006 and it’s part of a large, but ever-growing network that consists of more than 10 different channels. Al Jazeera Arabic was launched in 1996, and it was the first news channel in the Arab world to dedicate their content to the news and the sharing of opinions. They were also the first to challenge the narrative and to provide a different perspective. As a result, it quickly became one of the most influential news networks in the world.

Al Jazeera English is a good alternative to Sky News because it provides the news while following their own principles and values, such as honesty, independence, diversity, and fairness, among others. Their mission is to be the voice of the people and they understand people’s need for quality information and in-depth analysis, which means they provide high-quality content you can trust.

Another great alternative for Sky News is France 24, an international news channel that’s available 24 hours a day, all year round. It reaches over 355 million homes in many different languages, including English, Spanish, French, and Arabic. France 24 is available to all via cable, satellite, ADSL, DTT, and, of course, via the Internet so you can enjoy it on all your devices via live stream whenever you need.

France 24 is based in Paris and it’s completely owned by the French government. They were founded in 2006 and, since then, it has become one of the leading international news networks in the world. The content diversity will keep you informed on a number of different issues and you’ll be able to learn about all the major news and events all over the world.

Deutsche Welle, better known as DW or the Voice of Germany, is a popular German public international broadcaster. It’s available in 30 languages, which is one of the reasons why it’s such a great alternative to Sky News. Even though Deutsche Welle was funded and is owned by the German government, the content is completely independent of the government’s influence. This means that they strive to provide objective and educational content to people around the world, free of any kind of outside influence and bias so you can draw your own conclusions and think for yourself.

They offer channels in German, English, Spanish, and Arabic as well. Their mission is to provide news coverage you can trust, promote understanding between all different cultures and peoples around the world, and provide a comprehensive image of Germany. They’re available on TV, the radio, and also online. Their flagship program is the 24-hour news broadcast and you can check it out whenever you want!

The American Broadcasting Company, better known as ABC, is one of the biggest news broadcasts in the United States, and the world, and it’s owned by the Disney Media Networks division.

Their flagship program is ABC World News Tonight with David Muir, but they also offer high-quality content across the board, with shows such as Good Morning America, The View, Nightline, 20/20, This Week with George Stephanopoulos, and Primetime, among others. These shows have become staples for the American people and they offer a great variety of content for you to enjoy.

ABC is a great alternative to Sky News and it has been on the air since 1943. ABC has proven to have a true commitment to delivering high-quality content and, for this reason, it has become one of the most reliable news sources in the US and the world. They broadcast the news 24/7 and you can watch their live stream online any time you wish!

The British Broadcasting Corporation, better known as BBC, is another alternative to Sky News that will deliver all the information you need on the news and current affairs around the world. BBC is the world’s largest news organization and it’s responsible for around 120 hours of radio and TV content every single day, not to mention their online news coverage efforts.

BBC news has 50 foreign news bureaus around the world and it operates independently. Their live stream is available online 24/7 and you can catch the news, as brought to you from BBC, on all your devices at any time of the day. If you’re looking for a reliable news outlet, BBC News is available for you at all times and you will have access to objective, reliable information.

Yet another great alternative to Sky News is Euronews, a European TV news network that has been broadcasting since 1993. It’s located in Lyon, France, and their mission is to provide coverage of news around the world from a pan-European point of view. This means that they offer a unique perspective and they also aim to encourage critical thinking by delivering factual analysis of world events and a diversity of opinions and perspectives to encourage discussion.

Euronews has become a trustworthy and reliable source of information to audiences all over the world. They offer 24/7 news coverage in several different languages, including English, French, Spanish, Arabic, German, Greek, Russian, Persian, Turkish, Italian, Hungarian, and Portuguese. Euronews is available on TV and on the Internet, which means it’s available on all digital platforms around the world. You can catch their 24/7 news live stream online from all your devices whenever you need!

RT, formerly known as Russia Today, is an international TV network located in Moscow, Russia, and that was founded by the Russian government. It broadcasts in Russia and it’s available online in many different languages, including Russian, English, French, Spanish, German, and Arabic. RT was actually the first Russian news channel to broadcast 24/7 and in English to spread the Russian point of view around the world.

Besides broadcasting the news, RT also broadcasts other content, including documentaries, debates, talk shows, sports news, and even cultural programming that’s meant to provide a Russian perspective on major global events and news. You can enjoy RT’s live stream online from all your devices at any time of the day and see how the Russian point of view is expressed. This will help you compare information and exercise your critical thinking capacities in a whole new way.

Cable News Network, better known as CNN, is the last Sky news alternative on this list and it’s a well-known American news outlet that has been with us since 1980. This 24-hour cable news channel was the first of its kind and it was also the first channel in the United States to be dedicated entirely to news coverage.

This historic news network broadcasts from the Time Warner Center located in New York City, and it’s available to over 100 million American homes. It’s also available online for the rest of the world and you can enjoy their programming any time you want.

What all these news outlets and networks have in common is a commitment to education and information. Some of them offer objective news coverage while others want to give it a unique perspective. Either way, every single one of these options will encourage you to exercise your critical thinking and to stay on top of all the important news and world events.

After all, we live in a world where information is truly a commodity and we’re lucky enough to have access to it for free via the Internet. What’s more, we’re lucky to have access to different perspectives, analysis, and opinions from experts all around the world who care about educating the people and bringing cultures together through the power of information and education.

Check out any of these live stream news channels and you will have access to limitless information!