Hello everyone! I hope this article will find you in great health. Today, in this article, we will discuss in detail: What is velocity? We will take a look at what exactly velocity is, how it can be measured, what scale has System International (SI) defined to measure the velocity, how many forms of velocity do exist in our surroundings, and what are the real-life applications of this physical quantity?

I will let you guys know about how velocity is a regular part of our daily lives and how it behaves in the environment we are living in. To understand the basic concept we need to have a deeper look at its real-life examples. A detailed discussion on velocity to have a better understanding is provided in the next section. Let’s get started.

An earthly object can possibly have two states i.e. rest or motion. If an object is in motion, a numerical value called Speed is used to measure how fast or slow the object is moving? Speed is defined as the distance covered per unit of time. So, if an object covers a distance of 1 meter in 1 second, its speed will be 1m/s. As speed is a scalar quantity so it just gives the scalar information(about motion) and doesn’t tell us anything about the direction of the movement i.e. object is moving towards north, south or may have a circular motion.

So, in order to completely define the motion of an object, an equivalent vector quantity of speed was introduced and named Velocity. Velocity, not only gives the numerical value(speed) but also tells the direction of the moving object. In simple words, speed plus direction is equal to velocity and as speed is distance per unit time, similarly velocity is displacement per unit time. 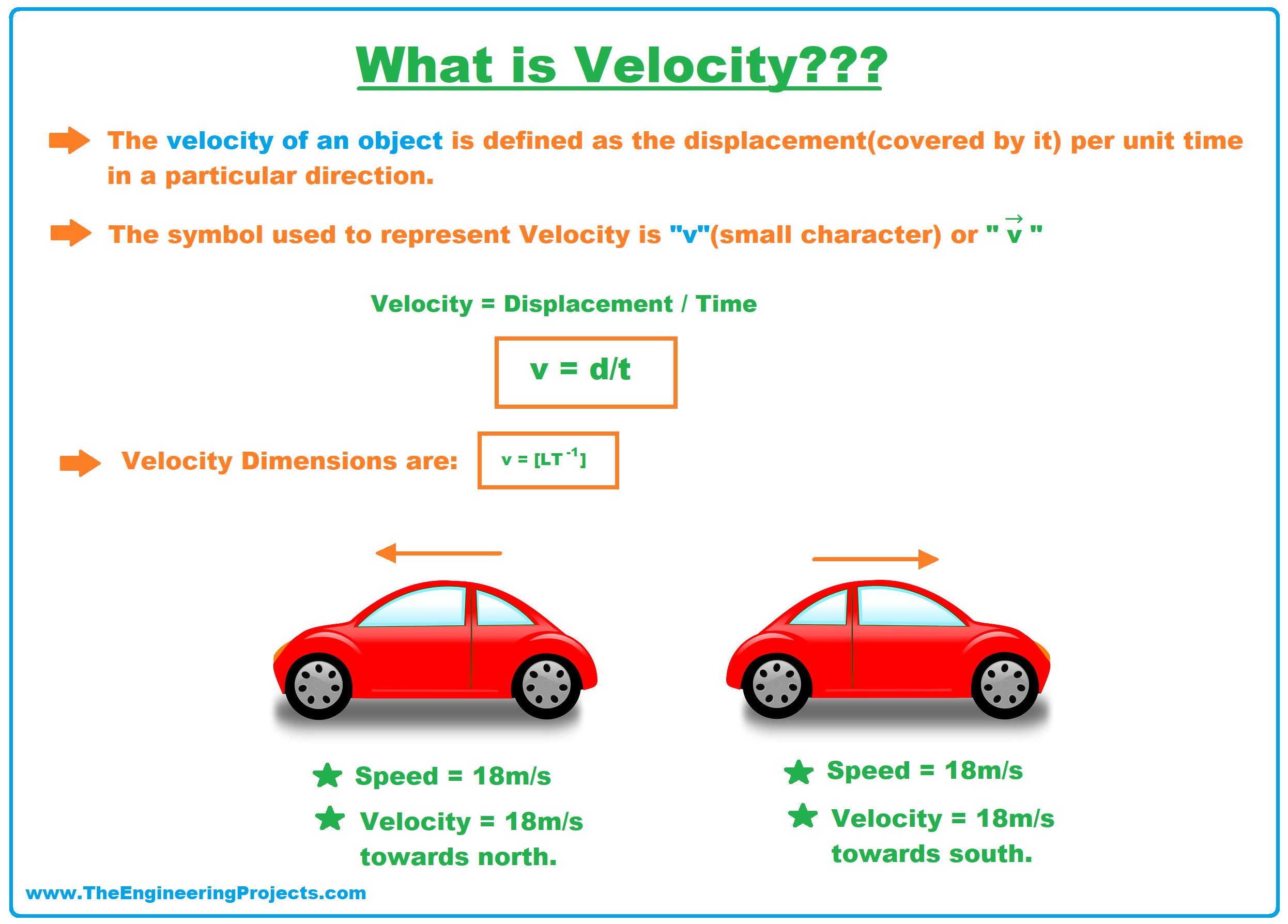 Now let’s have a look at a proper definition of Velocity:

Let’s have a look at the symbol of velocity:

Now let’s have a look at the mathematical formula for calculating the velocity of an object:

As v & d are both vector quantities, so written in bold while t is a scalar quantity.

Now, let’s drive the velocity unit from its formula:

where SI unit of displacement is the meter and that of time in seconds.

In the game of cricket, the velocity of the ball is usually not measured in SI units rather they measure it in either kilometer per hour or miles per hour.

Depending upon various factors, velocity has been divided into multiple types as discussed below. Let’s read through them all.

Let’s understand it with an example of a ball thrown upwards:

As we know, Earth’s gravitational force pulls everything towards it. So, considering the earth as a reference point, when you throw a ball in the upward direction, it’s moving away from its reference point(Earth’s center). So, during its upward flight, the ball will have a negative velocity and thus is written with a negative sign.

Let’s continue that example of the ball moving upward:

As we have seen in the previous section, the ball will have a negative velocity while moving upward. But when it will reach the maximum height and rite before moving back in the downward direction, for an instance it will have a zero velocity, as it won’t be moving either upward or downward.

Let’s add some more in that ball example:

Once the ball reaches the maximum height, it will start moving back in the downward direction. Now, the ball is moving towards its reference point(Earth’s Core) so it will be said to have positive velocity now. 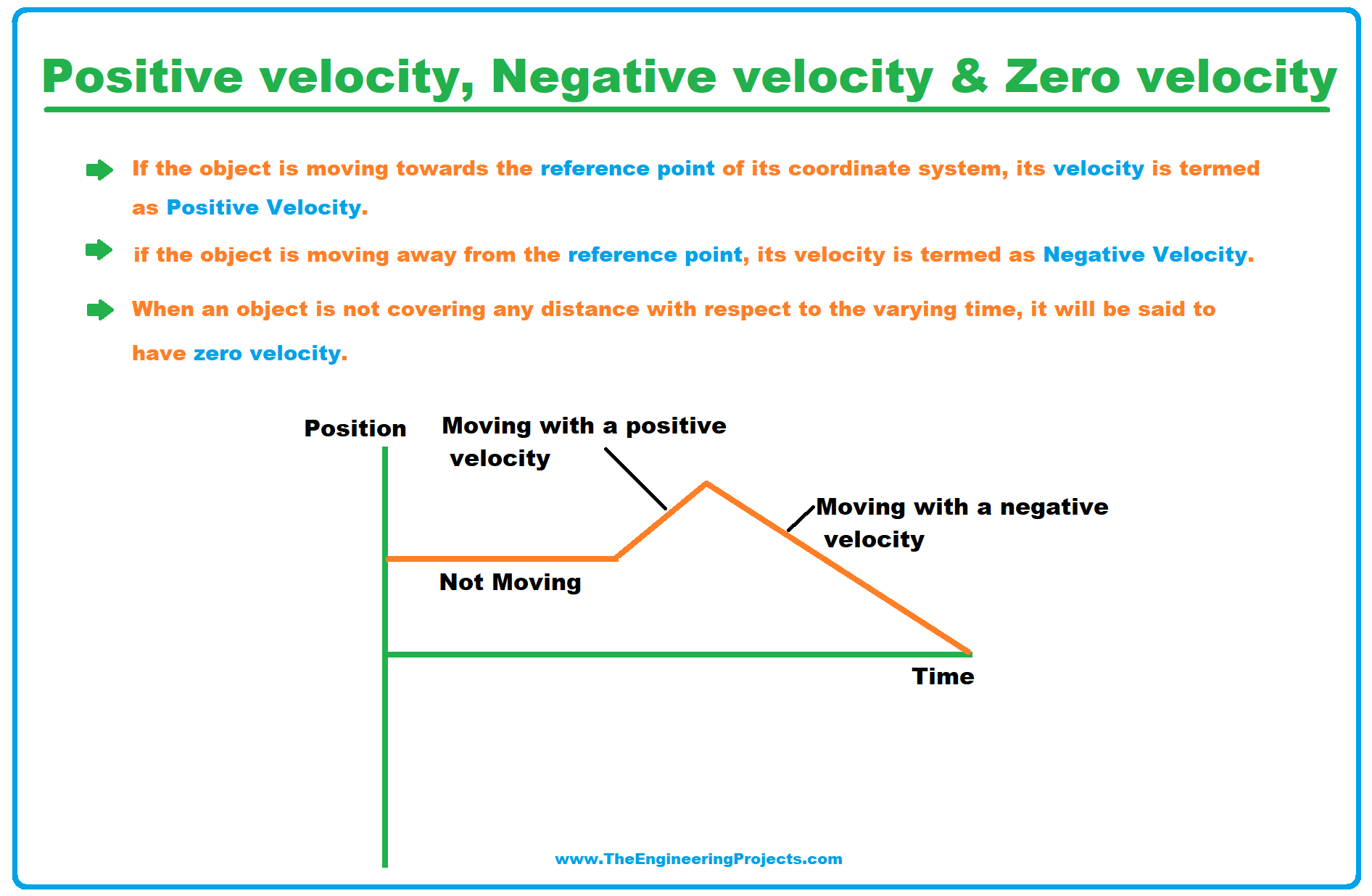 Let’s understand it with the same example:

We have seen the ball example thrown upward. If we consider both of its loops(moving upward and then downward), its initial velocity will be right where it left the hand of the thrower. It will have a maximum initial velocity as during the upward direction it will slow down and during the downward direction, it will lose some to friction. But if we only consider the second loop i.e. the ball has reached its maximum position and now it’s moving downwards. So, in this scenario, the initial velocity of the ball will be 0. I hope it got cleared. 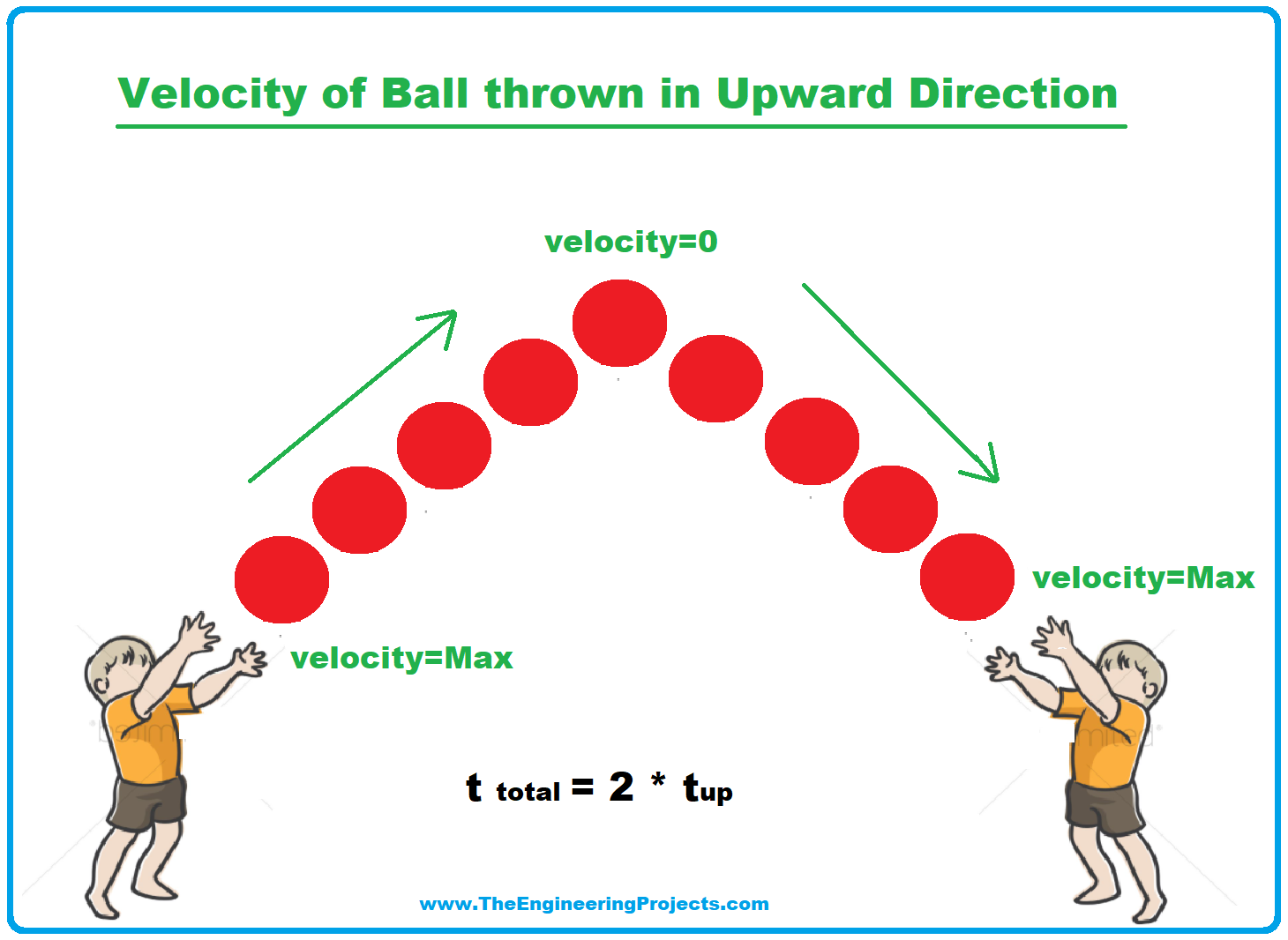 The above expression shows when we multiply acceleration with the given time and subtract this product from the final velocity, it gives us the initial velocity.

Let’s understand the concept associated with the final velocity through a visual example.

A projectile motion of the ball thrown from one end is shown in the figure below. At time zero (t = 0), when a guy in a purple shirt throws a ball, the velocity of that ball at this time is considered initial velocity. After reaching a particular height, when the ball starts moving downwards and reaches at t = 8 seconds in the hands of a guy wearing a green shirt. At t = 8 seconds, the velocity of the ball is the final velocity. After this velocity, an object comes again into the stationary position.

Similarly, if you drop a ball from a specific height and allow it to move towards the ground as shown in the figure below. The moment you drop the ball, the velocity is called initial velocity. Whereas, the moment when the ball touches the ground, the velocity will be known as the final velocity.

Now let’s have a look at different types of velocity in detail:

Depending on the type of object and its motion, we have numerous types of velocities, a few of them as discussed as follows:

Average velocity cannot tell us how fast or slow an object is moving in a specific interval of time and for that, we have another type of velocity called Instantaneous velocity.

By applying a limit “t” approaches zero on the average velocity provides us with the instantaneous velocity as shown in the formula given below.

Take a look at the figure below, the velocity at point “p” depicts the instantaneous velocity of a moving body.

The figure below shows the relation between average and instantaneous velocity. The velocity is represented by the red line and has been divided into several segments. The position is displayed on the y-axis whereas the x-axis shows the time consumed. In the first interval, Jack has covered 3 miles in the first 6 minutes. In the second interval, Jack stopped for 9 minutes. Whereas, in the third interval, Jack covered another 5 miles in 15 minutes. If we divide the total displacement covered by Jack by the total time consumed during the whole travel, it will give us an average velocity.

xo=position of the body at t=0

This scenario can be visualized through a velocity-time graph as shown in the figure below. You can see a straight line for each time interval depicting the velocity is constant throughout with “0” acceleration.

Let’s understand this from a real-life example.

For instance, if a fan installed in your room is rotating at a continuous speed, its velocity will be variable because its direction gets changed every time.

Let’s have a look at how to find the angular velocity of a moving object?

To calculate this quantity, a formula is given below.

The direction of motion of an object moving with angular velocity is always perpendicular to a plane of rotation. It can be measured using the right-hand rule. The whole concept is shown in the figure below.

The above figure shows that the linear velocity is dependent on the two different parameters i.e., distance covered and the time consumed to cover that particular distance.

Let’s have a look at how to find linear velocity?

It can be calculated using the below mathematical expression.

Putting this value in the above formula we have,

The linear velocity can also be represented in terms of an angular velocity as given below. 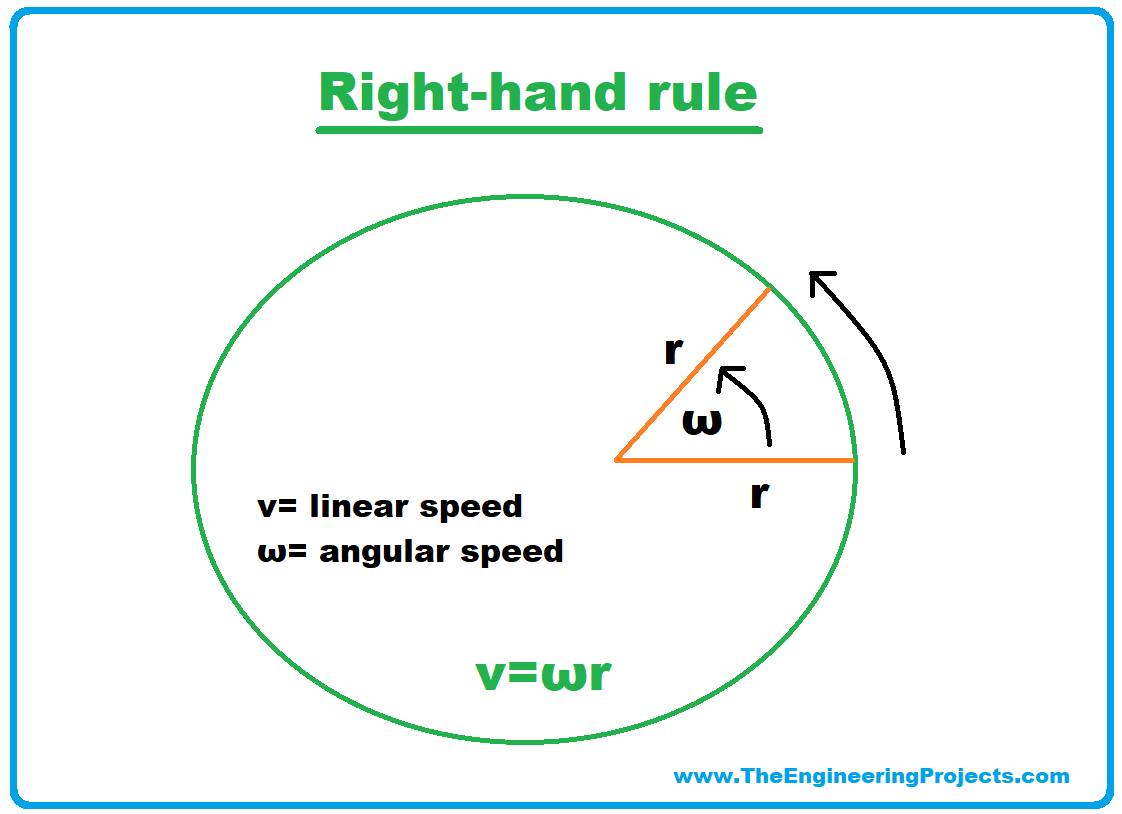 Let’s understand with an example. 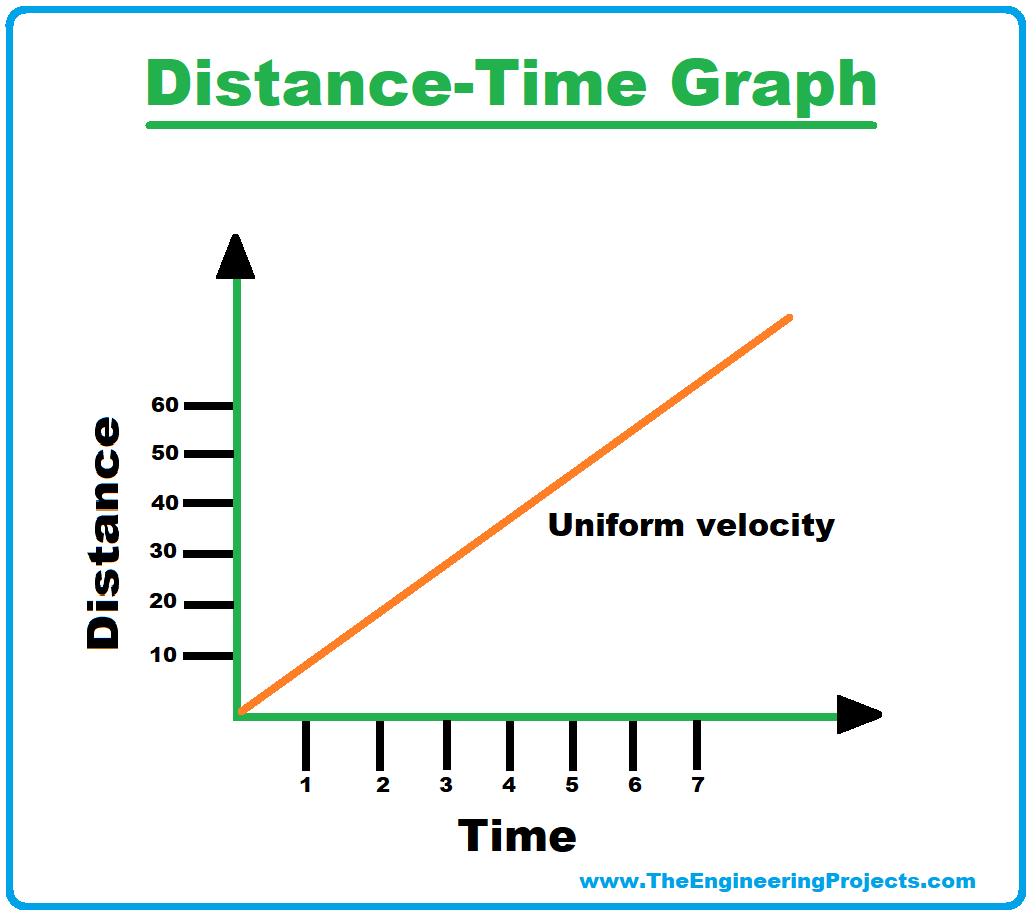 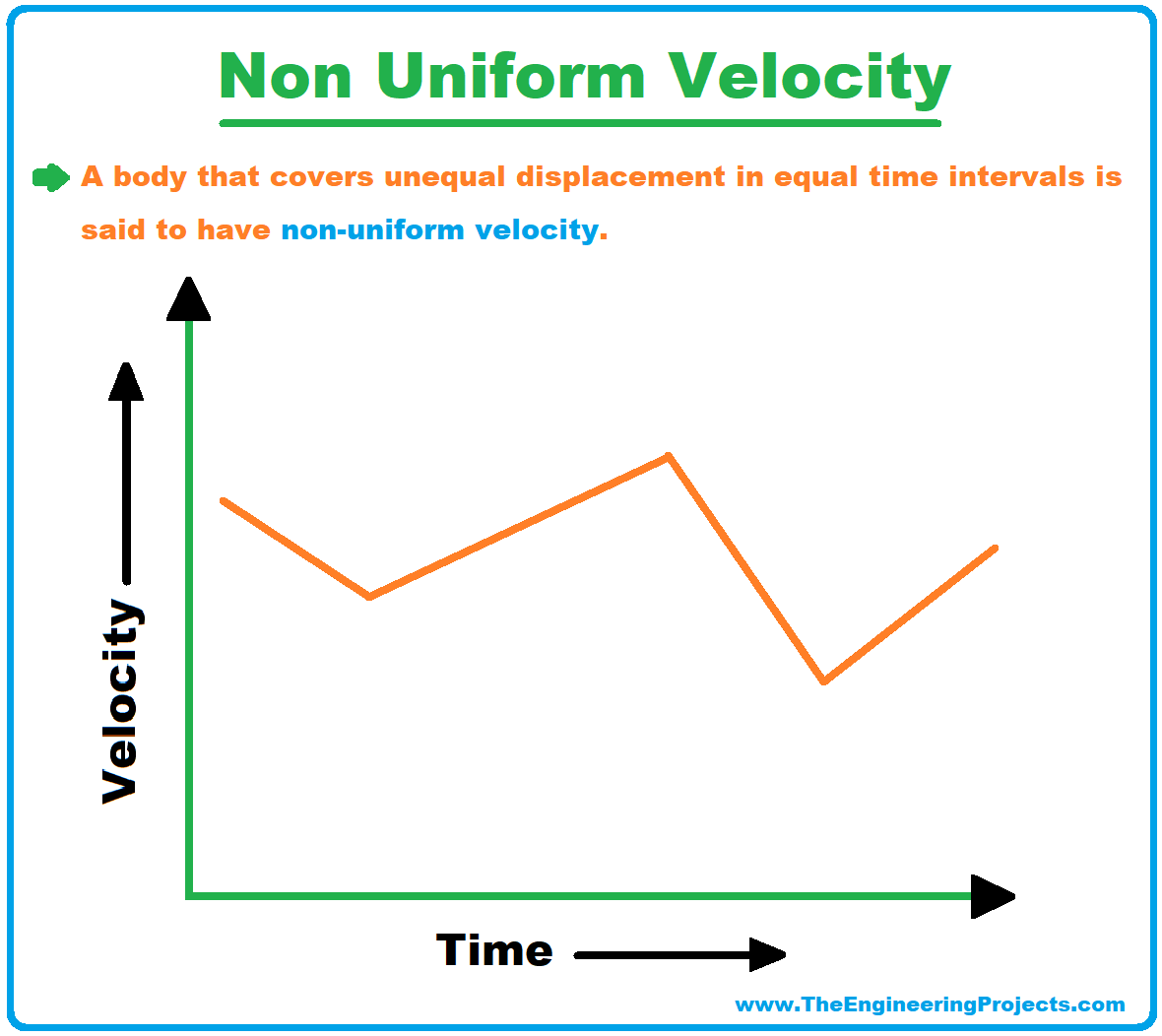 Let’s understand this with a visual example.

The track of a car moving with non-uniform velocity is shown in the below figure. Unequal displacements covered in equal intervals of time can clearly be seen from the velocity-time graph.

Let’s understand the overall scenario with an example.

For instance, the air is causing some hindrance in the airplane’s track or a boat is traveling through the river whose water is flowing at a particular rate. In such cases, to observe the complete motion of the object, we need to consider the effect of the medium affecting the motion of a moving body. By doing so, we measure the relative velocity of that moving object as well as the medium’s velocity affecting its motion

Let’s have a look at another example to have a better understanding of relative velocity.

Now, let’s have a look at what parameters creates a difference between speed and velocity.

Difference Between Velocity and Speed

It has been proved through various research studies that most of the time people get confused when it comes to speed and velocity. They mostly get confused in implementing their concepts separately in different scenarios as and when needed.

If I tell you the very basic difference between these two quantities, they are just as different as distance and displacements are.

Let’s have a look at some more points to understand the difference effectively.

Therefore, keeping in mind the above points, it can be said that a direction creates a major difference between speed and velocity.

Let’s understand through an example.

A few examples of velocity from real-life are presented to clear your concepts related to it if there still exists any confusion.

This is all from today’s article. I have tried my level best to explain to you each and everything associated with the velocity. I have focused in detail on its basic concept, various forms, unit assigned by System International, and visual examples where needed. Moreover, I have provided you with a couple of examples captured from real life so that you can have a better understanding of velocity.

I hope you have enjoyed the content and are well aware of this topic now. If you are looking for more similar information, stay tuned because I have a lot more to share with you guys in the upcoming days. In case you have any concerns, you can ask me in the comments. I will surely try to help you out as much as I can. For now, I am signing off. Take good care of yourself and stay blessed always.