Hi Fellas! Hope you are doing well. The table shown above is a Celsius to Fahrenheit Converter. As you put any Celsius value in the table, it will swiftly convert it to Fahrenheit.

Celsius and Fahrenheit are closely related to each other and need conversion while displaying temperature intervals of any experiment or the magnitude of temperature.

Following formula is used to convert relate Celsius to Fahrenheit.

Just put the values in the formula

Table for Some Basic Values

Follow table shows the conversion for some common values of Celsius. 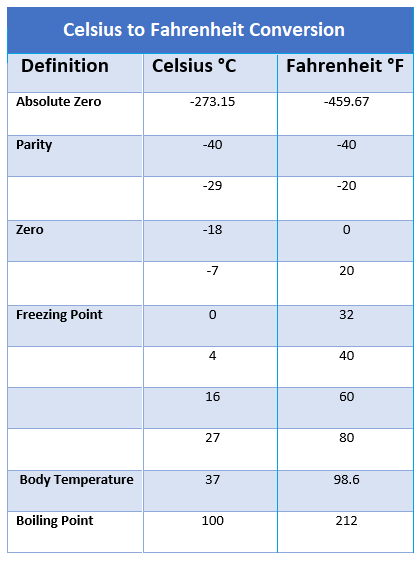 These temperature scales don’t share a common point. They require some offset to be added in the start to make them equal. Unlike Kelvin and Celsius that once are reserved for water freezing point, share a regular increment in values, Fahrenheit and Celsius don’t increment with regular intervals where Fahrenheit is distributed with 180 (32 -212) points from water freezing to boiling point while Celsius goes from 0 to 100.

The Celsius temperature can be defined in terms of Kelvin temperature where 0 Kelvin is equal to -273.15 Celsius – the point mostly known as Absolute Zero.

Uppsala University’s Olof Beckman stated “Celsius should be recognized as the first to perform and publish careful experiments aiming at the definition of an international temperature scale on scientific grounds,”

Celsius is the SI unit of temperature and is also defined as per the boiling and freezing point of water where water freezes at 0 C and boils at 100 C.

The freezing and boiling point of water are separated by 180 points in the Fahrenheit scale.

Fahrenheit is a temperature scale defined as a temperature at which water freezes at 32 F and boils at 212 F, measured at sea level with standard atmospheric pressure.

Fahrenheit is a temperature scale introduced by German physicist Daniel Gabriel Fahrenheit in 1724. He performed the experiment on ice-salt mixture and came with the conclusion that water was frozen at 30 F and normal body temperature was supposed to be 90 F.

However, the idea was turned down by him after performing a couple of experiments and proposed new values for water freezing point as 32 ºF, modifying body temperature as 96 ºF.

That’s all for today. I hope you have found this post useful and informative. In case, you are feeling skeptical or have any question, you can ask me in the comment section below. I’d love to help you according to the best of my expertise. Thanks for visiting this post.