Hey Fellas! Hope you are getting along with life pretty well. The above calculator is a representation of Fahrenheit to Rankine Converter. You can put any value in Fahrenheit temperature scale, it will convert it to Rankine scale in a single click.

You need to convert temperature from one scale to another based on the nature of the experiment you are carrying out. The given formula will help you understand the calculation behind the conversion.

Following formula is used for conversion from Fahrenheit to Rankine temperature scale.

As per the given formula

Just put the values in the formula.

Table with some common values 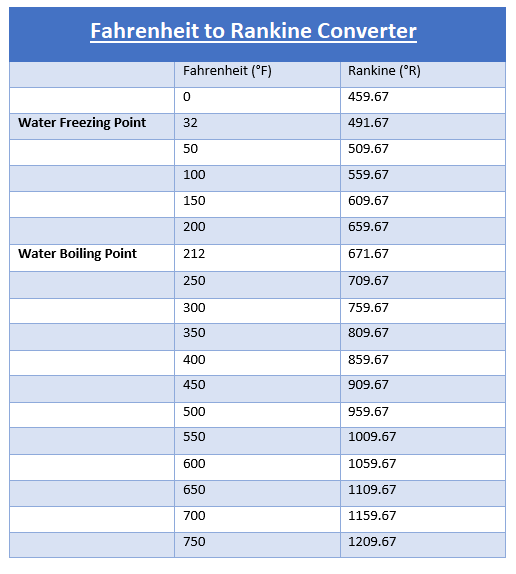 Fahrenheit can be defined in terms of water boiling and freezing point where it boils at 212 ºF and freezes at 32 ºF.

It is important to note that, all these values in Fahrenheit and Rankine scales are calculated and measured at sea level using standard atmospheric pressure.

Rankine temperature is defined as the absolute scale of thermodynamic temperature. It is denoted by ºR.

It is true Fahrenheit and Rankine scales don’t share a common point and 0 ºR is equal to -459.67 ºF, however, these values increment gradually with the same factor once they are made equal with some offset be added in the start.

Rankine is mainly used in a variety of engineering systems involving heat commutations.

That’s all for today. I hope you have found this read valuable. If you are unsure or have any question, you can drop me a comment in the section below. I’d love to help you the best way I can. Feel free to keep us updated with your feedback and suggestions, so we keep providing quality content as per your requirements and you keep coming back for what we have to offer. Thanks for reading the post.