Hello Friends! Hope you’re well today. I welcome you on board. In this post today, I’ll walk you through the Introduction to IRF730.

The IRF730 is an n-channel MOSFET where major charge carriers are electrons and conduction in the transistor is carried out due to the motion of these electrons. It comes with a TO-220 package where the drain-to-source breakdown voltage is 400V and power dissipation is 100W.

I suggest you read this post all the way through as I’ll be discussing the complete Introduction to IRF730 covering datasheet, pinout, features, power ratings, equivalent, and applications.

Before you use this component into your electrical project, scan through the datasheet of the device that details the main characteristics of the component. You can download the datasheet of IRF730 by clicking the link below. 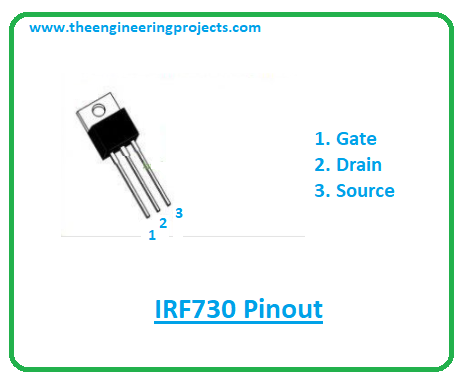 The following are the equivalent to IRF730.

That was all about the Introduction to IRF730. If you have any questions, you can ask me in the section below, I’d love to help you according to the best of my expertise. Feel free to keep us updated with your valuable feedback and suggestions and help improve the quality of our content. Thank you for reading the article.