Hi Fellas! Hope you’re well today. Happy to see you around. In this post today, I’ll walk you through the Introduction to IRF840.

The IRF840 is an n-channel power MOSFET. It is a fast switching and high voltage device that is available with low on-state resistance. As this is an n-channel MOSFET here conduction process is exercised by the movements of the electrons. In other words, though conduction is carried out by both the movement of holes and electrons, electrons are major carriers in this case.

I suggest you read this entire post till the end as I’ll discuss the complete Introduction to IRF840 covering datasheet, pinout, features, equivalent, and applications. 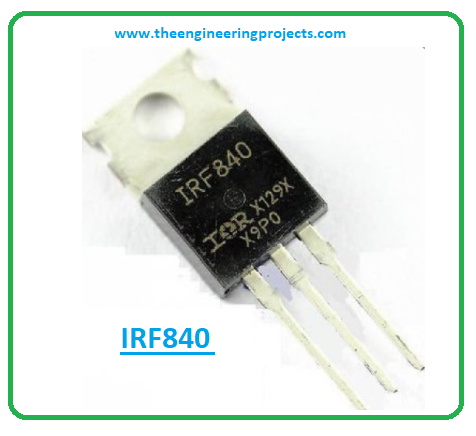 The IRF840 is an N-channel power MOSFET. It is a fast switching device that comes with three pins known as

The following figure shows the pinout diagram of IRF840 MOSFET. 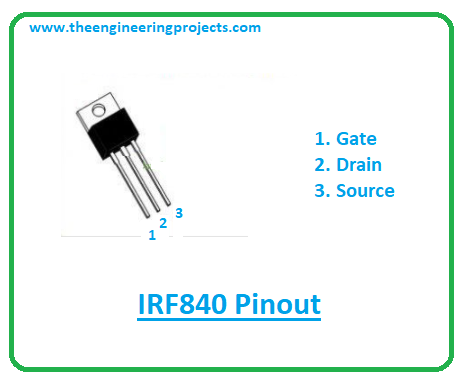 Mind it… generally, the MOSFET is a four-pin component that contains four-terminal called a Source (S), Gate (G), Drain (D), and a Body (B) / Substrate. The bodyside is always connected with the source pin. So we generally call the MOSFET a three-terminal device.

The following are the equivalent to IRF840.

The IRF840 is used in the following applications.

That was all about the Introduction to IRF840. Hope you enjoyed reading this article. If you’re unsure or have any questions, you can pop your query in the section below. I’d love to help you the best way I can. You’re most welcome to share your thoughts around the content we share so we keep sharing quality content based on your needs and requirements. Thank you for reading the article.