Hey Fellas! I always come with unique topics to whet your appetite with valuable information so you can excel in your relevant field. Today, I am going to unlock the details on the Introduction to 2n2646. It is a uni-junction transistor which is mainly used in thyristor triggering circuits, sensing circuits, and pulse and timing circuits. It features low peak point current of about 5µA, and low emitter reverse current of 0.005µA and passivated surface for uniformity. Let’s dive in the details of this transistor and explore what it does and what are its main applications? Let’s get started. 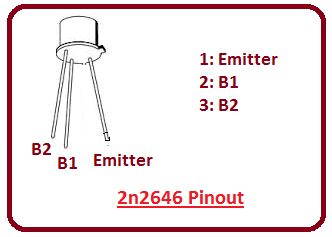 Absolute maximum ratings of 2n2646 is shown in the figure below.

Electrical characteristics of 2n2646 are shown in the figure below.

That’s all for today. I always try to sort out information into small steps so you can digest the information easily. I hope you have enjoyed the article and got a clear idea what this UJT does and what are its main applications? However, if still you feel skeptical or have any doubt you can ask me in the comment section below. I’ll help you according to best of my expertise. Stay Tuned!