Hey Guys! Hope you are doing well. You can use the above calculator for temperature conversion from Kelvin to Rankine scale. It is commonly known as the Kelvin to Rankine Converter. Just put the values in Kelvin Scale that will instantly convert it to Rankine Scale in one click.

The temperature scales give you the flexibility to convert any value from one scale to another without wrestling your mind for converting them manually.

In words we can define, temperature value in the Rankine scale is equal to the temperature in Kelvin times 9/5.

As we know the given formula is

The temperature value of 70 in the Kelvin scale will be equal to 126 on the Rankine scale. 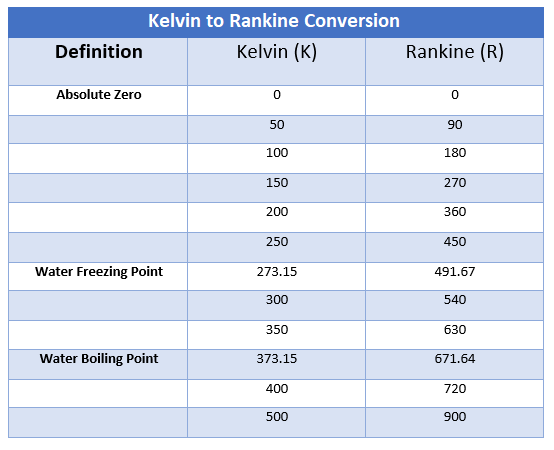 Kelvin is a thermodynamic temperature scale, based on Absolute Zero that is defined as the temperature at which all thermal motion seize to flow. It is denoted by K without degree sign, unlike the other three scales i.e. Fahrenheit, Celsius and Rankine that are mainly written with a degree sign.

The Kelvin scale is named after physicist Baron Kelvin who indicated the need of “absolute thermodynamic scale.

Rankine temperature can be described as an absolute scale of thermodynamic temperature. It is named after William John Macquorn Rankine who proposed it in 1859.

Rankine scale is denoted by R and is mainly used in heat computations in the engineering systems widely use this scale for the temperature measurements.

The zero in the Rankine scale shows Absolute Zero which is also equal to the zero in Kelvin scale. Although both scales share a common value at Absolute Zero, they don’t increment with regular intervals afterward, terming different values for boiling and freezing point of water where water freezes at 273.15 K or 491.67 ºR and boils at 373.15 K or 671.64 ºR.

This is enough for today. I hope you have found this post informative and useful with a necessary tool for converting the Kelvin scale to Rankine scale. If you are unsure or have any question, you can approach me in the comment section below. I’ll try and guide you according to the best of my expertise. You are most welcome to feed us with your valuable feedback and suggestions, they help us provide you quality work so you keep coming back for what we have to offer. Thanks for reading the article.