Solar power is now generating the cheapest electricity in history, a new report by the International Energy Agency reveals. Harnessing energy from the sun via solar panels is key to reducing greenhouse gas emissions and creating a sustainable world. Heavy investment in solar infrastructure will also play a much-needed role in this transition. In turn, solar energy is creating a diverse range of careers for engineers, including industrial engineering, mechanical engineering, electrical engineering, and material science and chemistry.

In recent years, solar panels have become increasingly efficient and affordable. As such, commercial install projects are becoming more and more in demand. Commercial solar panels can help businesses successfully decrease operating costs, reduce tax liability through government credits, and boost profits by differentiating from competitors. Industrial engineers are largely responsible for these recent improvements in solar panel technology; their job is to optimize the technologies and production methods used to manufacture solar components. Specifically, industrial engineers devise and test various mathematical models with the aim of minimizing waste.

Demand for solar panels is undoubtedly increasing at a rapid rate. Mechanical engineers play a vital role in ensuring the supply process keeps up with the demand by keeping it extremely smooth and streamlined, as well as looking for ways to improve both the product and the system. They may work in either a laboratory, production plant, or engineering firm. Essentially, mechanical engineers deal with the machinery and equipment used to automate the manufacturing process.

For example, they’ll spend time researching, creating, and testing key industrial equipment, such as the machines used to cut silicon wafers. These wafers will then be formed into solar cells and used to form a functioning solar panel. Moreover, mechanical engineers may also supervise the creation of electric generators, along with other vital equipment used in solar power plants. Some mechanical engineers oversee the design phase, which involves utilizing computer-aided design (CAD) software to map out and develop design ideas. This process is followed up with research, developing prototypes, and testing. Just like industrial engineers, mechanical engineers can look forward to a strong employment growth outlook of 9% from 2016-2026 with a similar average salary of $87,370 annually. 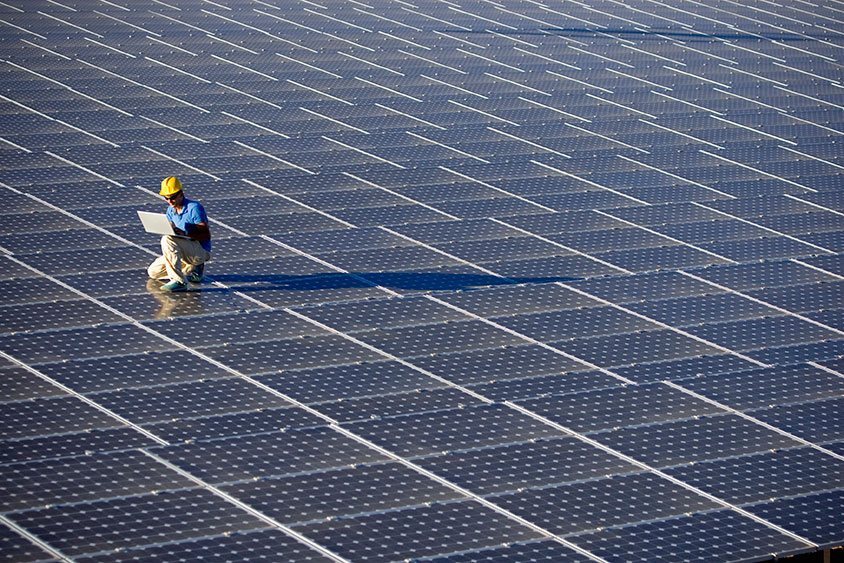 An inverter is one of the most important components in the generation of solar power; it converts direct current (DC) electricity (generated by solar panels) into alternating current (AC) electricity that’s used by the electrical grid. Where do electrical engineers fit in? Well, they have the essential job of designing, testing, and refining inverters and other pieces of equipment in order for the sun to be converted into electricity. The future growth outlook for this profession is strong — 7% between 2016-2026. Moreover, electrical engineers can also enjoy a higher salary than both industrial engineers and mechanical engineers ($99,070 a year on average).

Material scientists and chemists are similar career paths both responsible for developing the granular components that comprise solar panels. Material scientists, in particular, work with and analyze various materials in order to determine the most efficient for use. Space limitations and aesthetic considerations surrounding specific solar projects are also taken into account. In most cases, solar panels are currently able to transform between 15%-22% of solar energy into usable energy (this also depends on a host of factors including weather conditions, orientation, and placement). Material scientists are tasked with the responsibility of improving this figure. Chemists, on the other hand, have a similar job: they focus on researching and testing innovative solar cell design concepts, largely drawing upon their extensive knowledge of semiconductors and organic materials (solar cells are usually made from materials like organometallic compounds, crystalline silicon, and cadmium telluride). Similar to the other solar engineering careers, chemists and material scientists can also look forward to a 7% growth in these professions from 2016 to 2026 (which is an average rate of growth compared to all other occupations). You can also enjoy a lucrative salary as either a solar material scientist or chemist; the pay is just over $78,000 per year on average.

Solar energy is fast becoming the world’s most valued power source. Whether it’s in the realms of industrial, mechanical, electrical, material science or chemistry, engineers can enjoy a range of meaningful and fulfilling careers that support this important transition and help create a more sustainable world for future generations to enjoy.