Hi Friends! Hope you are getting along with life pretty well. Today, I’ll uncover the detailed Introduction to 2n5415 which is a PNP transistor mainly used for general purpose low-power amplifying and switching applications.

It comes with three layers: two P semiconductor layers and one doped N-layer where later is encapsulated between other two P-layers.

In this post, I’ll try to nail down everything related to 2n5415: its main features, working, and applications. Let’s dive in and explore the nitty-gritty of this electronic component.

2n5415 is a PNP transistor that is mainly used for general purpose low-power amplifying and switching applications.

The 2n5415 is incorporated with three terminals known as an emitter, base, and collector which are used for external connection with the electronic circuits.

The emitter is highly doped and contains 100% transistor current which then distributes between base and collector.

As the voltage is applied at the base terminal, it gets biased and starts drawing little current which plays a vital role to control large current at the emitter and collector terminals.

The PNP transistor is a current controlled device, also known as sinking device, where it sinks current into its base terminal and current flows out of the collector. 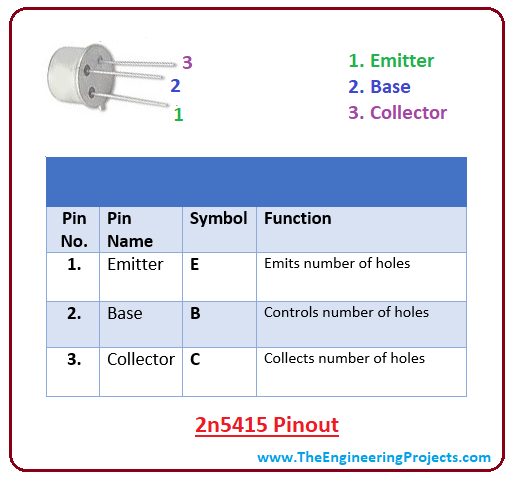 There are three main parts of the component 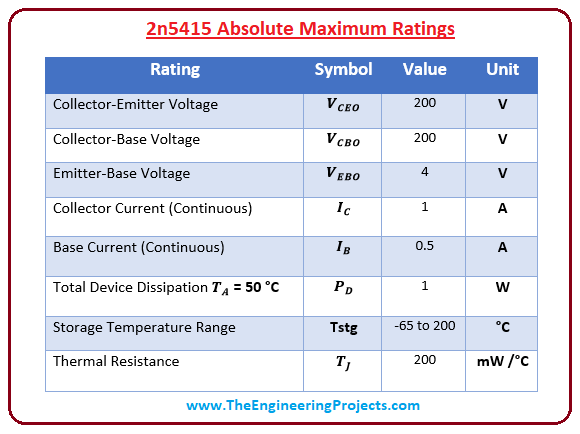 Similarly, if these ratings are applied for the maximum period of time above normal operating conditions they can affect the reliability of the device.

That’s all for now. I hope I have given you valuable information regarding this PNP transistor. If you are unsure or have any question, you can ask me in the comment section below. I’d love to help you in any way I can. You are most welcome to keep us updated with your valuable feedback and suggestions, so we keep producing quality content and you keep coming back for what we have to offer. Thanks for reading the article.