Hello friends, I hope you all are doing great. In today’s tutorial, we are gonna have a look at detailed Introduction to MSP430.  MSP430 is a microcontroller portfolio which offers different varieties of sixteen-bit Microcontrollers. These microcontrollers integrated with ultra-low power and digital and analog peripherals devices for sensing and measurement applications. MSP430 microcontrollers with non-volatile FRAM (ferroelectric random access memory) provides the lowest stand by power (350nA with RTC), 100 µA/MHz active power and have the capability to recover system state after sudden the power failures.

MSP430 used in different applications such as sensor systems which received analog signals and converts them into digital values and after processing send these values to host systems. In today’s post, we will have a look at its introduction, working, protocol, features, applications, etc. I will also share some links where I have interfaced it with other microcontrollers. If you have any questions please ask in comments I will resolve your problems. So, let’s get started with a basic Introduction to MSP430.

Now, we discuss its pinouts.

These are the main pinouts of MSP430 which are described below. 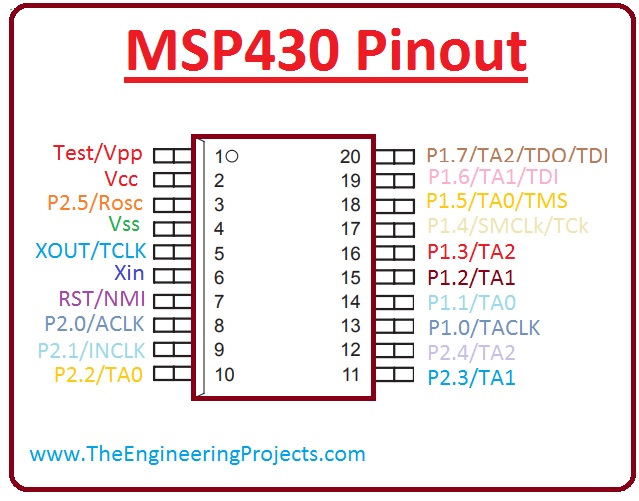 Now, we discuss the features of MCP430. So, friends, that’s was all about MSP430 If you have any question about it please ask I comments I will resolve your problems. Take care until next post.