You are here:
Embedded Systems

Hi Guys! I welcome you on board. In this post today, we’ll discuss the components of embedded systems.

An embedded system is a custom-built special purpose computer used for a specific purpose. It is a system that combines both hardware and software to perform a certain task.

It can be used as an individual system or a part of another large system. You will find embedded systems incorporated in a range of applications including consumer electronics, industrial machinery, automobiles, agriculture, processing industrial devices, airplanes, digital watches, vending machines, air-conditioners, mobile devices, and much more. 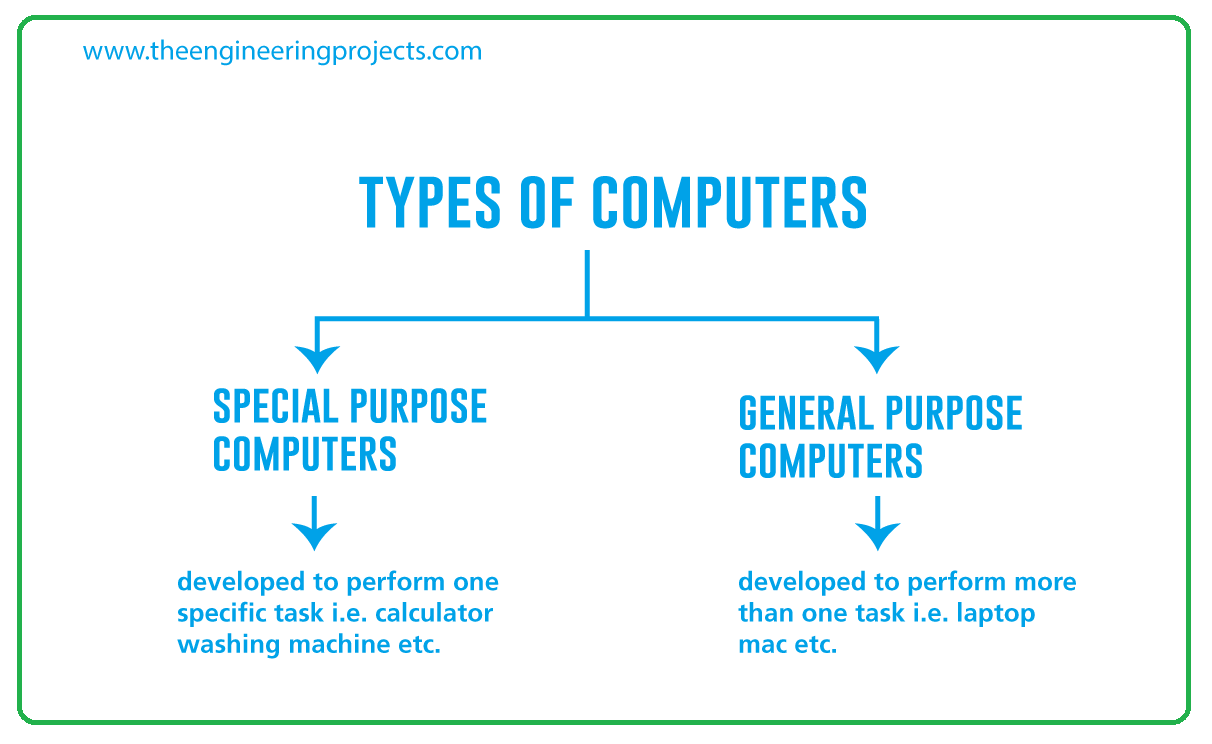 Read this post all the way through as we’ll discuss the basic components of embedded systems in detail. 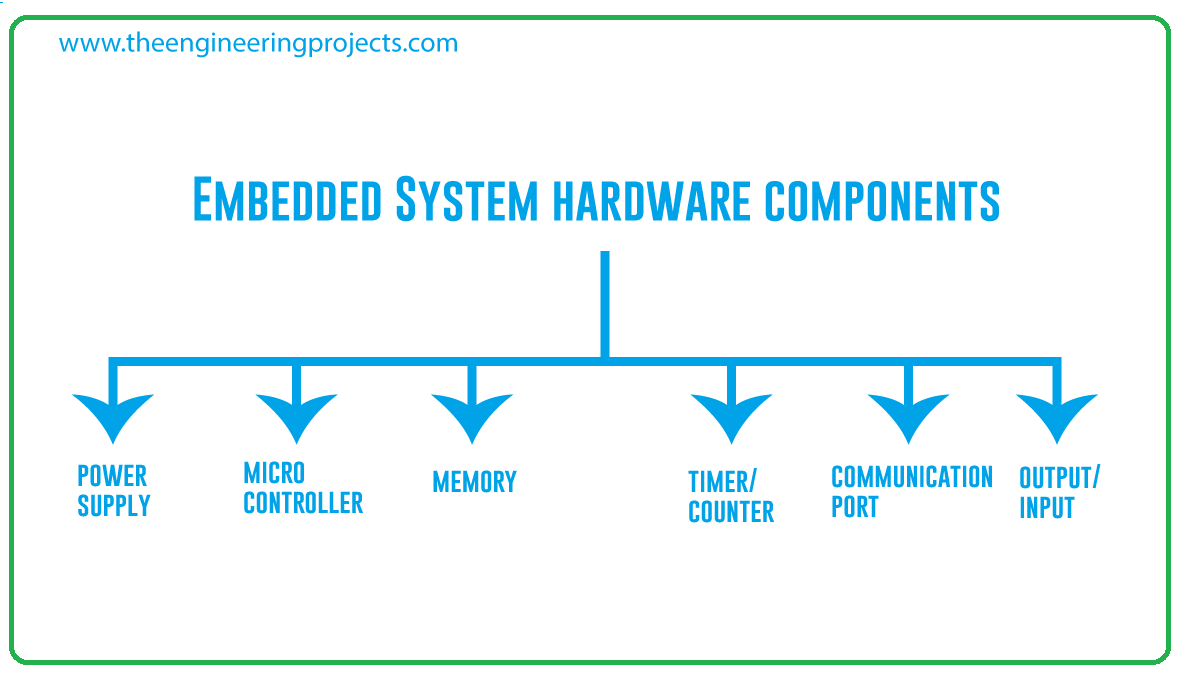 To work the embedded system properly, a smooth and efficient power supply is needed. Both wall adopter and battery can be used as a power supply. Some power supplies work as independent equipment while others are incorporated into the embedded technology they power.

There are two types of memories including ROM (read-only-memory) and RAM (random access memory). The former is called the code memory that stores the program code and is non-volatile which means it stays stored in the system when the power supply is removed. While latter is called the data memory and is a volatile memory which means it is used for temporally storing the information and is removed from the system when the power supply is turned off.

Sometimes you need to create a delay before a specific function. Timers are used in such cases. While at times you want to count the number of times a particular event occurs. Counters are used in such cases. If an up counter is used in the system, it will count up from the initial value to 0xFF and if it is down counter, it will count down to 0x00.  The counters are integrated using register-type circuits like a flip-flop.

Input is required to interact with the embedded system. A sensor can be used to provide input to the system. The microcontroller used in the system can be configured as an input or output port. In the microcontroller, there are a fixed number of input and output ports that you can utilize as per your requirement.

a. PCB (printed circuit board)

A resistor is an electrical component mainly used to produce resistance in the current flow. It is mainly employed to reduce the flow of current, for adjusting the signal levels. In power distribution systems and motor controls, resistors with high power are used that can dissipate more heat in the form of energy. Resistors are further divided into two types i.e fixed resistors and variable resistors.

The resistance of fixed resistors changes with temperature and variable resistors can be utilized as sensing devices for humidity, light, force, and heat. The resistor’s electrical function is dependent on its resistance. The more the resistance, the more it will create resistance in the current flow.

Transistors are used in the electrical circuit for amplification and switching purposes. They are divided into two main types i.e. bipolar junction transistors and MOSFETs (metal-oxide-semiconductor field-effect transistors). The former is the current-controlled device and comes with terminals like base, collector, and emitter. 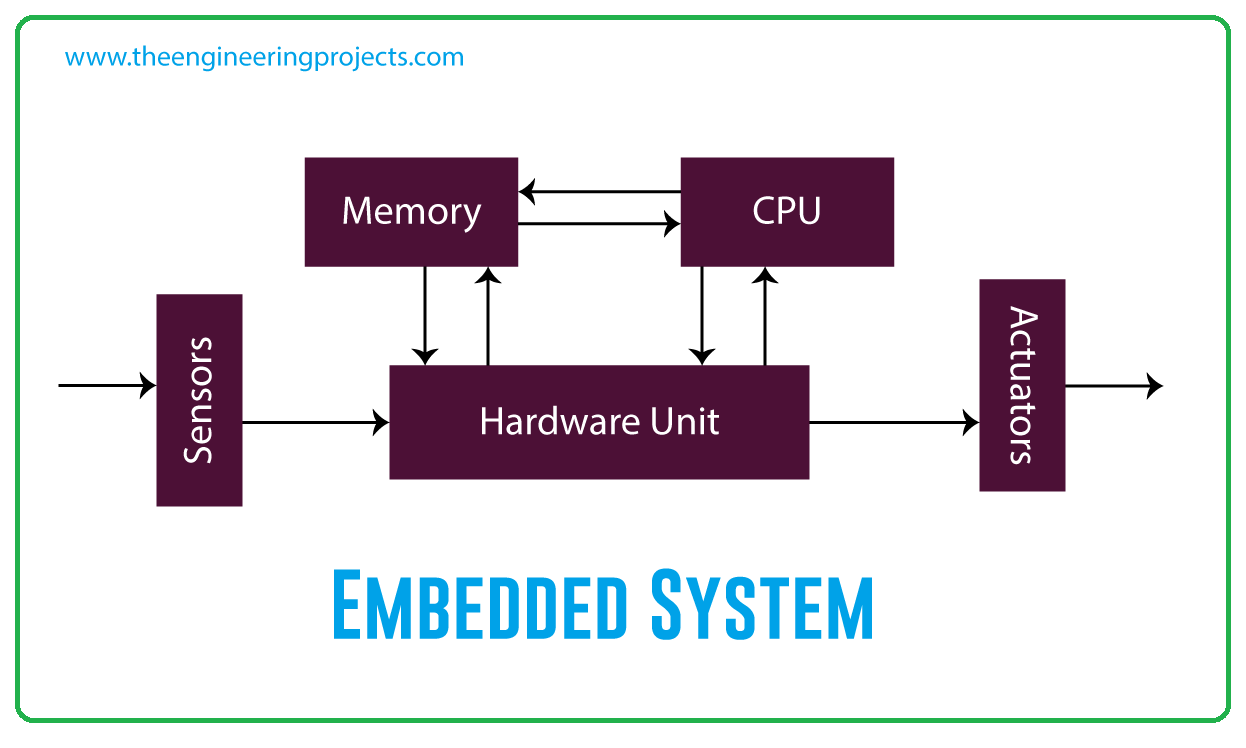 The latter is the voltage-controlled devices and comes with terminals like a drain, source, and gate. They are used in a range of applications including computers, stoves, pacemakers, aircraft, motor control, and much more. Their working principle is simple and straightforward. The small current at one terminal is used to produce a large current at the remaining terminals. This phenomenon is used for amplification purposes.

A diode is an electrical component that uses PN-junction and allows the current to flow in one direction only. Mostly didoes are made of semiconductor material like silicon but some diodes are also composed of germanium. Diodes are used in a range of applications including signal mixers, switches, voltage regulators, logic gates, clippers, limiters, clampers, and gain control circuits.

An integrated circuit is a chip that combines various electrical components into a single chip. An IC is a ready-made chip that you incorporate into your electrical project without having to include lots of capacitors and resistors. A small integrated chip can work as an oscillator, amplifier, microprocessor, timer, and computer memory. If you open the CPU of your computer, you will find scores of ICs integrated into the motherboard of the computer. A single IC can hold hundreds of thousands of resistors, transistors, and capacitors inside.

LED (light-emitting diode) is widely used in electronic circuits. LEDs are included in circuits for some indication to check if the circuit is working properly. This electrical component is so reliable and can last decades without decaying. Using LEDs you can identify the state of current in an electrical circuit. For example, you can integrate LED into your circuit where the blinking of LED will indicate the circuit is working properly.

An inductor is an electrical component used to store energy in an electric field in the presence of an electrical current. The inductors come with an insulated wire that circles the coil. These electrical components work on Faraday’s law of induction where the electric motive force is induced in the conductor by varying magnetic fields in the presence of current passing through the coil. Inductors are employed to block AC while permitting the DC to flow. Inductors utilized for this purpose are named… chokes. 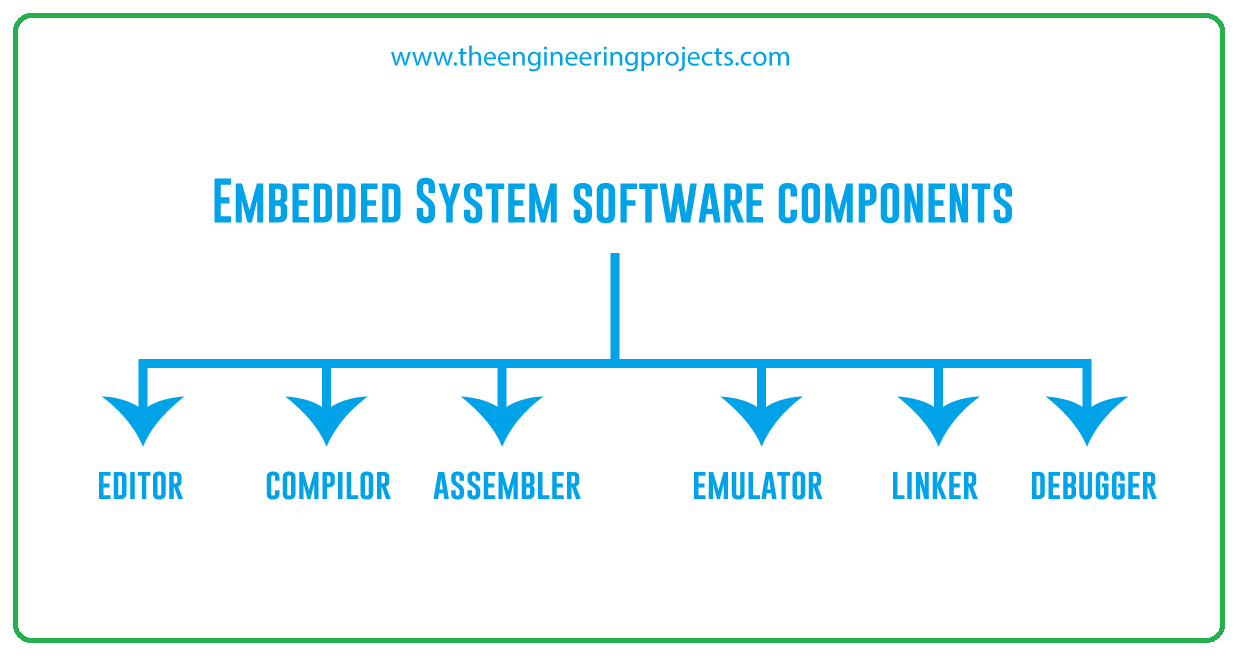 The following are the software components of embedded system. 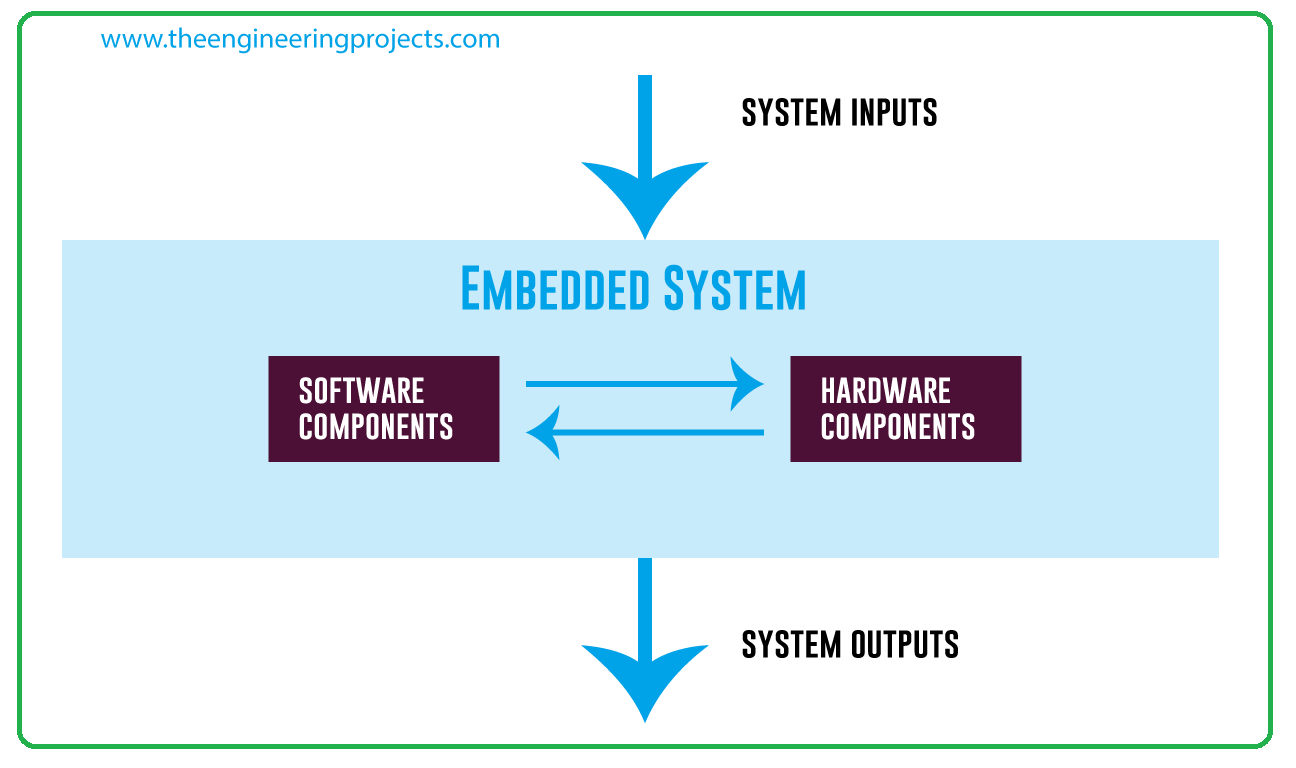 That’s all for today. Hope you find this article helpful. If you have any questions, you can approach me in the section below. I’d love to help you the best way I can. Feel free to share your valuable feedback and suggestions around the content we share. They help us produce quality content customized to your exact needs and requirements. Thank you for reading this article.

Why you should select JLCPCB – An Outstanding PCB Fabrication House
May 7, 2018