Hi Friends! Hope you are doing well. I am back to give you a daily dose of useful information so you can excel and improve as per your technical needs and requirements. Today, I’ll uncover the details on the Introduction to ATmega8. It is an 8-bit AVR microcontroller that is based on RISC CMOS technology and comes with a 28-pin interface for the PDIP package. The Program memory is 8K Flash while RAM and EEPROM are 1K and 512 bytes respectively.

Microchip has been the main source for producing PIC and AVR microcontrollers that are mainly used in embedded and industrial automation systems. These modules can perform a number of functions on a tiny chip, preventing you from spending too much and purchasing external components for laying out automation in the relevant project.

In this post, I’ll cover each and everything related to this tiny chip including main features, pinout, pin description, functions, the compiler used and everything you need to know. Let’s get down to the details of this onboard module: 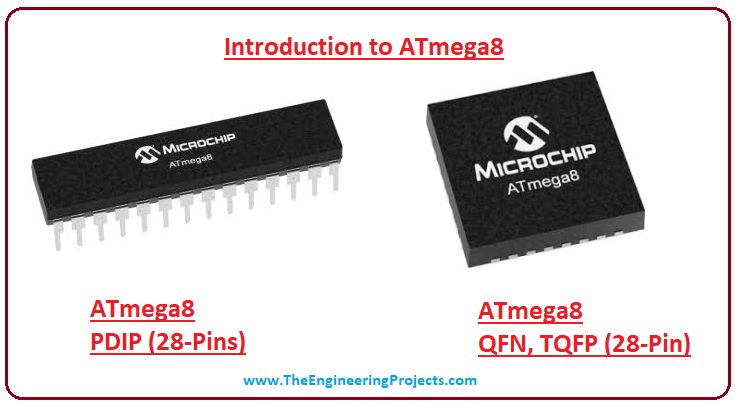 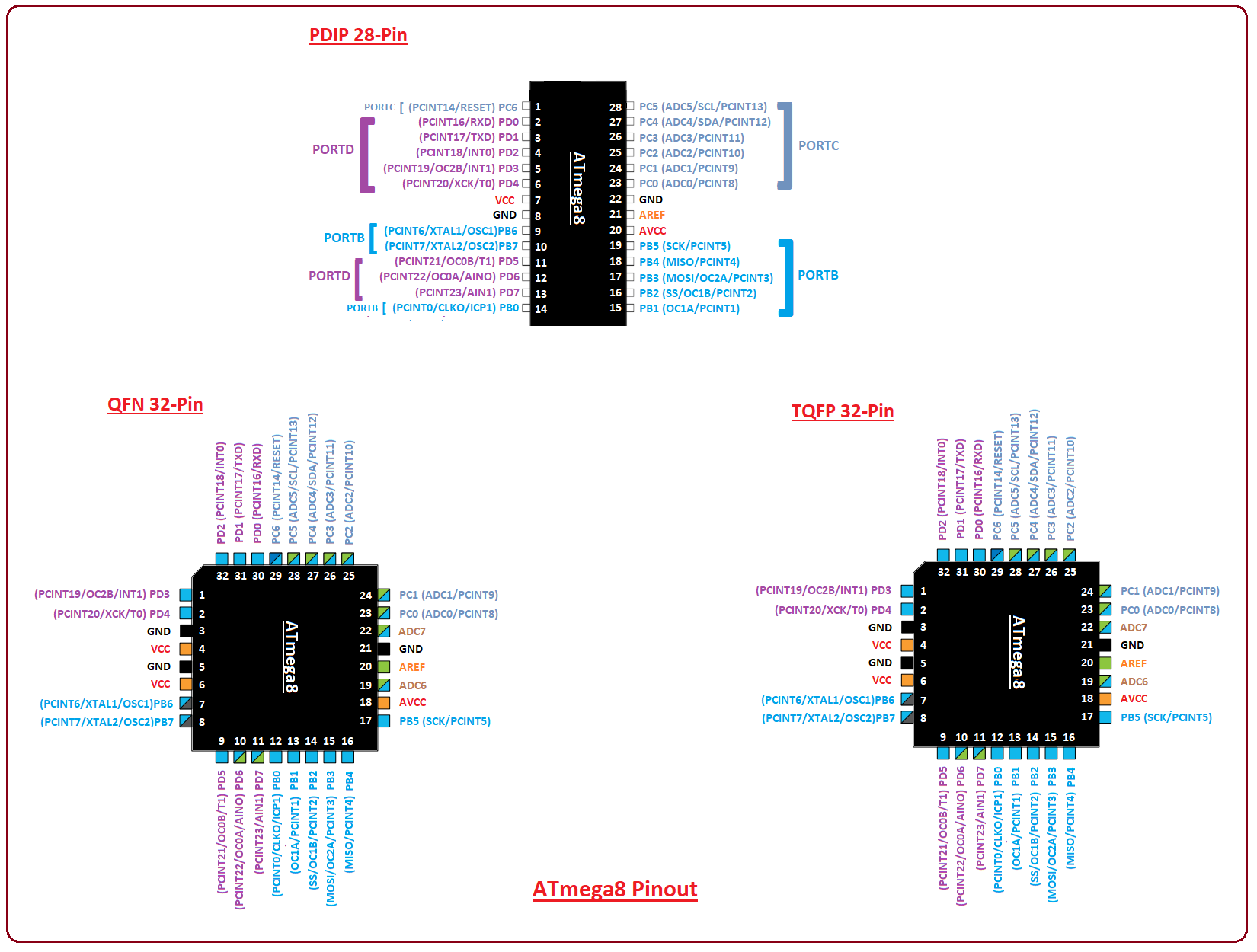 Atmega8 incorporates three timers where two are 8-bit and one is a 16-bit timer.  These timers can be used both ways i.e. timer as well as a counter where the former is used to create the delay in any running function, controls the internal functions of the controller and increments the instruction cycle, while later is used to count the number of intervals by incrementing the rising and falling edge of the pin and is mainly used for external functions. Apart from these timers, two other timers are included in the device named as

An oscillator start-up timer is used to make the crystal oscillator stable by resetting the controller. And power-up timer generates a minor delay once you power on the device, helping in stabilizing the power in order to generate power signals with continuous intervals.

Five Sleep Modes are incorporated into the device that helps in saving power. These modes include:

The BOD, also known as BOR (Brown Out Reset), is used to resetting the module once the Vcc (voltage supply) goes below a brownout threshold voltage. It is important to note that, the Power Up Timer must be enabled for creating a delay and helping in bringing back the device from a BOD function. In this mode, multiple voltage ranges are created to protect the module once the power drops at the voltage supply line.

ATmega8 comes with a serial peripheral interface (SPI) – A communication module that helps in establishing communication between the microcontroller and other peripheral devices such as shift registers, SD cards, and sensors. It incorporates a separate clock and data lines with the addition of a select line for selecting the relevant device for communication.

Two pins used for SPI communication are as follow:

The MOSI pin receives the data when the controller acts as a slave. And MISO plays a vital role in sending data by the controller while later is put in the slave mode.

ATmega8 incorporates a built-in watchdog timer that resets the controller if the running program hangs up during compilation or gets stuck in the infinite loop. The watchdog timer is nothing but a countdown timer.

The interrupt hints at a call of emergency that puts the main function on hold until the required instruction is executed. The controller goes to the main program once the interrupt is called and executed.

The former is a clock signal that synchronizes the data transfer between the devices and is produced by the master device, while the latter is used to carry the required data.

The memory space in the controller is the manifestation of the linear and regular memory map. This AVR module comes with a Harvard Architecture that houses separate memories for both data and program.

The Fast Access File Register comes with 32 x 8 – Bit general purpose working registers that can be accessed with the single clock cycle that assists in performing the ALU (Arithmetic Logic Unit) operation where the result is stored in the Register File.

If you are new to a microcontroller, you may be a little skeptical about the compiler you can use for writing and compiling the code into your AVR controller. I’ve combined some of the basic compilers where some are better than others in terms of efficiency. Although the free versions may lack some features, they are recommended to start with as a newbie to get hands-on experience with the AVR controller.

ATmega8 can be interfaced with Arduino for the development of the embedded project.

The following figure shows the interfacing of ATmega8 with Arduino. 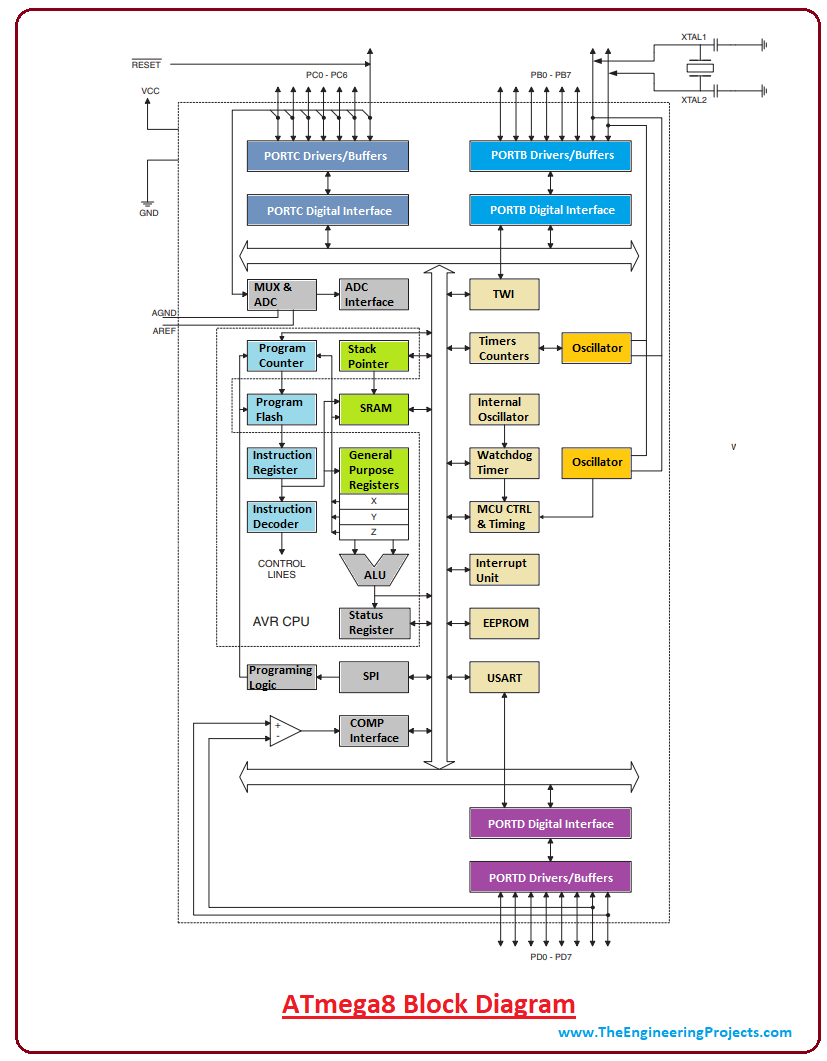 That’s all for today. I hope you have found this article information. If you are unsure or have any questions, you can approach me in the comment section below. I’d love to help you the best way I can. Feel free to feed us with your valuable suggestions – they help us provide you quality work. Thanks for reading the article.