Hey Guys! Welcome you onboard. Today, I’ll discuss the details on the Introduction to IRF4905. It is a P-Channel HEXFET Power MOSFET available in a TO-220AB package and is based on Advanced Process Technology. It is mainly used for fast switching purpose, capable of providing ultra-low on-resistance.

This tiny device comes with three terminals called gate, drain and source where the gate terminal is used to control the current on remaining two terminals. The area between source and drain is known as a channel that is widely dependent on the voltage applied to the gate terminal.

In this post, I’ll cover each and everything related to this P channel MOSFET, its main features, working, pinout and applications. Let’s jump right in and explore everything you need to know. 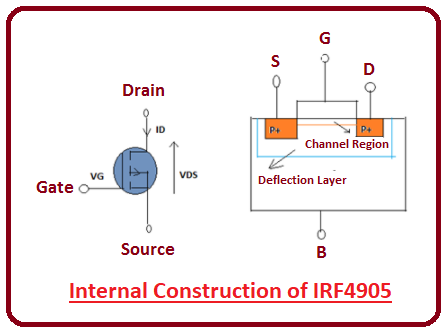 That’s all for today. I hope you have found this article useful. If you are feeling skeptical or have any question, you can ask me in the comment section below. I’d love to guide you according to the best of my expertise. You are most welcome to feed us with your valuable suggestions – they help us provide you quality work as per your needs and requirements. Thanks for reading the article.