Hey Guys! Hope you are doing well. I always strive to keep your technical needs and requirements quite in line with valuable information that helps you excel and thrive in engineering and technology. Today, I’ll unlock the detailed Introduction to S8050 that is an NPN Epitaxial Silicon Transistor mainly used for push-pull amplification and general purpose switching applications.

It is a low voltage and high current transistor, featuring collector current up to 700 mA and Collector-Emitter voltage around 25 V.

I’ll try to cover each and everything related to S8050, so you don’t have to scratch your head browsing the whole internet and find all the information in one place. Let’s dive in and kick off the nitty-gritty of this transistor.

S8050 is an NPN Epitaxial Silicon Transistor that comes with low voltage and high current capabilities. It proves to be a bright spot for push-pull amplification and general purpose switching applications.

These terminals are different in terms of doping concentration where emitter terminal is highly doped as compared to base and collector terminals.

This transistor incorporates three layers where one P-doped semiconductor layer is encapsulated between the other two N-doped layers. The P-doped layer represents the base terminal while other two layers represent emitter and collector respectively.

The amplification is carried out a simple way when a voltage is applied at the base terminal, transistor draws small current which is then used to control large current at other terminals.

Following shows the pinout of this transistor. 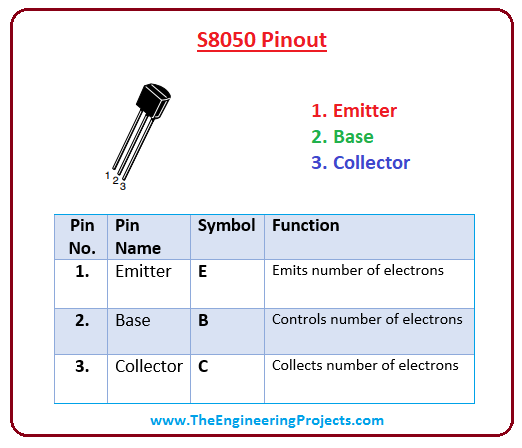 The electron movement is mainly triggered by the voltage applied at the base terminal, resulting in the diffusion of electrons from the base to collector terminal.

The number of electrons entering the base terminal from the emitter is greater than the number of holes diffusing into the emitter region that’s why electrons are major charge carriers in case of NPN transistor.

Following figure shows the circuit diagram of the S8050. 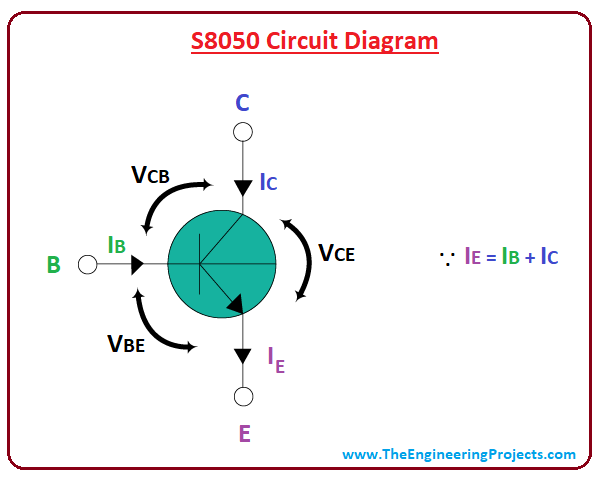 The collector is made physically larger than the base for two reasons: allowing a collector to deal with more heat without damage and increasing the chance of carriers that enter the collector terminal.

The common-emitter current gain is a ratio between collector current and base current. This is called Beta, denoted by β, and more often than not ranges between 20 to 1000, however, the standard value is taken as 200. 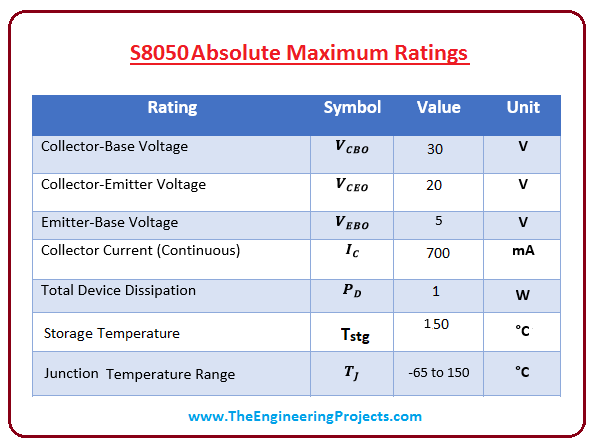 These ratings are determined on the basis of the maximum junction temperature of 150 °C.

That’s all for now. I hope I have given you everything you needed to know about S8050. If you are unsure or have any question, you can ask me in the comment section below. I’d love to help you the best way I can. You are most welcome to keep us updated with your valuable suggestions, they help us provide you quality work. Thanks for reading the article.