Hello friends, I hope you all are doing great. In today’s tutorial, we are gonna have a look at detailed Introduction to TIP122.  It is a Darlington braces NPN transistor. It works like an ordinary NPN transistor, but as it consists of a Darlington pair it has a decent collector current assessment of nearby 5 amperes and it’s gain is around 1000. This transistor can bear 100 volts around collector and emitter terminals due to this feature it can be used for high loads.

This is a common purpose transistor it used in different industrial projects. It manufactured for less time taking switching submissions. In today’s post, we will have a look at its protection, wreck, distinction, entitlements, etc. I will also share some links where I have connected it with other microcontrollers. You can also get more material about it in comments, I will guide you more about it. So, let’s get started with a basic Introduction to TIP122.

Let’s see a diagram of the TIP122 pinout: 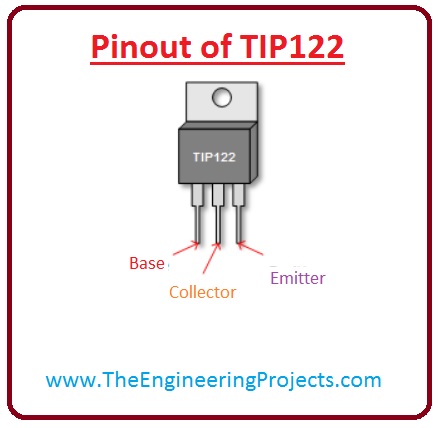 So, that was all about TIP122 if you have any question about it please ask in comments. I will reply to you as soon as possible. Thanks for reading.