In this tutorial, we are going to implement another application of pulse width modulation technique which is ‘Direction and position control of a servo motor’ with Raspberry Pi Pico module and MicroPython programming language.

Later in this tutorial, we will also discuss how to control the position of a servo motor with push buttons (to be used as control inputs) and also to use LEDs for indication purposes.

What is Servo Motor?

Before interfacing the servo motor with the Raspberry Pi Pico module, let’s first understand the behavior of a servo motor and how it is different from a DC electric motor.

A servo motor is a low-cost, high-power output device that can only rotate 180 degrees (90 degrees in each direction) and can control the angle of rotation anywhere within that 180-degree range. 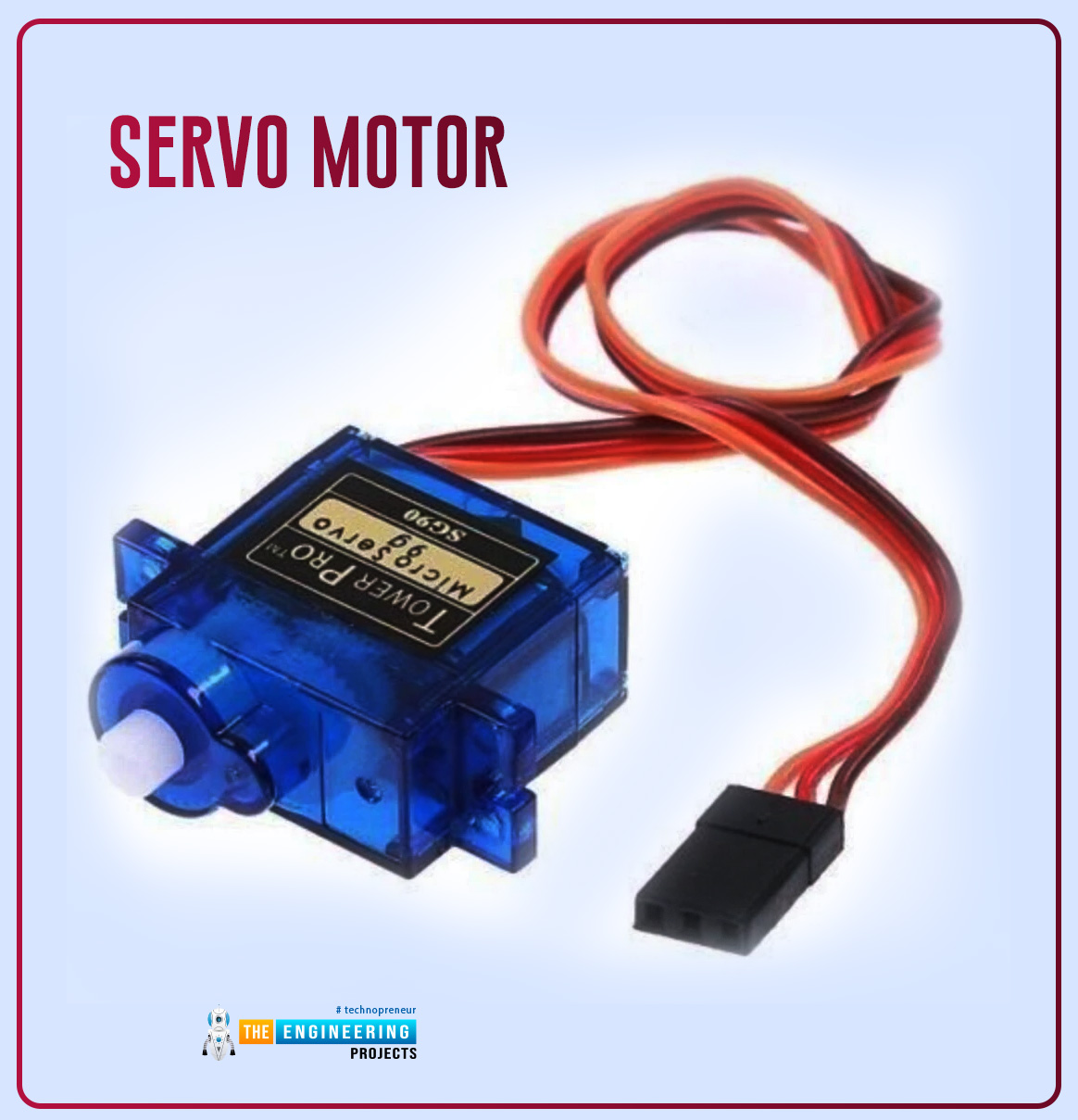 Technically speaking, a servo motor is a linear or rotary actuator that can control acceleration, linear or angular position, and velocity with precision. It consists of a motor and a position feedback sensor. It also requires a sophisticated controller, which is often a dedicated module designed specifically for use with servo motors.

The main feature of using a servo motor is that it has angular precision, which makes the motor capable of rotating as far as we want it to before stopping and waiting for the next input signal from the microcontroller (or Raspberry Pi Pico in this project). Unlike a standard DC electric motor, the servo motor starts turning as soon as the power supply is applied to it and continues to rotate until the power is turned off. On the other hand, we cannot restrict the rotational progress of the DC motor, but we can control its speed of rotation and turn it on and off or we can say that the DC motor does not have angular precision. Small servo motors are available there in numerous Arduino launcher kits (beginners) since they are simple to use in small electronic projects and applications.

A servo motor is mostly used in obstacle detector/avoidance robots and robotic arms.

We have already published tutorials on how to download and install the above mentioned software components.

Follow the given link for a detailed study of Raspberry Pi Pico: https://www.theengineeringprojects.com/2022/04/getting-started-with-raspberry-pi-pico.html

A servo motor is controlled by sending a PWM or pulse width modulated signal. A servo motor can only turn for a total of 180 degree movement (90 degree in either direction).

Pulse width modulation technique is used to control the amount of power delivered to the load for a particular time. The pulse width modulated signal sent to the motor specifies the position of the shaft, and to turn the rotor into a desired position depending on the duration of the pulse sent through the control wire.

The major factors affecting the behavior of pulse width modulation are frequency and duty cycle. Frequency defines the number of cycles per second or it is the reciprocal of total time ‘T’.

The duty cycle determines the time for which the output pulse from the Raspberry Pi Pico is high.

Servo motor consists of three wires; red, brown and yellow. Two wires are for VCC and ground and the third one is the data or control pin. The servo motor we are using operates at 5V dc supply so the red wire of the motor is connected to the VBUS pin of raspberry Pi Pico board. The interfacing of servo motor with raspberry Pi Pico module is shown in Table1.

In this tutorial, we are going to use Thonny IDE to program the Raspberry Pi Pico board.

We have already published a tutorial on installing Thonny IDe for Raspberry Pi Pico Programming on our website. Follow the given link to install the IDE: https://www.theengineeringprojects.com/2022/04/installing-thonny-ide-for-raspberry-pi-pico-programming.html

Steps to write a program for LED brightness conrtol are: 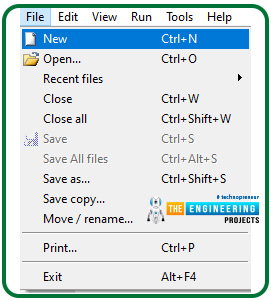 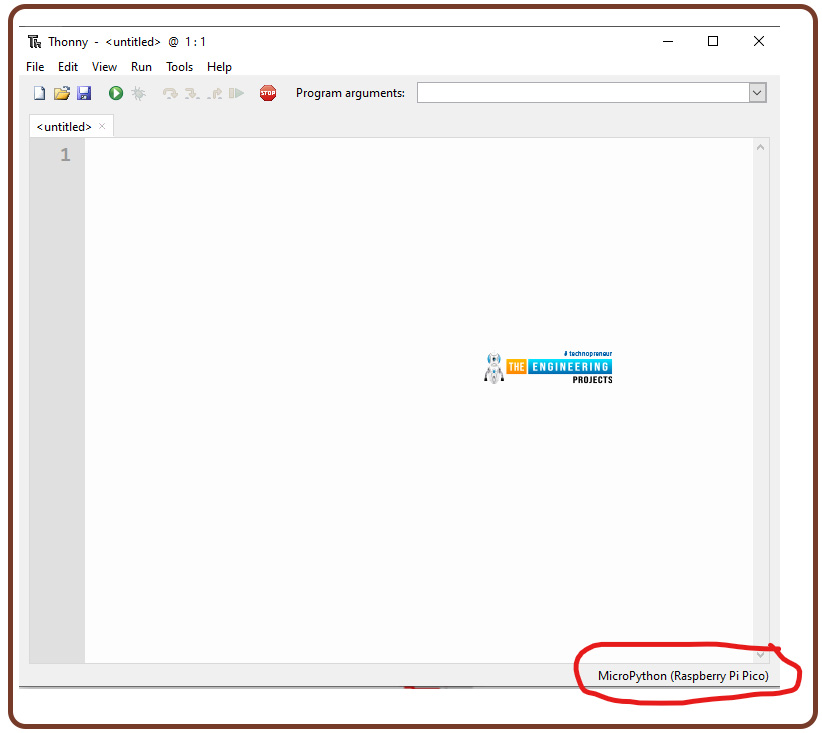 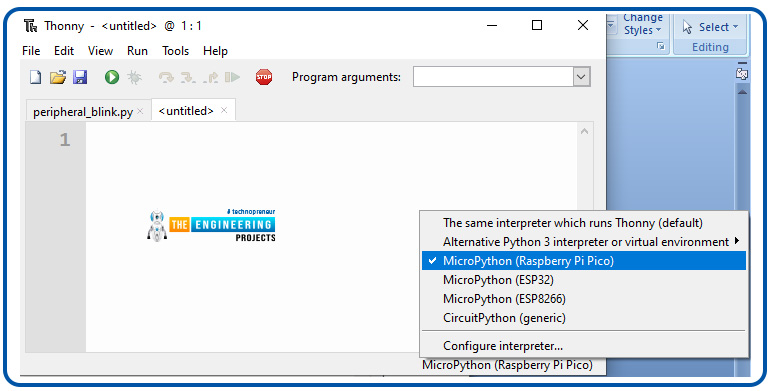 Save and test the program 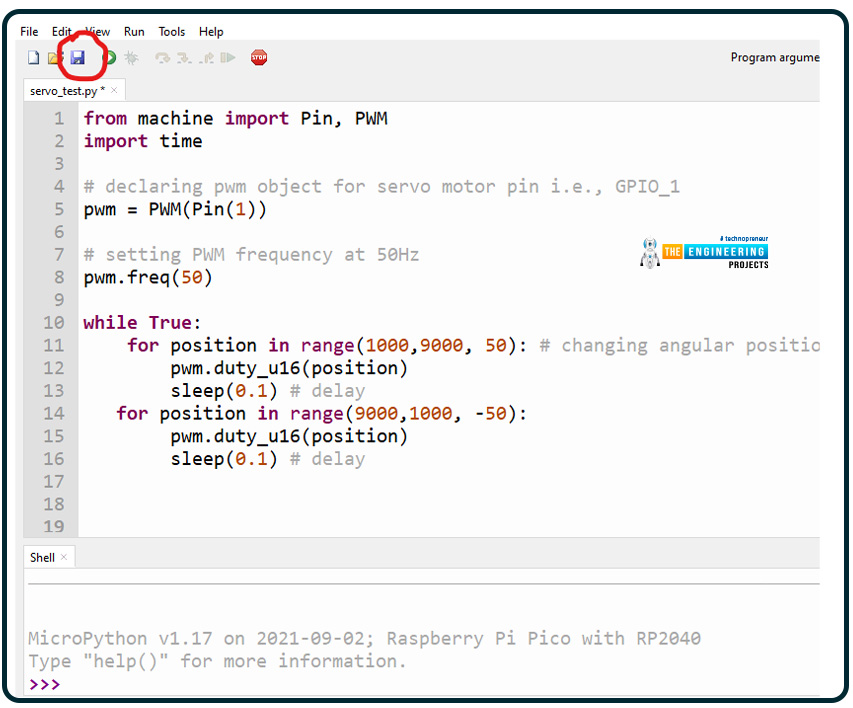 Fig. 13 Save the program 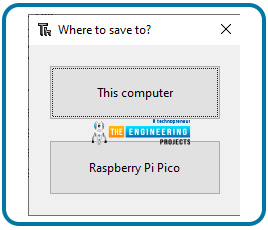 Fig. 14 Save the program 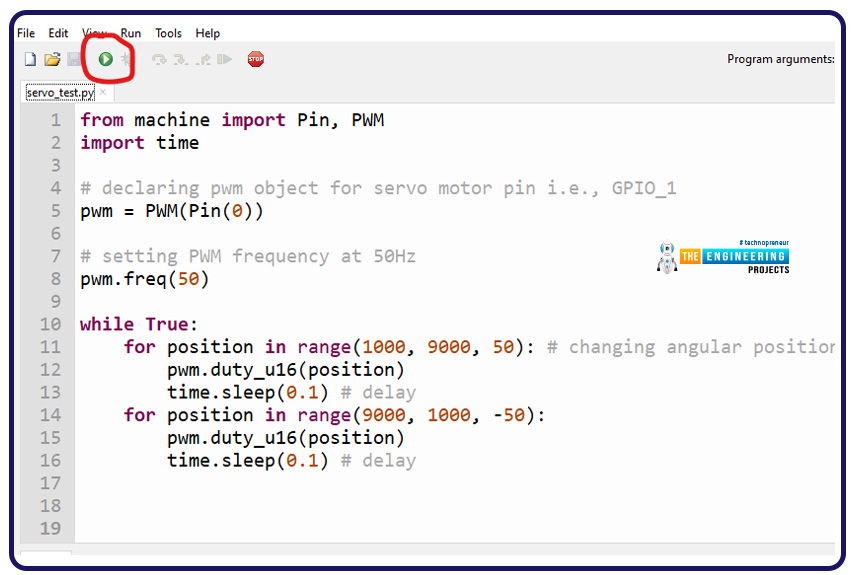 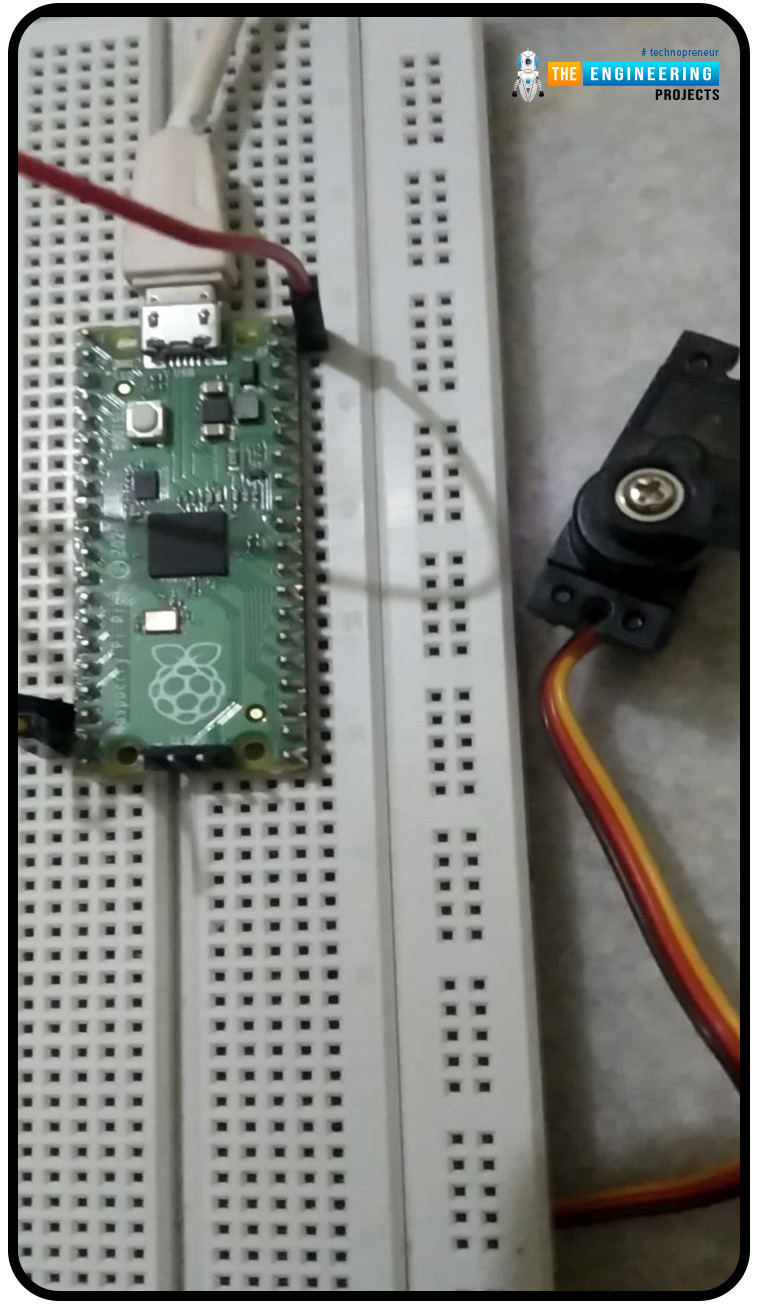 That’s all about interfacing and controlling a servo motor with Raspberry Pi Pico module and pulse width modulation.

Now let’s take another example, where we are going to control the direction of rotation of a servo motor using push buttons which are acting as control inputs and we are also using LEDs (outputs) as indicators for various positions.

GPIO stands for General Purpose Input Output which means a GPIO pin can be configured both either as an input or an output pin. In raspberry Pi Pico (RP2040) module we have 30 GPIO pins and hence any of them can be used either as input or output pin.

Push button is used as an input component to trigger some event or an interrupt in microcontrollers. So here in this example, we are using some push button as control inputs to control the direction of rotation in a servo motor.

A schematic is attached below representing the interfacing of a push button with raspberry pi Pico: 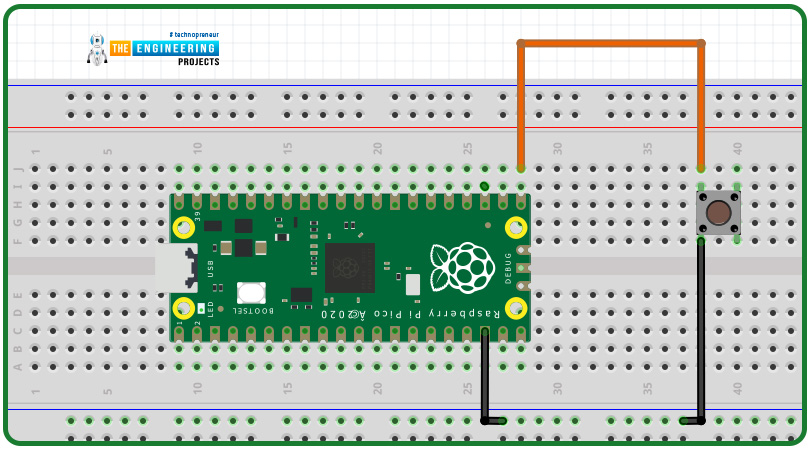 Most of the programming instructions will remain similar to the previous example with some additional instruction to interface LEDs and Push buttons and assigning their respective task. 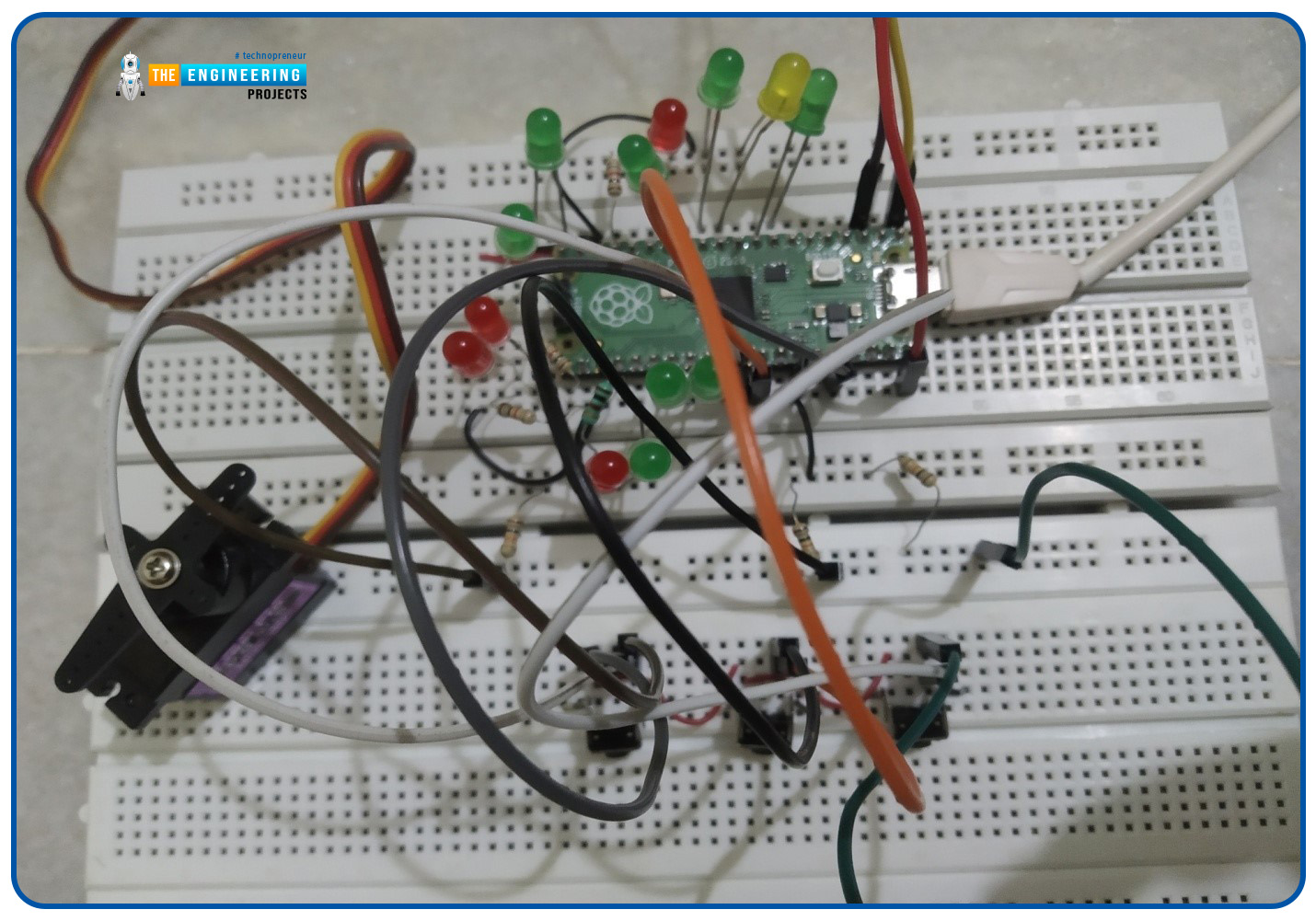 The results observed are attached below. In the image attached below, we can see the difference in the servo motor’s shaft position when compared with the previous image (off state). 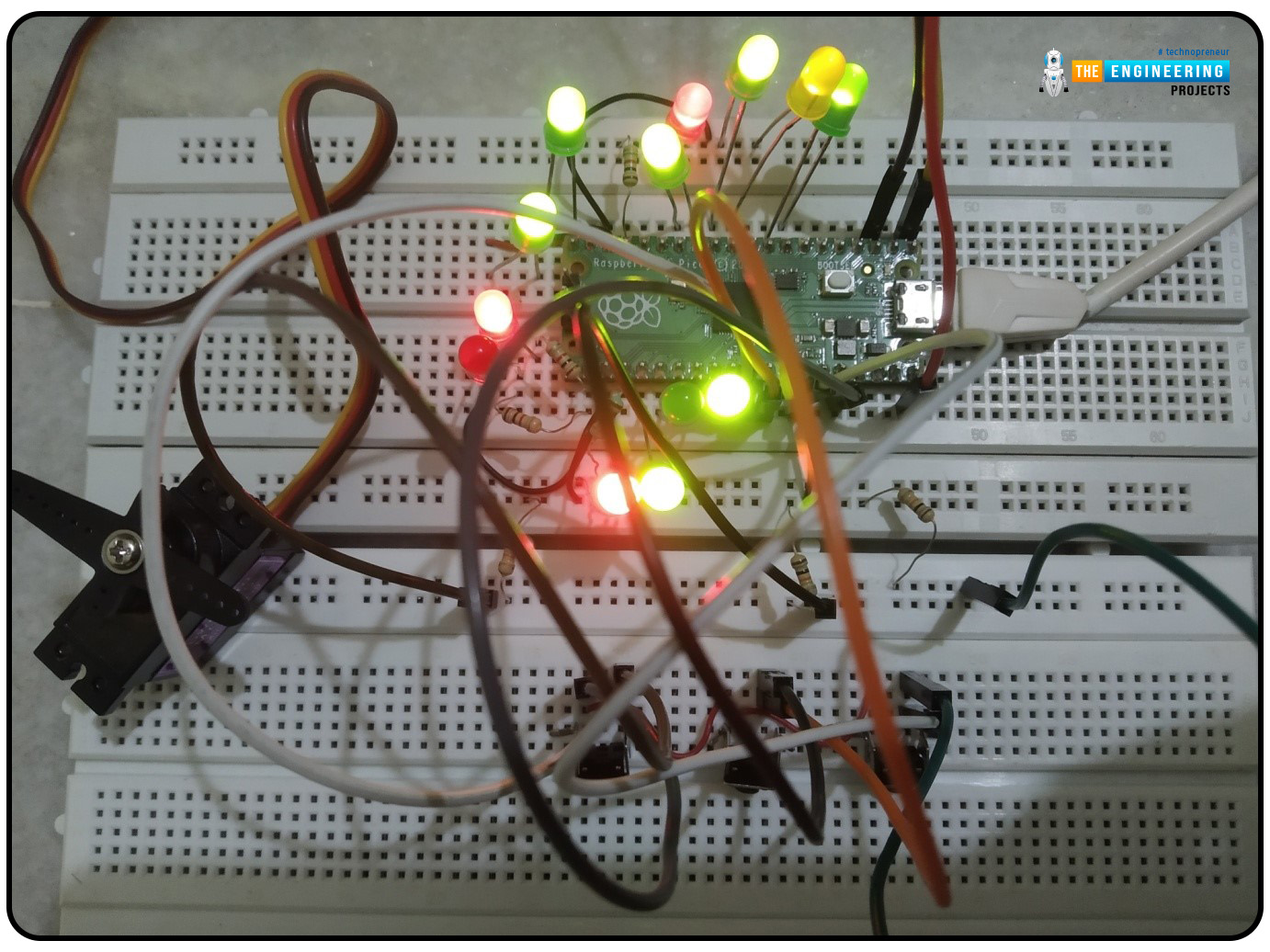 In this tutorial, we implemented another application of Pulse width modulation technique with Raspberry Pi Pico module and MicroPython Programming language. We also learn how to use Raspberry Pi Pico’s GPIO pins to receive input from peripheral devices.

So, this concludes the tutorial. We hope you found this of some help and also hope to see you soon with a new tutorial on raspberry Pi Pico programming series.