Hey Friends! Hope you are doing great. I am here to provide you the technical knowledge that helps you stay ahead of your competitors. Today, I am going to unlock the details on the Introduction to 2n5884. It is a power PNP bipolar junction transistor mainly used for general purpose amplification and switching purpose. This is a complementary silicon epitaxial-base transistor that can support 25 A and 80 V. I’ll discuss each and everything related to this transistor i.e. what it does, its pinout, circuit diagram and main applications.

You must have a look at comprehensive read on Introduction to Bipolar Transistor if you are unsure how these bipolar transistors work.

Let’s dive in and explore everything you need to know about this PNP transistor. 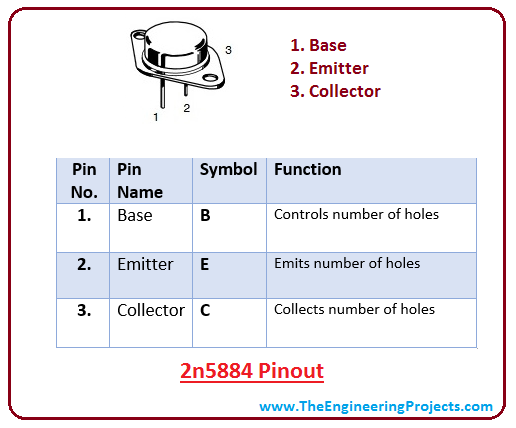 You must also have a look at following transistors of same nature used for amplification, switching, and different electronic applications.

That’s all for today. I hope you have found enough information about this component. In case you are feeling unsure or have any question, you can ask me in the comment section below. I’d love to help you according to best of my knowledge and expertise. Keep your suggestions and feedback coming, they allow us to give you quality content that aligns with your field of interest. Thanks for reading the article.