Hey Mentees! Welcome from the team of The Engineering Projects. We hope You are having a reproductive day. To add more reproduction, let’s learn another Logical Circuit from scratch.

In this Tutorial, we’ll grasp the following topics:

Moreover, we’ll have small chunks of information in DID YOU KNOW Sections. At this instance, Let’s start the learning.

D-Type Flip Flops are important Logical Circuits and we Introduce it as:

D-Type Flip Flops have the ability to Latch or delay the DATA inputs and therefore are the improved version of the SR Flip Flop (In which the data shows the Invalid output when the inputs are HIGH) .

Recall that Flip Flops are the Logical Circuits that can hold and store the data in the form of bits and are important building blocks of many of electronic devices and circuits.

The D Flip Flop is also known as the Data Flip Flop.

When we observe the circuit of D Flip Flop we observe 2 Important points in the D flip Flops:

IC’s play a magical role in the world of electronics. They make the circuit so simple and decrease the chances of the errors in the circuit. for D Flip Flop, the IC Used has a number CD4013 and for better understanding, D Flip Flop IC named 4013 is shown in the Proteus software in the image below: 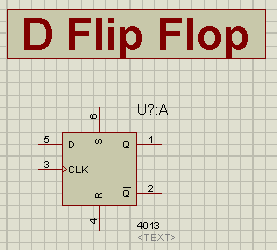 The S and R are the additional pins to use it for the higher level Experiments. Yet for the simplicity and core information, we’ll use Logic Gates when we’ll perform in the practical section.

In the working of D type Flip Flop, we observe that the D is the only input of the D Flip Flop. yet, the Clock also has the effect in the output of the circuit. Due to the Latched Circuit of Flip Flops, all this discussion would be pointless if we took the concept in the mind that at every pulse, the data of the Flip Flop is changed. Truss, we use an Enabler or Clock in the Circuit through which we can separate the circuit from the input at the instance of our will.

When clock is HIGH:

When Clock is LOW:

During the operation when the Clock or Enable input is LOW, any value at the D does not have any effect on the circuit’s output. This position is called the “Don’t Care” State of D Flip Flop.

For the purpose of best understanding, we are going to check these concepts and the circuit information in the simulation Software. We are using the Proteus ISIS here.

To perform the experiment in the software, just follow the simple steps given next.

In real life, the Clock is used in the place of Logic Gate (as shown in the image above) because it automatically changes the direction and change the output of the D Flip Flop.

NOTE: You can also use the Logic Probe instead of the Grounded LED.

Truss, in this session, we saw what are the D Flip Flops, how does they work, how an we design the Truth Table of D Flip Flop and how can we perform it practically in Proteus ISIS.

In the next session, we’ll know what are T Flip Flop and how is its Simulation in Proteus ISIS.