NOR as Universal Gate in Proteus ISIS 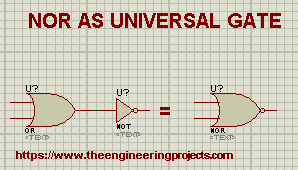 Hi Mentees! I hope you are having a Productive Day. We are here with a new piece of Information. In today’s tutorial, we will haev a look at NOR Gate with Truth Table in Proteus ISIS. In this tutorial, we’ll learn the following concepts:

As the name implies, a NOR gate is a combinational Gate and we introduce it as:

“NOR gate is the OR Gate followed by the NOT Gate and it give the output HIGH only when both the inputs are LOW.”

OR Gate has minimum two inputs and only one output. Assume that A and B are the inputs of NOR Gate then the Output Y is denoted by a plus sign between inputs and a collective bar or complement sign on the statement as:

Graphically, when we show a NOR Gate, we make a bubble at the start of output of OR Gate. This bubble shows the inversion of the OR gate.

We can use both the graphical symbols while using the NOR Gate but usually, we prefer the right symbol as it is less complicated and more demonstrative.

Truth Table and Timing diagram of NOR Gate

In the world of Logic Circuits, we often use a term truth table. A Truth Table is tabular representation of a gate and we use the following statement to define Truth Table:

Hence the Truth table of NOR Gate contain its inputs as well as the output and it looks as following :

While working with the Logic Gates, we should always have an idea about it timing diagram.

A timing diagram is a tool that is usually important in digital electronics, digital Communication , hardware debugging etc.

The timing diagram of NOR Gate is as follow:

NOR as Universal Gate

Recall that Universal Gates are the one that have the characteristic to be used as other types of gates when designed specifically.

There are two Universal Gates NAND Gate and NOR Gate.

We call the NOR Gate as Universal Gate because we can design the other Logic Gates using the NOR Gate. NOR Gate can be used as:

We’ll prove our this explanation with the help of Proteus ISIS one after the other.

NOR as Universal Gate in Proteus ISIS

While Designing the circuits, we need the following Components:

While designing a NOT Gate through NOR Gate we must follow the statement:

“We get a inverse of the Input A, when we OR the input with it self and take the Compliments of it.”

Hence we found the Truth Table as:

During the formation of OR Gate through NOR Gate, we have to keep in mind the following statement:

“The output of NORed inputs is also the ORed input.”

We denote this Statement as:

Change the Values of Logic toggles according to the truth table. 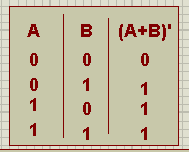 Notice that in the formation of current Gate, we implemented the NOT Gate, derived from the NOR Gate that we made before this.

The core statement of the formation of AND Gate through NOR is given next:

“The NORed output of Complements of the input is AND Gate.” 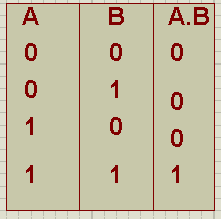 Truss, Today we learnt about the core concepts about the NOR Gate. we saw why we call it as universal Gate and also we saw the Practical experiments to prove our discussion.