Hello Learners! welcome from the team of The Engineering Projects. We hope you are having a productive day. We are working on a series of Blogs based upon the core knowledge about Digital Logic Gates and Circuits. In this tutorial, we’ll know about the SR Flip Flops and after brief introduction we will simulate SR Flip Flops in Proteus. Let’s have a glimpse on the topics of today:

Flip Flops are extremely important Circuits of Digital Logic Design. We Introduce the Flip Flops as:

“Flip Flops are type of sequential Logic Circuit that contain two stable states “Zero” and “One” (because of the binary system). It is often used as Storage device and each state of Flip Flop stores one bit.”

They are the building blocks of the Electronics and play an important role in the world of Logic Circuits. Being the Binary circuits, they are essential for the computation in the computer system.

the Flips Flop are sequential Logic Circuits that mean they use a Clock called as “CLK”  in the circuit. the Function of clock is to synchronize the circuit. The Phenomenon in which the clock signal is change its value i.e, from 0 to 1 or from 1 to 0, is called the edge of the clock.

Flip Flops are also called as Bipolar Multi-vibrator because they can store the both the Conditions of the Binary system.

When we say that Flip Flops are the Storage Devices, we mean that they does not only calculate the output from the present data, but they can also work with the data stored previously in the Flip Flops.

These kinds are same in the composition of circuits, but the working, Construction and the results are different from each other.

We’ll Describe the structure of each of them along with the simulation for best concepts one after the other.

Flip Flops can maintain a binary state as long as there is power in the circuit, therefore can store the Data.

The full name of SR Flip Flop is Set Reset Flip Flop. In this type of Flip Flop the Value of Output Q depends upon the Value of the “S” input. once the input of the SR Flip Flop goes high (When S and R are high) the output goes to infinity or undefined therefore this Circuit is used to  store the information.

When we talk about the Truth Table of SR Latch, we find some unique behavior. The Interesting point about the SR Latch is when Set and Reset are LOW i.e, 0 then the value of the Output does not change. The circuit does not show any alternation. Moreover, when the values of inputs are HIGH, the output is undefined as discussed above. Hence the design of Truth Table of SR Flip Flop is as follow:

we’ll learn about their details and the structure of the circuit.

The Active High SR Flip Flops are the one in which the Set input and the output terminal Q collaborate with each other. When the S is 0, the output Q is 1 and vise versa.

We know that Q is always opposite to Q’ hence we get the output as expected. Let’s Look at the circuit of Active High SR Flip Flop and work at it in Proteus ISIS. 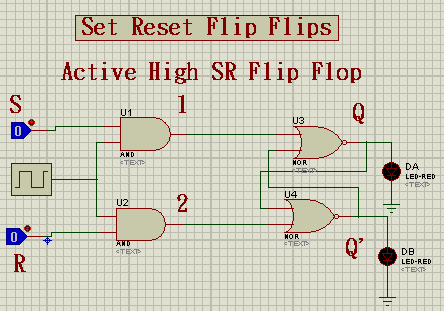 Alter the Values of Input and observe all the outputs at each Logic Gate. You will get following Truth Table:

The inputs of Active Low SR Flip Flops are denoted by a a bar , a complement or a “not” word along with their name.

The Active Low SR Flip Flops have the same output as their twin Circuit Active High SR Flip Flop. The difference is in the construction of the circuit.

We use the NAND Gate in the Construction of Active Low SR Flip Flop. all other arrangements and devices are same as the previous one. 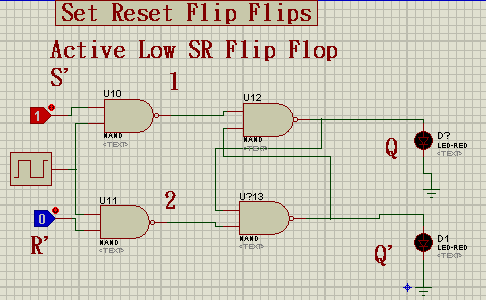 When we Test the Active Low SR Flip Flop we get the following outputs:

Hence this is another form of SR Flip Flop.

Consequently, we learned about the Flip Flops, we saw what are its types , saw the subclasses of the Flip Flop and designed two types of SR Flip Flops in Proteus ISIS.

Stay tuned for the other tutorial in which we’ll solve the problem of undefined conditions of Flip Flops.