Hello mentees! Welcome on the behalf of The Engineering Projects. We are here with a new lesson about the Digital Logic Circuits. Logic Circuits work as heart in many electronic Circuits. The topic of today is Full Subtractor in Proteus and you will find the answers of the following questions:

You will also learn some important chunks of information in the DID YOU KNOW sections.

A full Subtractor works really well in the processor. We’ll talk about it function but before that have a look at its definition:

There is another circuit called Half Subtractor that is used for the subtraction of bits but the foremost disadvantage of that circuit was its inability to work with the borrow taken in the previous calculation and the designers worked for another better Subtractors.

If you know about the Concept of binary subtraction, you can use your knowledge to generate a Truth Table of 2 bit  Full Subtractor so that one can design a feasible Circuit of 2 bit Full Subtractor. The Table contain all the records that can be possible for our experiment and its result into the bargain. Thus the Truth Table for the Full Subtractor is shows as:

When we observe the Circuit of 2 bit Full Subtractor, we found that it is combination of two circuits of Half subtractors and the output of each circuit is then fed into an OR Gate through which we get the output of borrow. We have two types of outputs in the 2 bit  Full Subtractor:

The Full Subtractor is the one of the most fundamental Logic circuits of that are used for two bit subtraction in many computing system.

Let’s have a look at the procedure of calculation of both.

The binary subtraction is similar to the decimal subtraction but it works with only two digits called 0 and 1 instead of 1 to 10 in the decimal. When we examine the answer of the bit difference while using a Truth Table in the Half Subtractor circuit, we found that it is identical to the XOR Gate. Therefore we use a XOR Gate for the Difference that is introduced as:

The type of Logic Circuit that gives the output HIGH only when both its inputs have inverse value to each other and vise versa.

Thus the truth table for the XOR Gate is given as:

The output of the XOR Gate is Fed into another XOR Gate for the Full subtraction which has the connection of a Borrow Input B(in) at its Second input.

The Application of the  Full Subtractor is found in the ALU of computer where they are responsible for the Graphic application to decrease the difficulty in the CPU and GPU.

Many times, the situation arrives when the Minuend<Subtrahend and in this way, the circuit need to borrow a bit from the bit presented just after it. The Full Subtractor do this through the AND Gate that contain a NOT Gate at its one end. For full Subtractor, this arrangement is again fed into the duplicated circuit and the both the outputs of this AND Gate is fed into the OR Gate that gives us the Borrow(out). 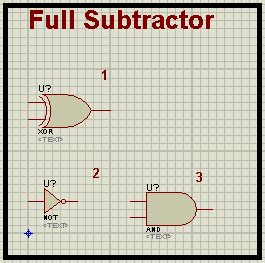 In the next session, we’ll learn how can we simulate a four bit Full Subtractor in Proteus ISIS and its basic concepts.