Hi mentees, we are here with a new tutorial. Today , we’ll observe the Latches. Latches are used often in the digital circuits and are important as well as simple in their construction. Latches are made with NAND gate in a very specialized form.

The two inputs of Latches are called “S” and “R” where S stands for SET and R stands for RESET. Due to inputs , latches can have four unique combinations of the input. The output is denoted as “Q” and is totally dependent on the input Combination.

Nevertheless, another Output is also used in the circuit sometimes. this output is denoted as Q’ and is read as Q bar, Complement of Q or bar Q  NOT Q because it is also written as

One can have an idea that this output is the invert result of “Q” output and depends on the Q and successively to the inputs S and R.

Two types of circuits are possible in latches:

Active high circuits: In this kind of the Circuit the inputs are grounded and therefore are LOW. Latch are triggered momentary high signal.

Active Low Circuits: In this kind the inputs are LOW and the latches are triggered at high signals. 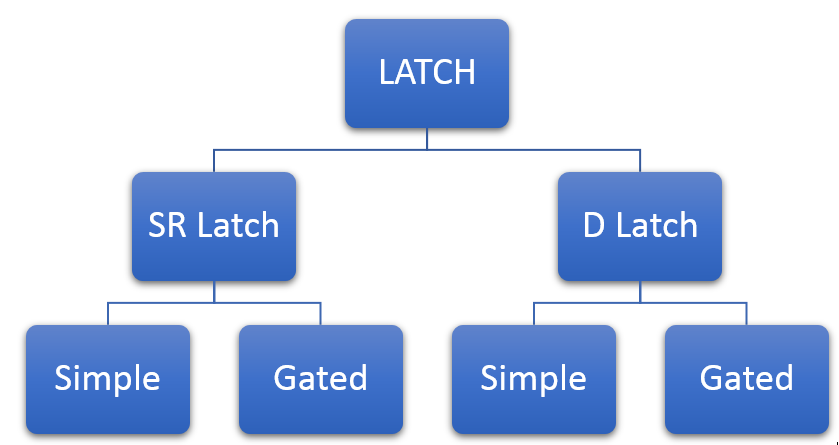 whereas, 1st two types are further subdivided into two categories:

All of theses types along with the implementations are shown in figure on right side.

Implementation of Latches in Proteus ISIS

For best understanding, we’ll design each of the type and create the truth table.

All the Circuits follow almost same procedure. Even so, they are different in the Construction and the characteristics.

NOTE: You can also make this Circuit with NAND Gate.

The SR latch ( SET/RESET) mainly change according to the change in the S line. that means, whenever the S is HIGH the Q ( output) is shown as HIGH and vise versa.  but when both the inputs (SET & RESET)  are HIGH then we seen that both the outputs are LOW. Q ( output ) is alway the inverse of Q’.

Once we check all the Conditions we can assemble our own truth table. I have made a truth table that shows us the following result:

The SR latch are not Complete, hence the performance can be enhanced by the a process called “Gating” , and the resultant circuit is called Gated SR Circuit.

The Circuit of Gated SR is shown next:

D latch is a modification of the Gated SK Latch.

Accordingly to the Picture, the D  and clock are now the inputs of the Circuit and we can notice the output at Q and Q’.

This is another type of D Latch.

Let’s have a look on the Circuit of Gated D Latch:

when we change the D and test all the Condition, the resultant truth table is:

Hence today we learnt about the latches, some basic concepts and its types along with  practical implementation.