NAND as Universal Gate in Proteus 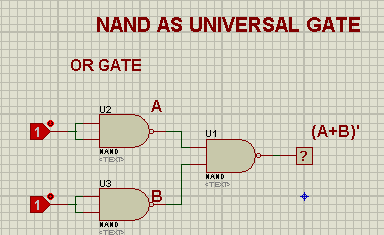 Hello Learners! Welcome to The Engineering Projects. We are here with a new tutorial. Before this, we learnt about Basic Logic Gates and Truth Tables in Proteus. In previous tutorial, we have had a look at NOR as Universal Gate in Proteus ISIS. Today,  We’ll perceive about another Logic Gate derived from the Basic Gates.

Recall that Logic Gates are the pillars of Digital Logic Circuits. Therefore, it is useful to recognize the fundamental knowledge about Logic Gates.

Today, we’ll seek the answers of the following Questions:

Hence, Lets find out all the answers.

As the name implies, NAND gate is the Combination of two Basic Gates i.e AND Gate and NOT Gate. We describe the NAND gate as:

“The Universal Gate that is the Combination of both AND Gate and NOT Gate is called the NAND Gate that gives the LOW output only when both its Input are HIGH.”

The output of the NAND Gate is the inverting result of the AND Gate.

Assume that A and B are two inputs f the NAND Gate, then the Output Y is denoted by a dot between the inputs along with a combine compliment or a bar on the whole statement.

For graphical Representation of NAND Gate, we denote the NAND Gate with a small bubble at the end of AND Gate. This Bubble is called the Negation Indicator.

If we look at the truth table, it is the inverse of AND gate.

The inversion is due to the NOT Gate’s ability in the NAND gate.

At the same token, when we observe the timing diagram of NAND gate, we get an image given next:

In Logic Circuits, we often use a term called “Universal gates”. this can be defined as:

“The category of Logic Gates, through which we can derive all the Basic Gates are called universal Gates.“

We have two Universal Gates, NAND Gate and NOR Gate. These have importance in the world of Digital Logic Designs because of their simplicity and usefulness.

NAND as a Universal Gate

As discussed before, NAND Gate is a Universal Gate. It is because, when we design carefully the circuit of NAND Gate through some Combinations, we can use the NAND gate to obtain the output as the Basic Logic Gate, Truss , with this single Gate, we can get the output of :

We’ll Explain this procedure just after this section. Let’s Prove the discussion by the mean of Practical Implementation.

We can Implement the universal Gates to make the all Basic Gates named as:

AND Gate, OR Gate and NOT Gate.

This will be done in the Proteus ISIS and we’ll describe each of them one after the other.

Take the discussed elements from the pick library One after the other through “P” button.

Follow the instructions to make all the Gates one by one.

While Designing the OR Gate through NOR Gate, we must have the knowledge about one rule of Digital Logic Design that says:

“The Compliment of the ANDed input is equal to the ORed inputs.”

Change the value of inputs one by one and record the output in the form of table. 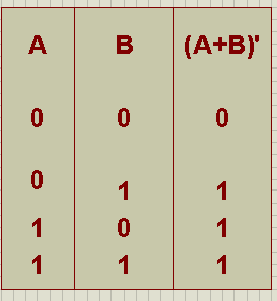 We’ll Design AND Gate through NAND Gate on the basis of the following rule of logic Design:

The formation of NOT Gate through NAND Gate is based upon the rule:

“The Compliment ANDed input with itself is equal to the complement of input.”

The resultant Truth Table is:

NOTE: You can Gain the same output by following the rule (A.1)’=A’

Consequently, we recognized the Core detail of NAND gate, we learnt what are the universal gate and how can we make different gates with NAND gate using Proteus simulation. moreover, we got some of the advantages, disadvantage and   some real life applications of NAND Gate.