You are here:
Arduino

Hi Guys! Hope you’re well today. Happy to see you around. In this post today, I’ll walk you through the Introduction to Arduino Nano 33 IoT.

Arduino Nano 33 IoT is mainly used in basic IoT applications. The Internet of things is one of the most exciting and robust developments in the field of information technology.

Using this technology you can interface a network of physical things with software, sensors, or other technologies to develop communication and data exchange between devices and other systems using the internet.

For example, you can control the room temperature by interfacing the sensors in your rooms with your smartphone through WiFi. Traditional systems including control systems, wireless sensor networks, embedded systems, and home automation all contribute to activating the internet of things.

Over the past two decades, networking technologies have been commonly restricted to traditional devices like desktop computers, laptops, and more recently tablets and smartphones. With the inception of innovative technologies, IoT continues to cover scores of devices into the network including medical devices, household appliances, vehicles, electric motors, traffic controls, street lights, smart TVs, and much more.

At Arduino, you can either generate your own Arduino Access Point or connect the board with any existing WiFi network.

I suggest you buckle up, as I’ll detail the Complete Introduction to Arduino Nano 33 IoT covering pinout, pin description, features, programming, and applications. 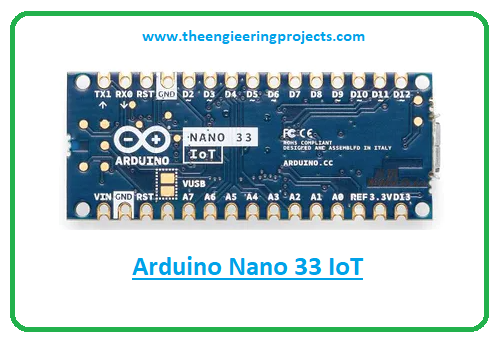 The board contains two LEDs i.e. one is a built-in LED connected to pin 13 of the board and the other is the power LED that turns on when power is supplied to the board.

This is the little introduction to Nano 33. In this section, we will detail the pin description of each pin incorporated on the board.

The Nano 33 board contains 14 digital pins that you can use as input or output depending on the requirement. These pins receive only two values HIGH or LOW. When pins receive 0V they are in a LOW state when they receive 5V they remain in the HIGH state.

This board carries 8 analog pins. These pins can receive any value in contrast to digital pins that receive only two values i.e. HIGH or LOW.

The Nano 33 board features 11 PWM pins. These pins, when activated, generate analog results with digital means.

The Nano 33 contains the I2C two-wire communication protocol. It carries two pins SDA and SDL. The SDA is a serial data pin used to carry the data while SCL is a serial clock line used to synchronize all data transfer over the I2C bus.

The I2C protocol is used to develop communication between two or more integrated circuits.

This board supports UART serial communication protocol with two pins Tx and Rx. The Tx pin is a transmission pin used to transmit serial data while Rx is a receiving pin mainly employed to receive the serial data.

Arduino.cc has introduced an official software Arduino IDE to program all boards of the Arduino Family. The C and C++ languages are used in this software to program the Arduino boards.

The Nano 33 incorporates a USB port through which you can connect the board with the computer using a USB cable. You can send several instructions to the board and control and program the board as you like better.

Plus, the Arduino board includes a Bootloader that is mainly used to burn the program inside the controller, setting you free from buying the separate burner to burn the Arduino program.

Arduino MKR WiFi 1000 – it is only employed for Wi-Fi applications as it comes with a different chipset than Arduino Nano 33 IoT.

Arduino Uno Wifi Rev 2 – it is an educational version of the MKR WiFi 1010, incorporated with an embedded accelerometer and USB-B connector.

Arduino MKR Wifi 1010 – It is an advanced version of Nano 33 that features a battery charger but lacks an accelerometer.

This board is widely used in IoT applications. You can connect this board with an existing WiFi system and control physical things like vehicles, electric motors, medical devices, street lights… over the internet.

That’s all for today. I hope you’ve enjoyed reading this article. If you have any questions, you can approach me in the section below. I’d love to help you the best way I can. Feel free to share your valuable suggestions and feedback around the content we share, so we keep producing quality content based on your needs and requirements. Thank you for reading the article.