Hey Fellas! I am back to give you a daily dose of useful information. Today, I’ll uncover the details on the Introduction to Arduino Due. It is a microcontroller board based on Atmel SAM3X8E, 32-Bit ARM microcontroller. It is developed by Arcuino.cc with the intention to provide an easy pathway for the beginners to get a hands-on experience with the module without any prior technical knowledge. You can just plug the device into the computer through a USB cable and start playing with it right away.

Arduino Modules are a step ahead of a single microcontroller. If your project is mainly based on a microcontroller, you need to buy external peripherals and connect them with the controller in order to lay out an automation into your project. Arduino Boards has made things easy more than ever before. Although, more or less, they are known are microcontrollers, they have a leg over them because of built-in peripherals and an ability to perform a number of functions on a single chip. Also, no external burner is required for Arduino, as it comes with a built-in burner. You just have to write and compile the required code into the Arduino Software and burn in the module through a single click on the computer.

In this post, I’ll cover each and everything related to Arduino Due i.e. its main features, pinout, pin description, compilers used and applications. Let’s get down to the nitty-gritty of this tiny module and explore everything you need to know.

Introduction to Arduino Due

You have got a brief overview of the device. I have compiled the main features of this device at one place.

Following table shows the main features of Arduino Due.

Now, you have got a hold of the main features of this module. In this section, I’ll highlight the pinout of the chip.

Following figure shows the pinout of Arduino Due.

The function associated with each pin will help you understand the purpose of each pin in the relevant project they can be used for.

Following table shows the description of each pin.

You have got clear about the functions associated with each pin. Now, I’ll highlight the functions of each pin with images, making it easy for you to look at the information without much hassle.

Arduino Due comes with four ports named PORTA, PORTB, PORTC, and PORTD. There are 54 digitals I/O pins. The pins with PINK color on the pinout mention above are used as digital I/O pins.

There are 12 analog pins on the board. They are a part of PORTA and PORTB and appear on the board as follow.

There are two USB ports available on the board where one is programming USB port and other is native USB port. Both ports can be used for programming purpose, however, the native port also acts as a USB host for connected peripherals like keyboards and smartphones.

There is one power jack on the board for powering up the device.

There are two TWI (Two Wire Interface) modules incorporated on the board, also known as the I2C protocol, and are used to establish the communication between low-speed devices like ADC and DAC converters and microcontrollers. It is a two wire communication and comes with two lines: Serial Clock (SCL) and Serial Data (SDA). The former is a clock signal that is used to synchronize the data transfer between the devices while the later is used to hold the desired data.

Out of 54 digital pins, 12 are used for PWM output. They appear on the board as follow.

JTAG header is a remarkable addition in the board that most of the board lack in the Arduino Community. It is a common hardware interface that sets a pathway to communicate directly with external chips on a board. It was introduced by the Joint (European) Test Access Group with the intention of testing the physical connections between pins on a chip. It comes with fours pins known as TCK, TMS, TDI, and TDO. This header incorporates on the board as follows. 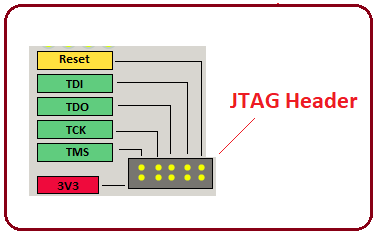 There is one reset and one erase button is added on the device. Former is used to reset the controller while later is used to erase the stored information on the board. They appear on the board as follow.

There are four power sources mentioned as 5V, 3.3V, Vin and Ground. The 3.3V is the operating voltage of each pin while Vin is the input voltage with the recommended voltage range of 7V to 12V. You can power the controller with Vin or 5V. These voltage sources appear on the board as follow.

5. Difference between Arduino Due and Arduino Mega

There is a vital difference between both modules in terms of operating voltage, memory space, number of pins and processing speed. Arduino Due can perform the functions with greater pace as compared to Arduino Mega. More powerful built-in peripherals and more memory space put Arduino Due ahead of Mega.

However, there are some limitations. Arduino Due is not compatible with the 3.3V devices, also, SAM3Xchip provides a complex and intimidating interface that can scare the hell of the person who is practicing this module very first time. It is advised to work with a smaller module like Arduino Uno in the start, and as you get a solid grip on the module, you can move to the complex interface.

Arduino Due is a little bit bulky, covers large space and is used in a wide range of applications where fast processing speed is the end result. Following are the main applications of the board.

That’s all for today. I hope I have given you everything you needed to get started with this module. If you are still living in doubt, you can approach me in the comment section below. I’ll guide you the best way I can. Your feedback and suggestions are the piece of nuggets for us, on which we generate and shape our content – so keep that coming. Thanks for reading the article.