Hello friends, I hope you all are doing great. In today’s tutorial, we are going to design a Proteus Simulation for Automatic Plant Watering System using Arduino. We have designed this project for engineering students as it’s a common semester project, especially in electrical, electronics and mechatronics engineering.

The two most significant hazards to the agriculture industry are the need for extensive labor and a scarcity of water. According to the World Wildlife Fund (WWF) organization, water shortages might affect two-thirds of the world’s population by 2025, putting both the ecosystem and human health at risk. The use of automatic plant watering systems eliminates both of these problems by watering plants at specified times and amounts while monitoring their hydration levels through measuring moisture in the soil surrounding the plants. Automatic plant watering systems can be used in homemade gardens and can also be deployed in fields for large-scale use. Whenever designing an automatic watering system, it is important to keep in mind that the system should be expandable, allowing for the simple integration of new devices in order to broaden the applicability of the system.

We are not designing this project using real components, instead, we are going to design its Proteus simulation. So, first of all, you should Install Proteus Software itself. Proteus software has a big database of electronics components but it doesn’t have modules in it. So, we need to install Proteus Libraries of a few components, so that we could simulate them. So, these are the PRoteus libraries which you should install first, before working on this project:

You can download this complete project i.e. Proteus Simulation & Arduino Code, by clicking the below button:

You should also have a look at these other Proteus Libraries:

Three main components of an autonomous watering system are:

The soil moisture sensor operates in a manner similar to that of the water level sensor. The tip of the sensor is inserted into the soil near the plant, and the sensor is activated. In the case of a moisture sensor, the closeness of the sensor to the plant is also variable, and the user may adjust it depending on the features of the plant for which it is being used. In vast agricultural fields, a single sensor may be used for numerous plants if they are closely spaced and their hydration levels can be determined by measuring the soil moisture at one location that overlaps with another spot on the soil surface.

The RTC module operates on the same concept of time monitoring in the background as other electronic devices such as computers and smartphones; even when these devices appear to be turned off, they continue to keep track of the current time. The RTC module, on the other hand, is capable of exchanging time information with the Arduino board. On a specific day of the week, at a specific time of day, the Arduino is pre-programmed to turn on the water pump and turn off the water pump after a specified length of time. 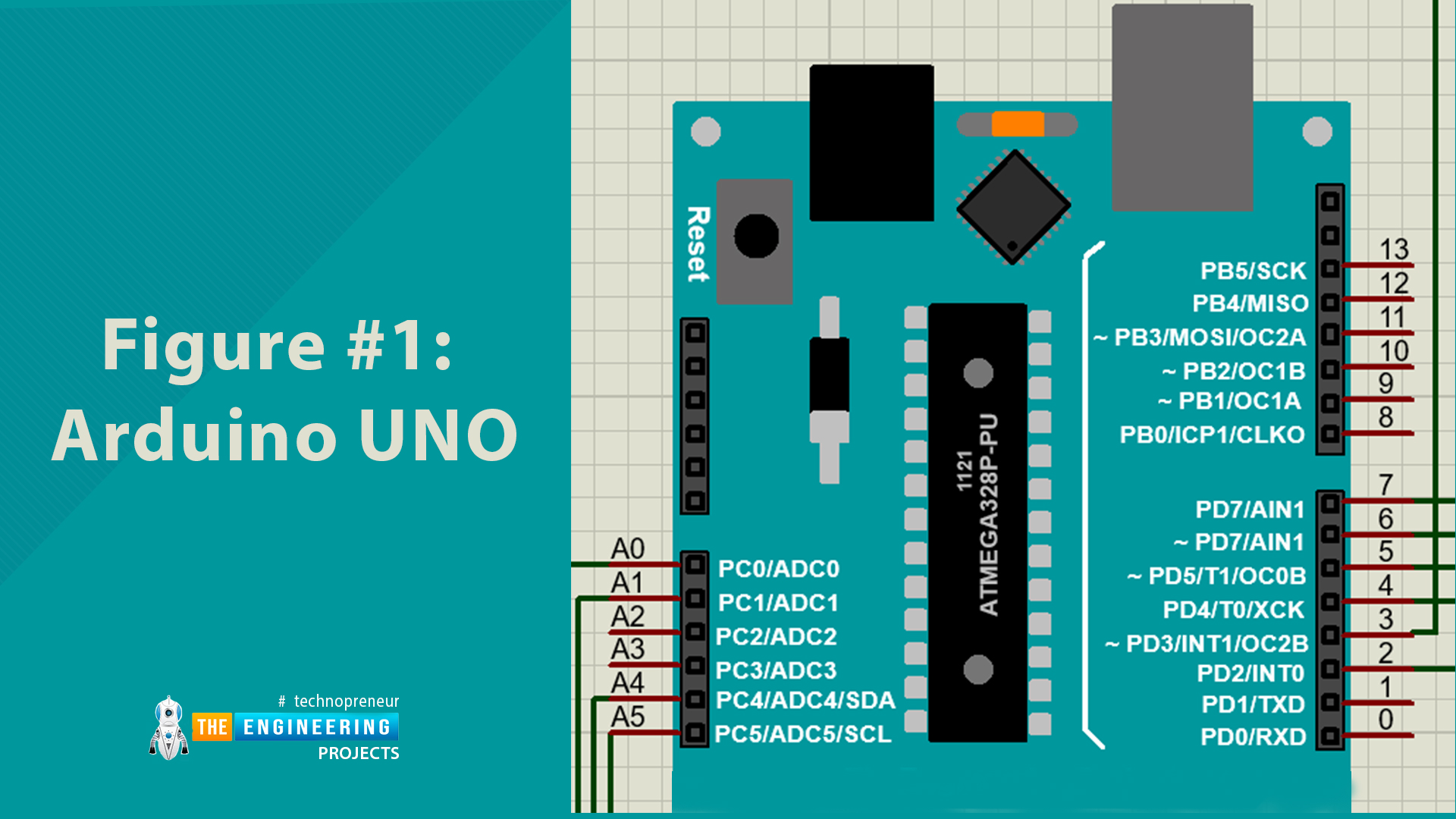 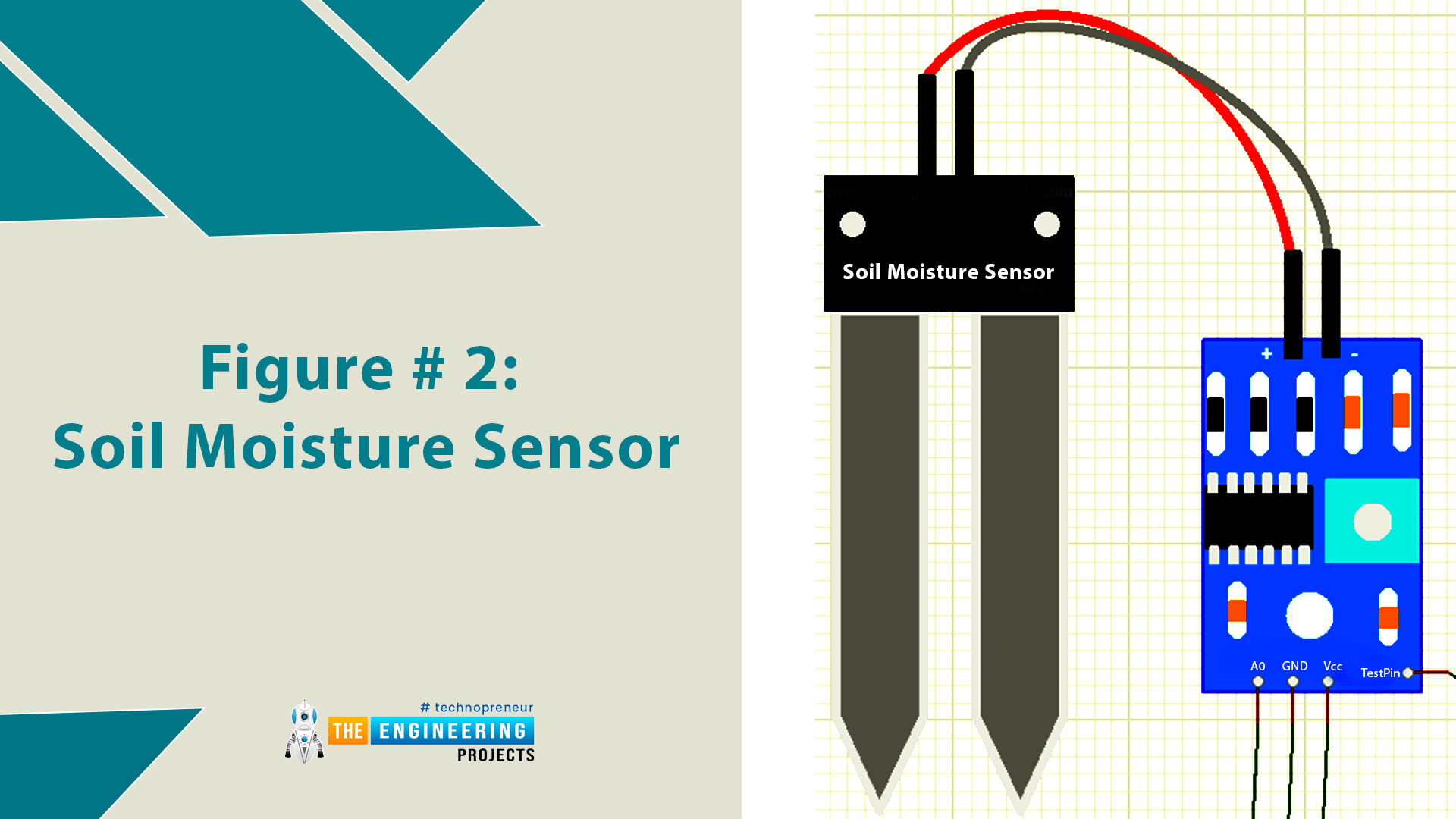 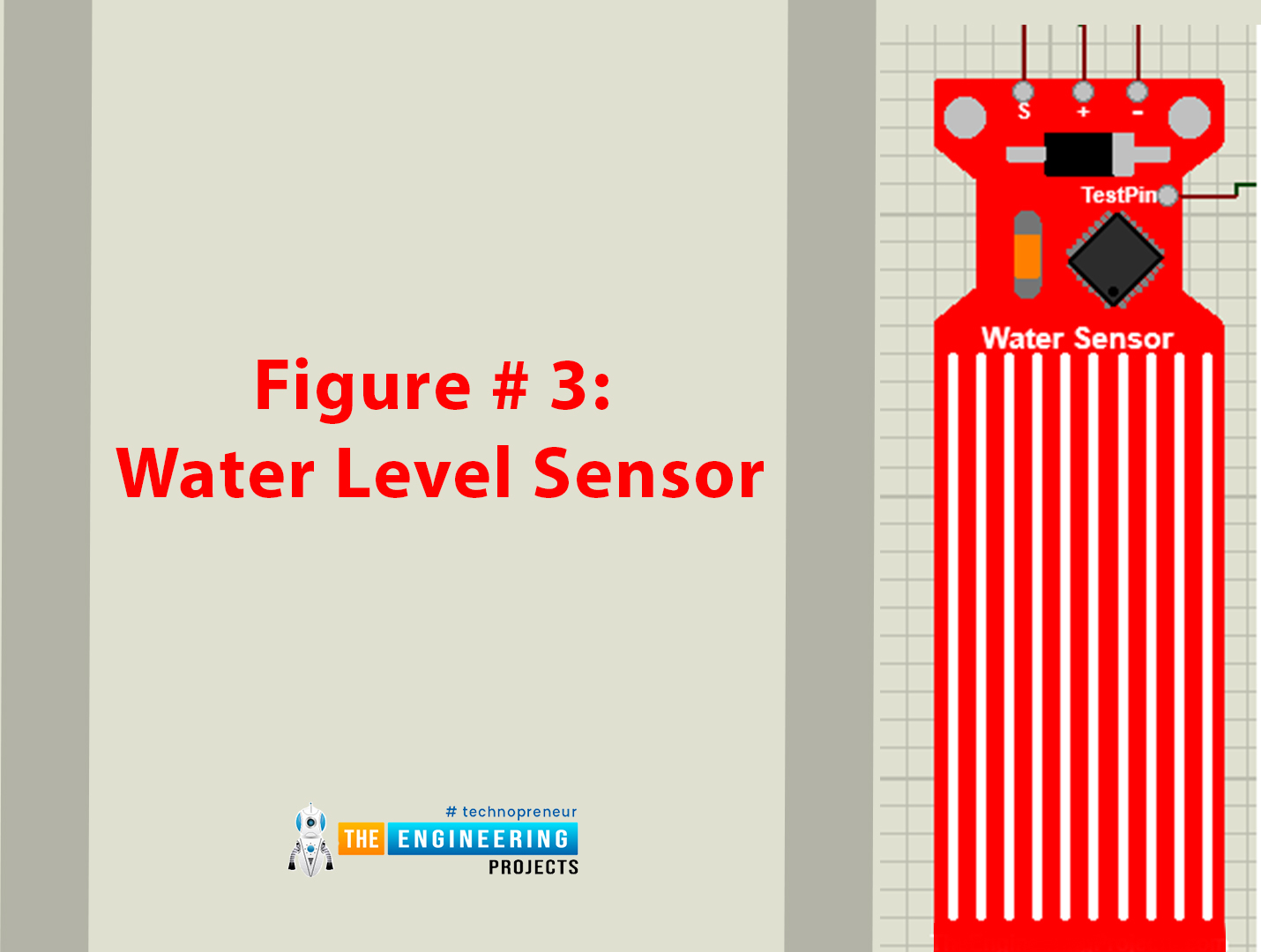 Now, let’s design the Proteus Simulation of Plant Watering System first and then will work on the Arduino Code. 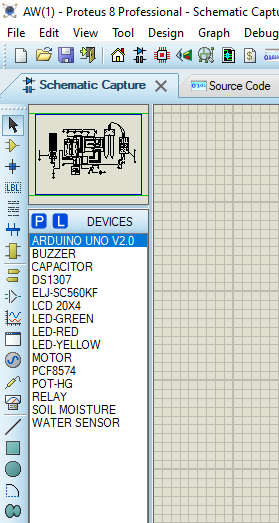 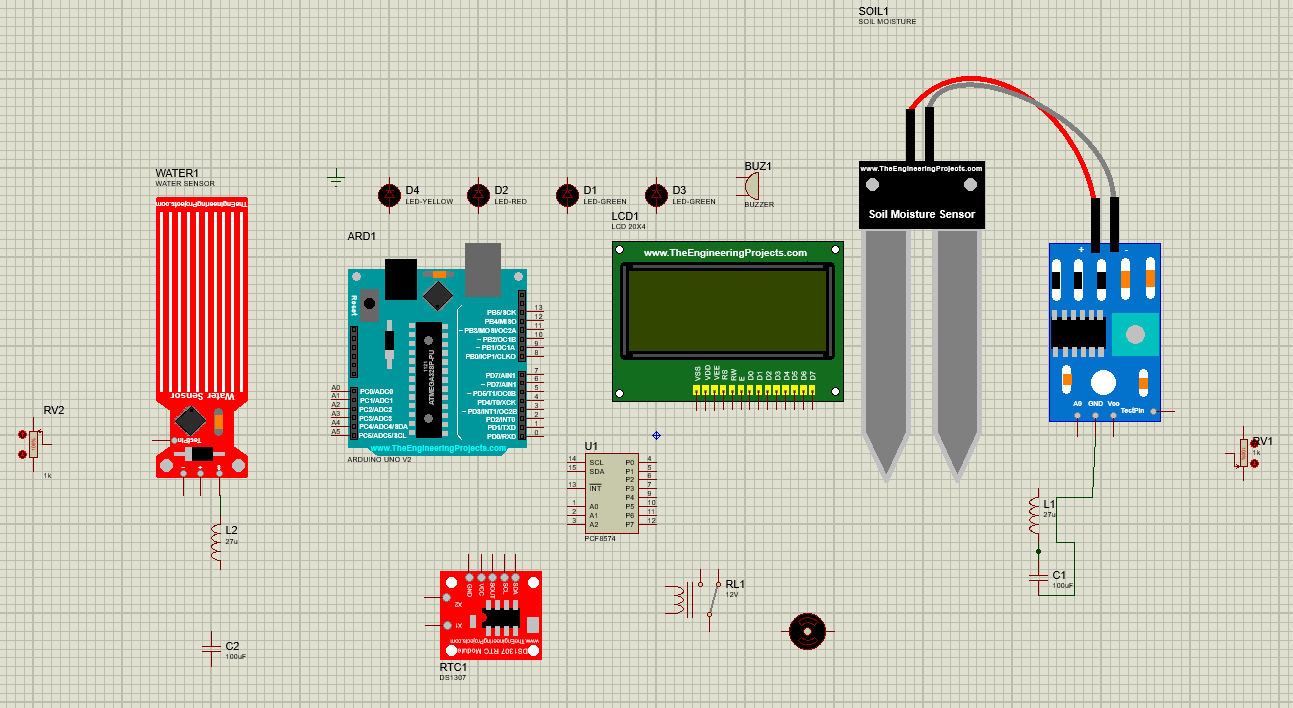 Figure 7 shows the circuit diagram of the system. Proteus was used to simulate the circuit and Arduino App was used for the simulation of the Arduino code. The circuit was designed in a way that is easy to understand and further integrated easily. We will now go through a step-by-step guide on how the circuit was built. 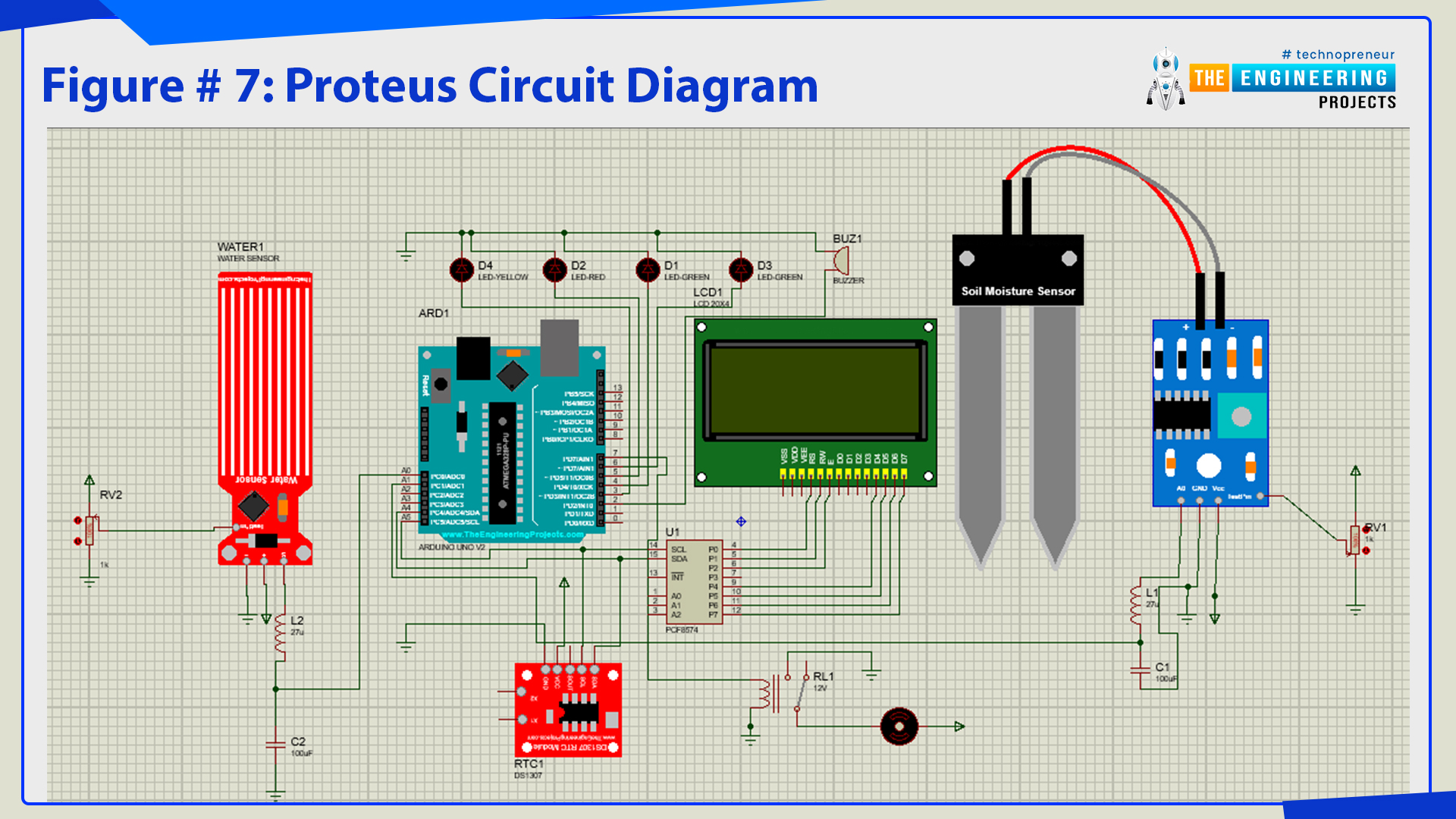 We will look at both of them separately here. 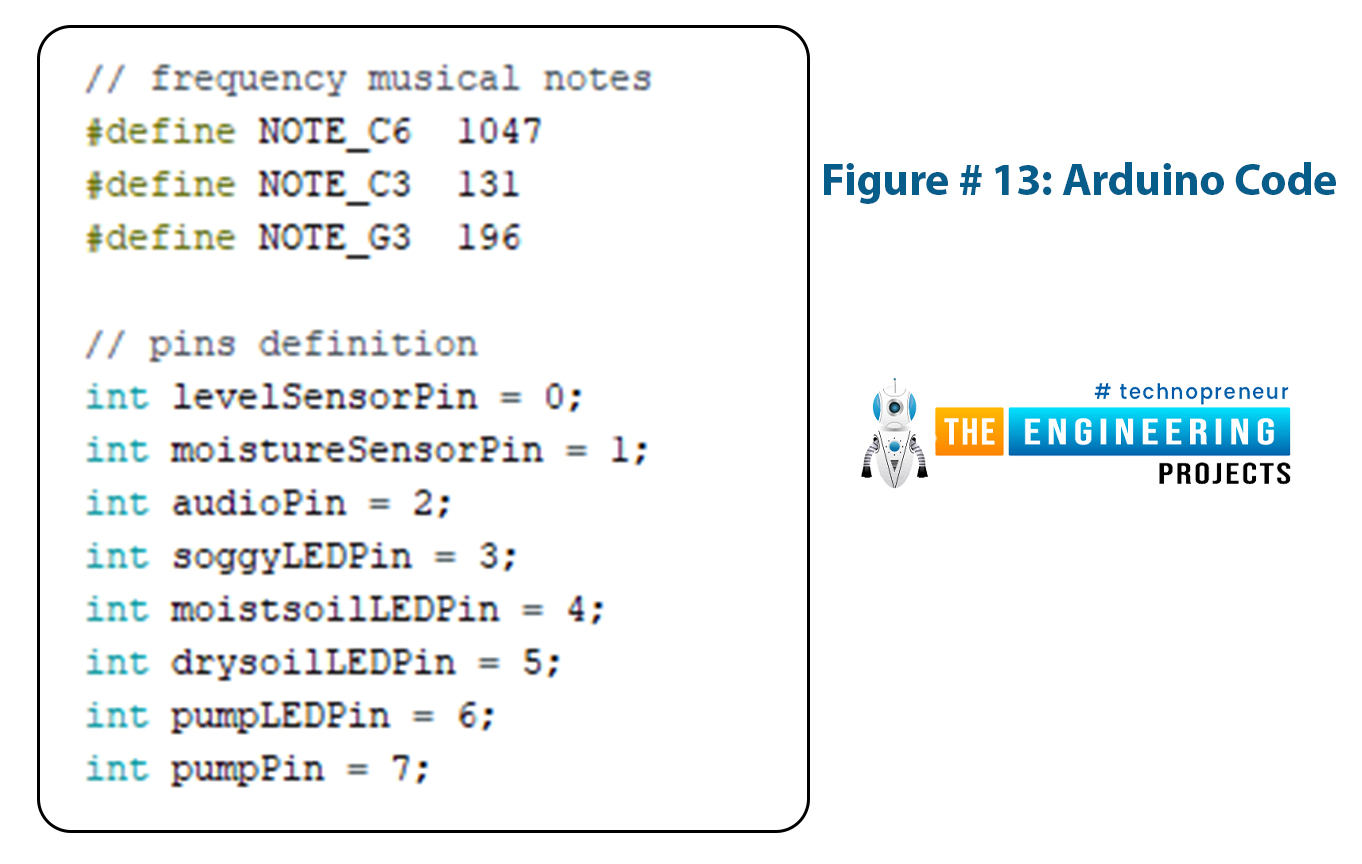 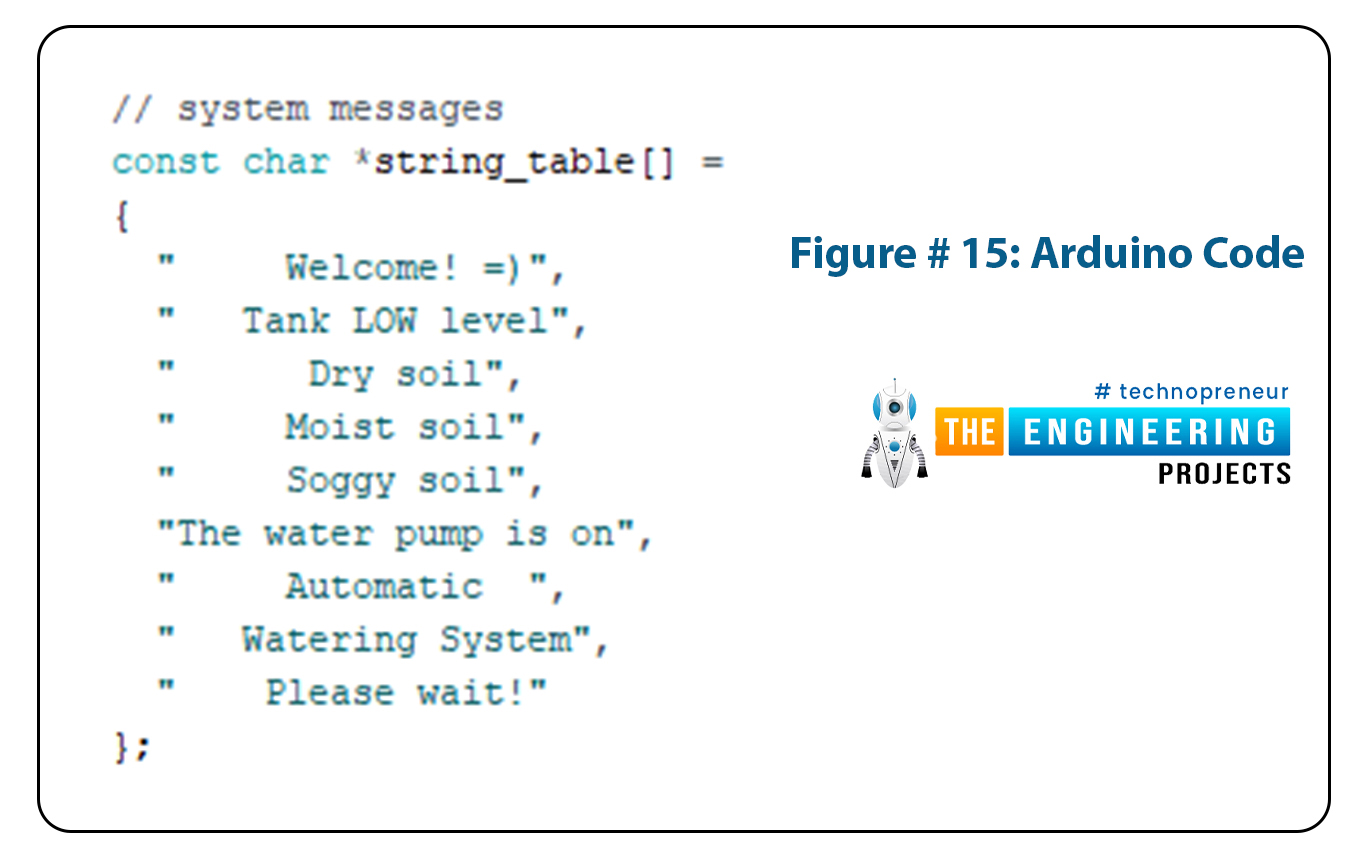 Now we start the programming of void setup. 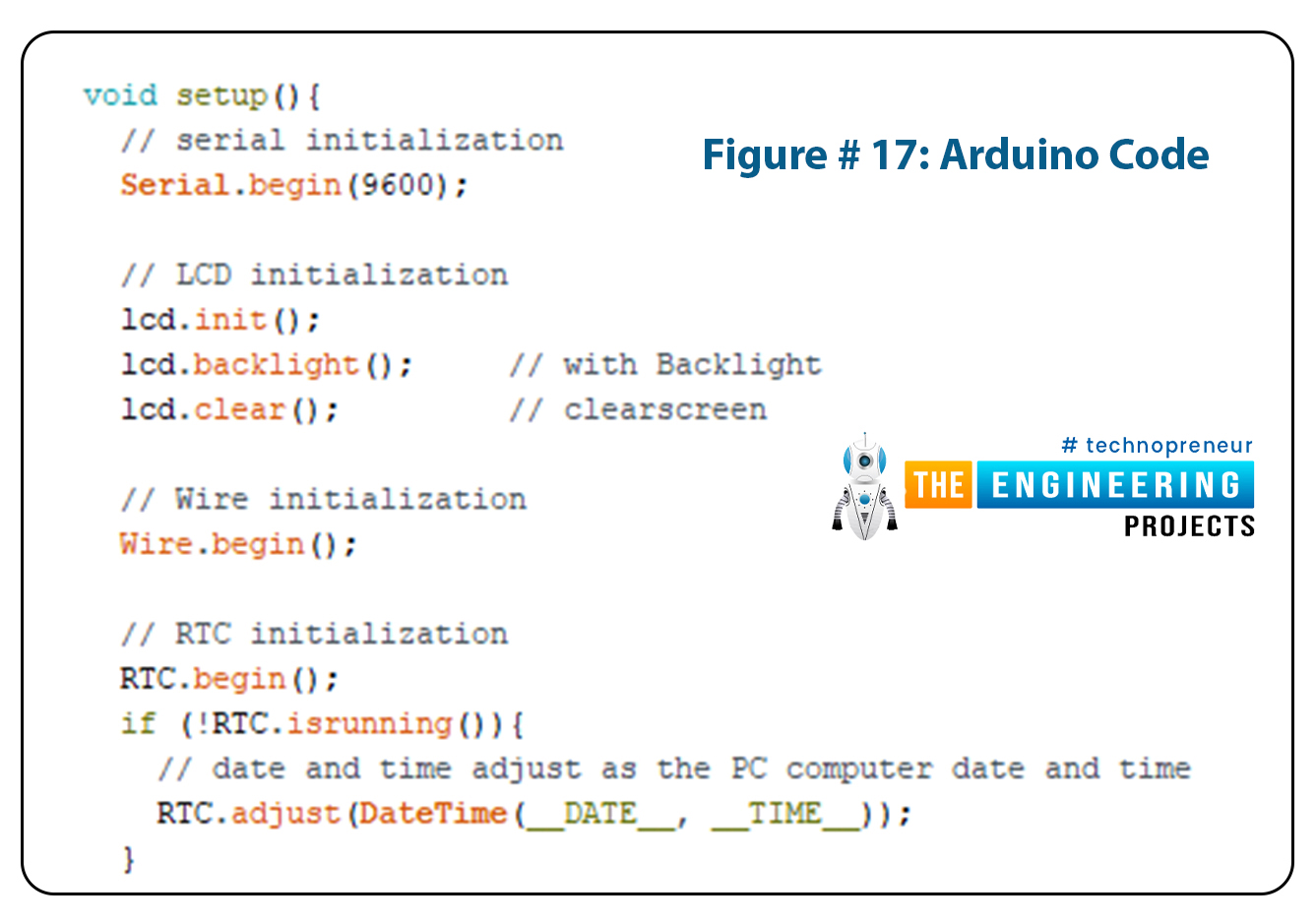 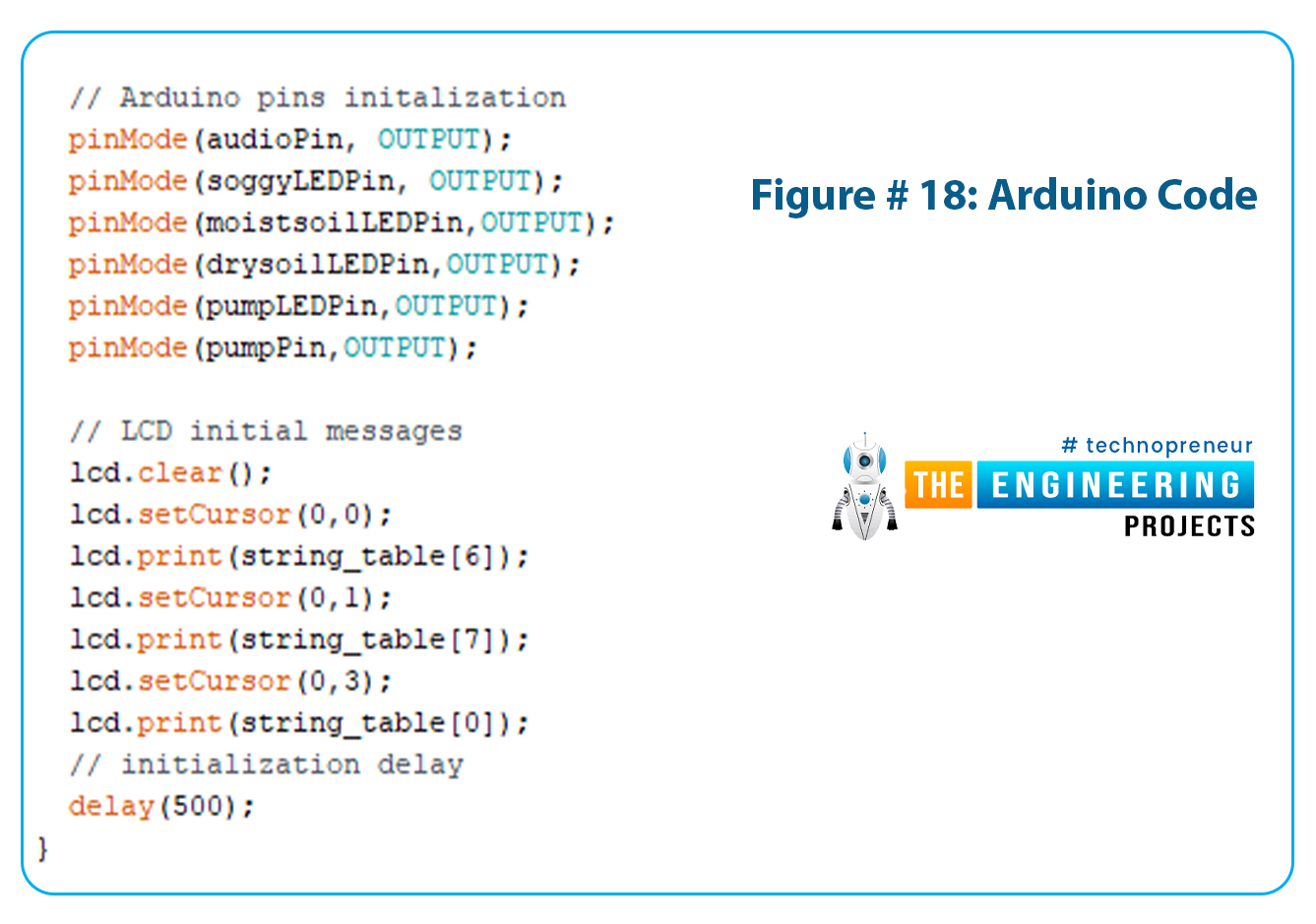 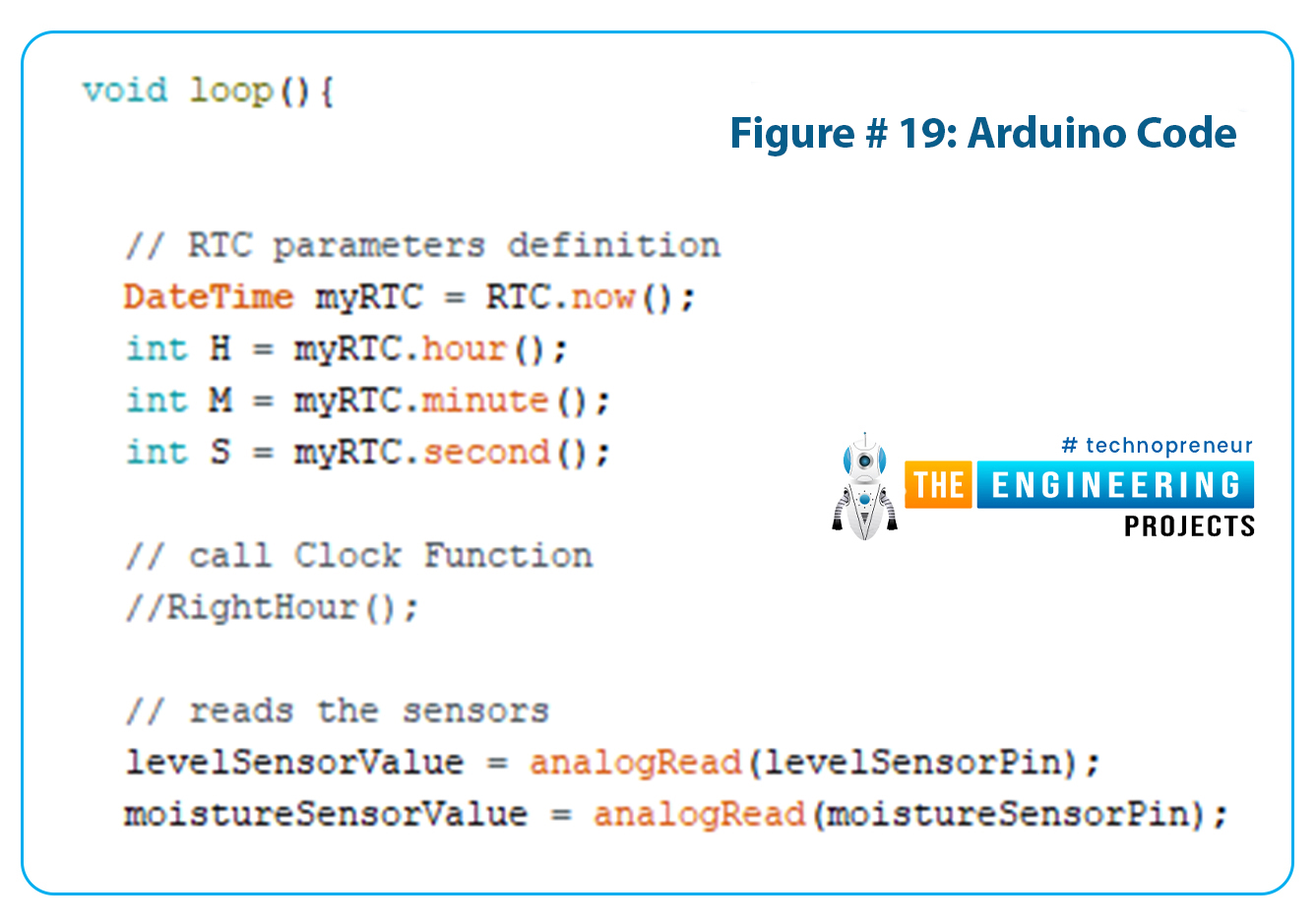 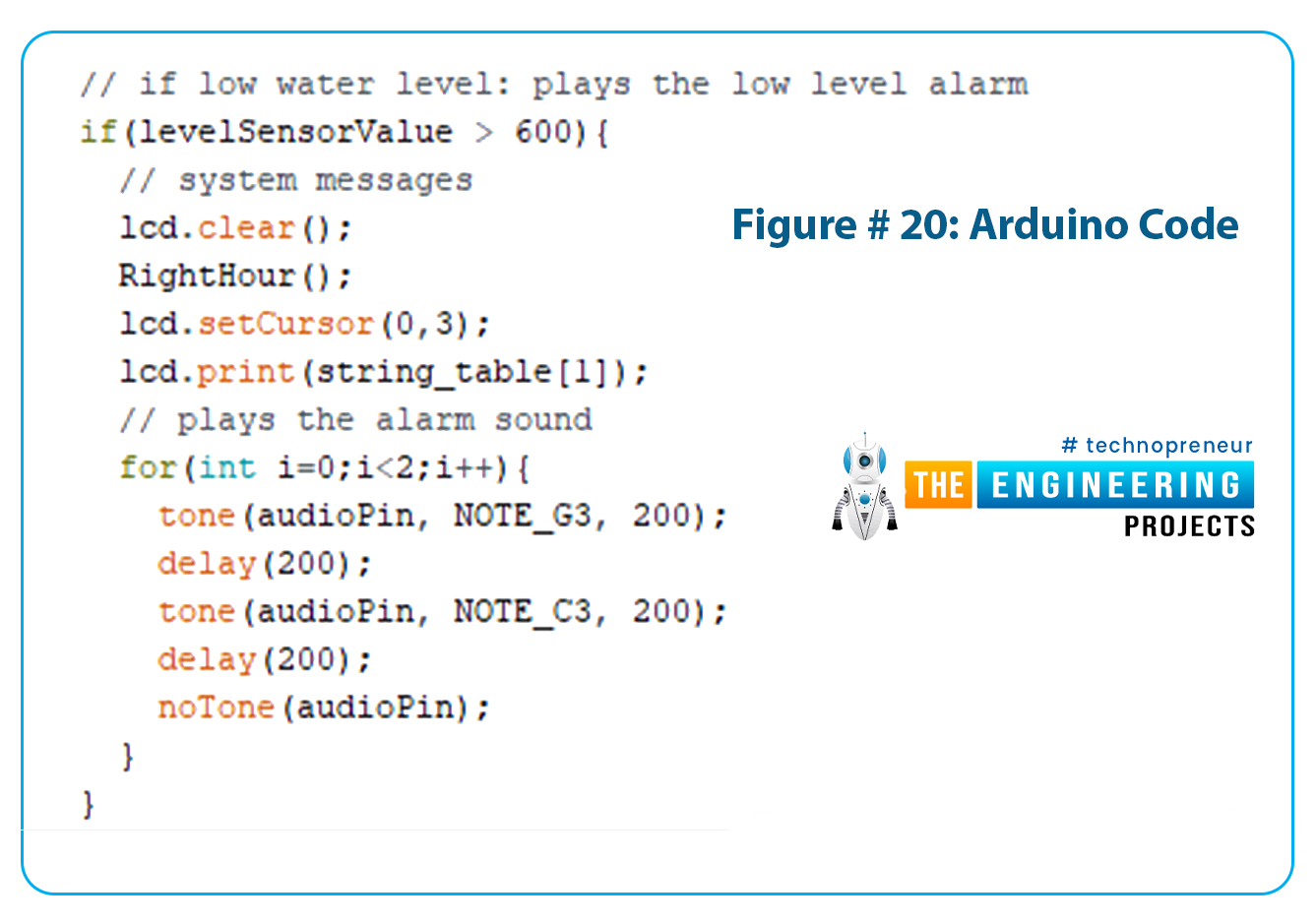 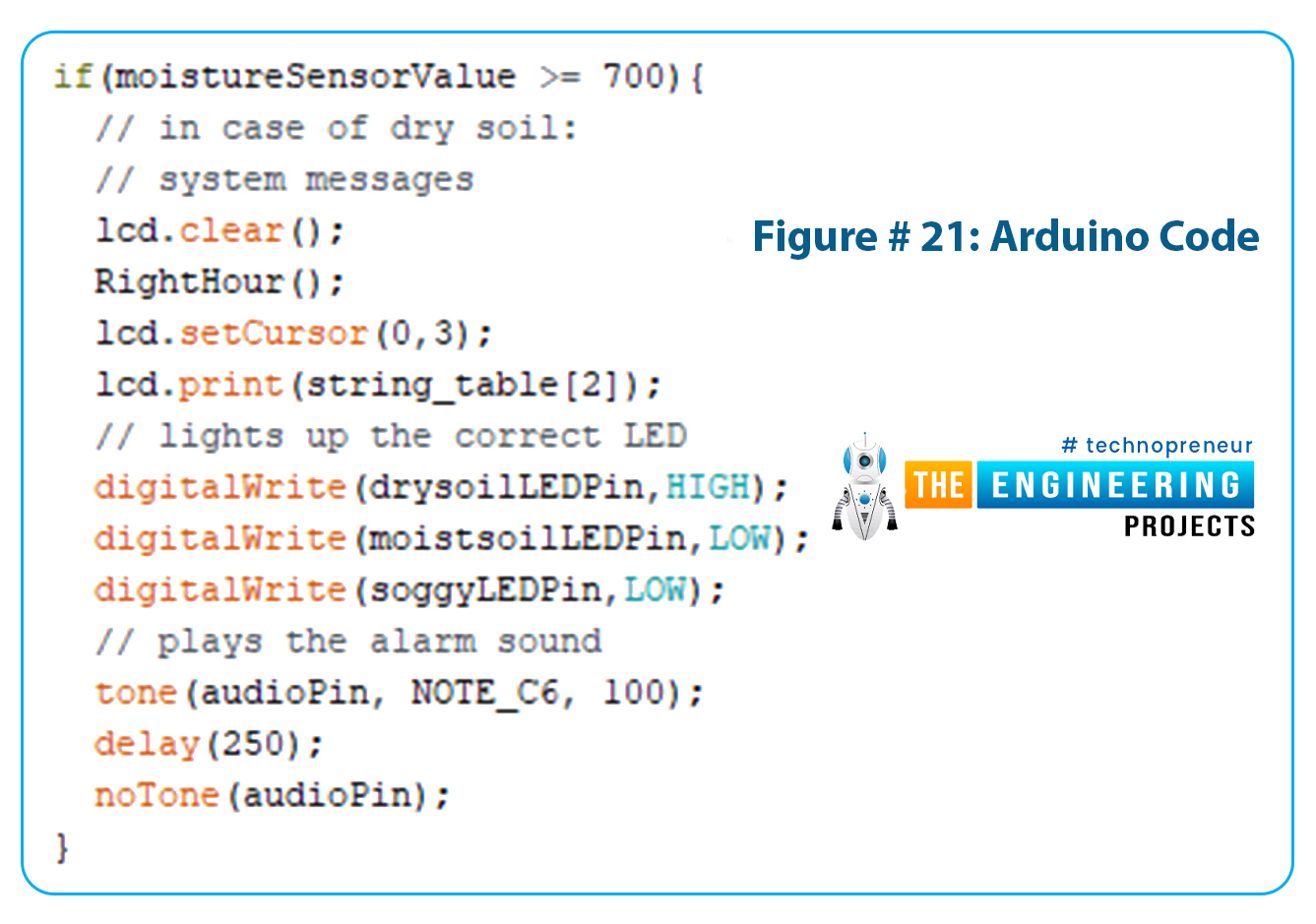 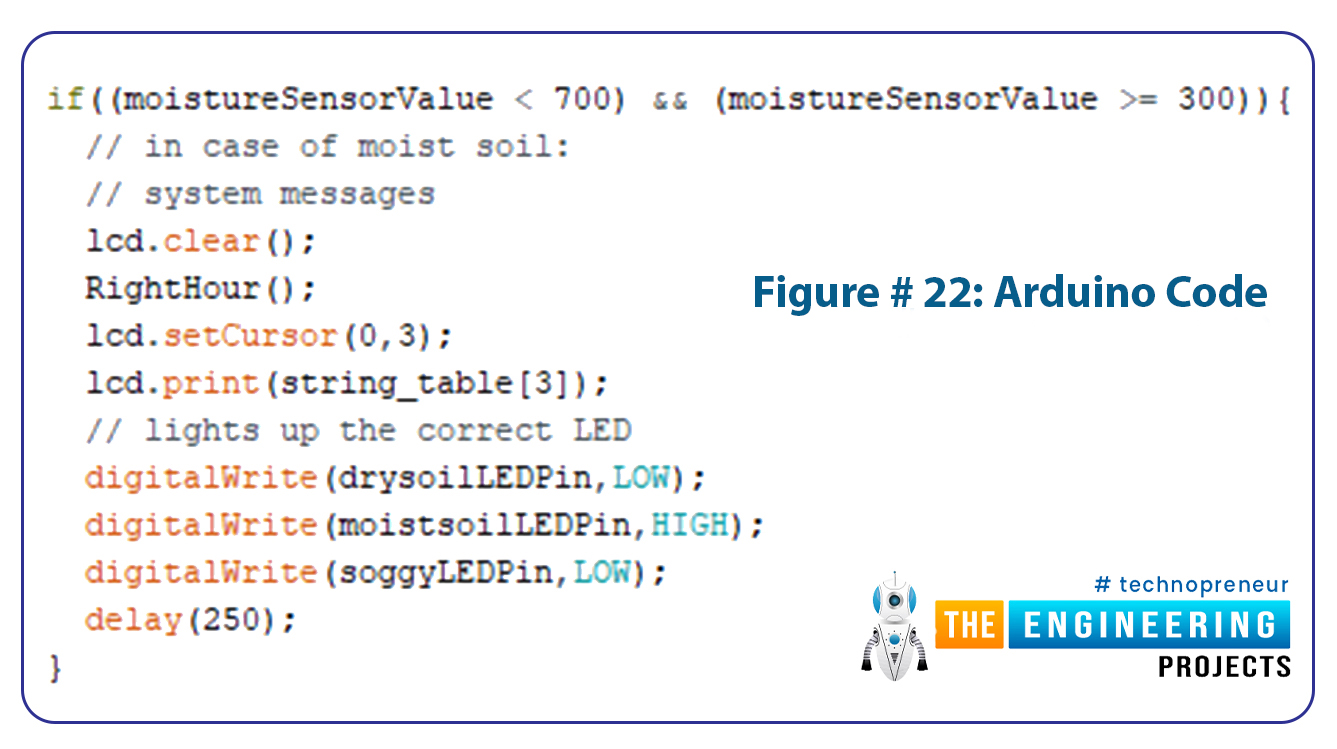 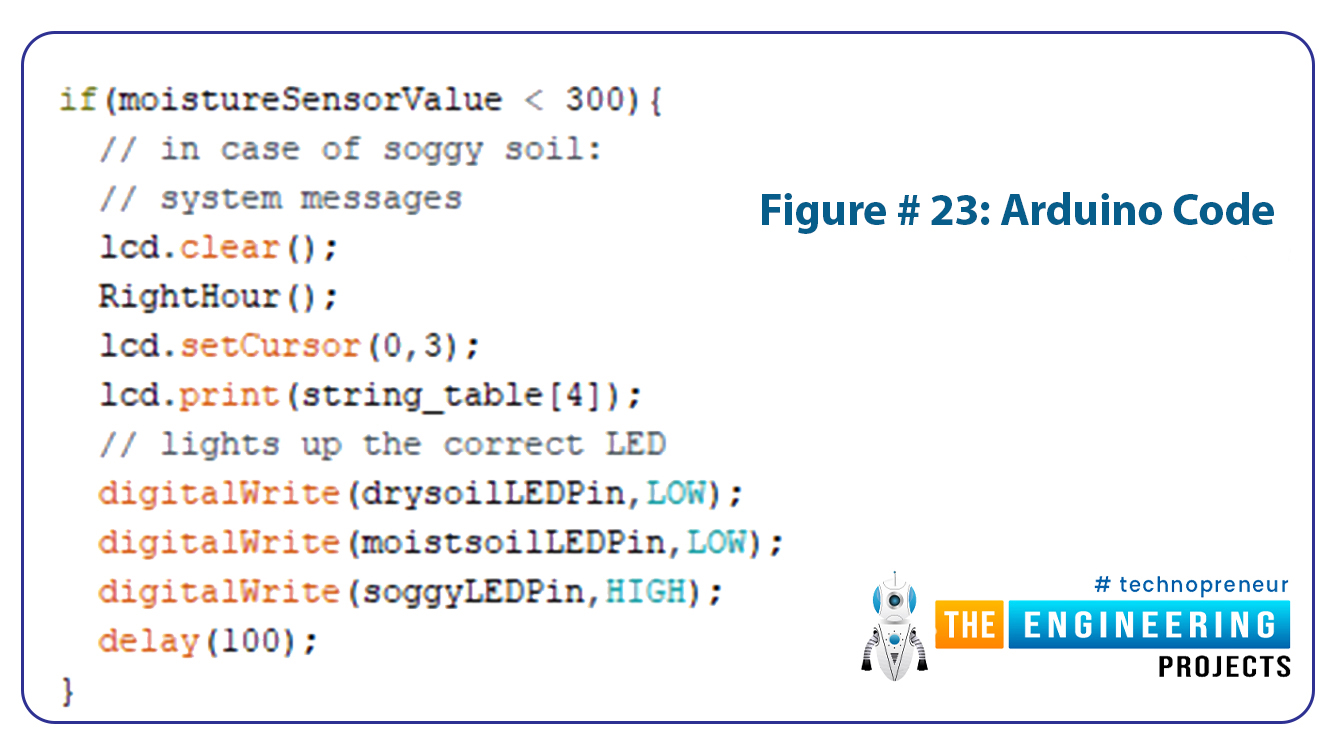 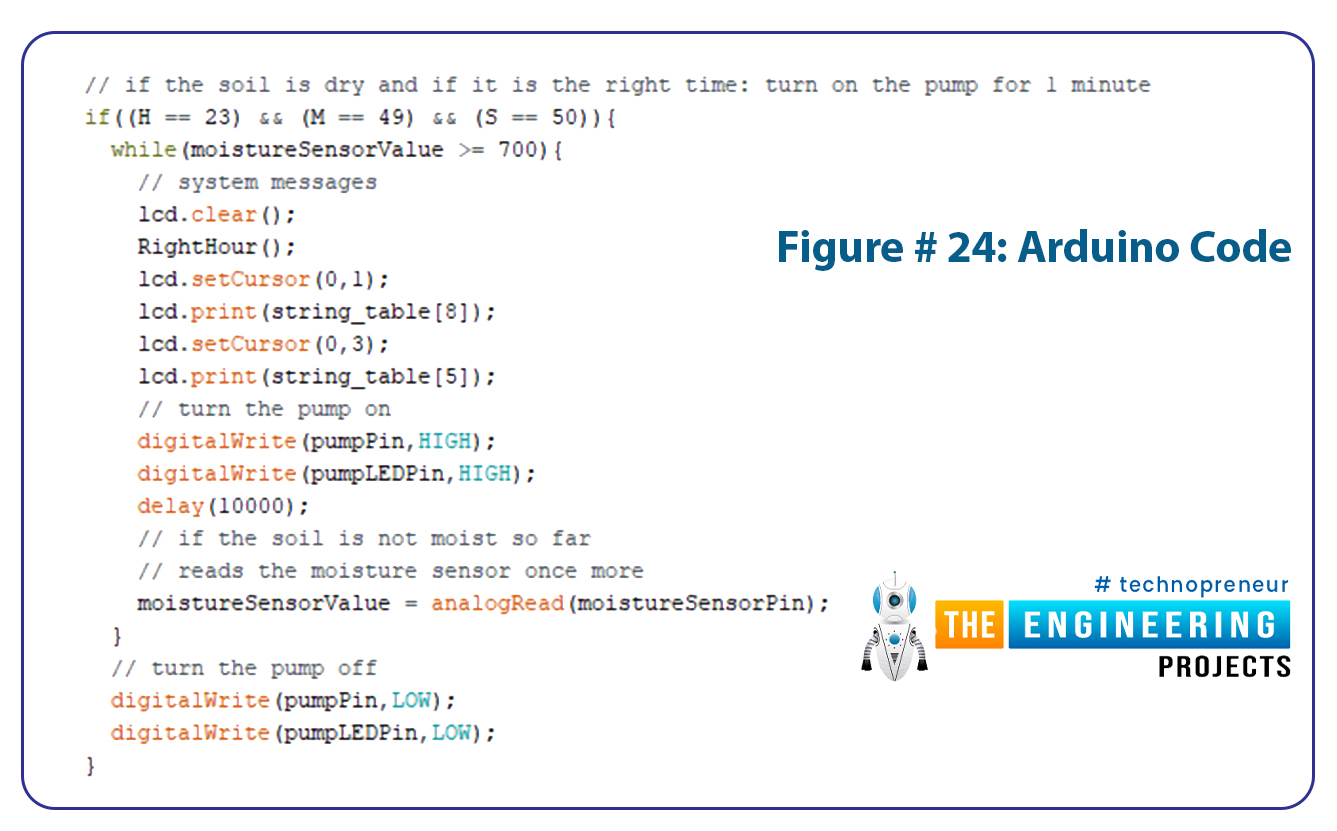 If you see the code closely, you may see the function of the right hour, which is called various times in the main code. The function code in itself is written at the bottom of the main code. This function is used for displaying the time and date on the LCD and also for fixing the date and time. 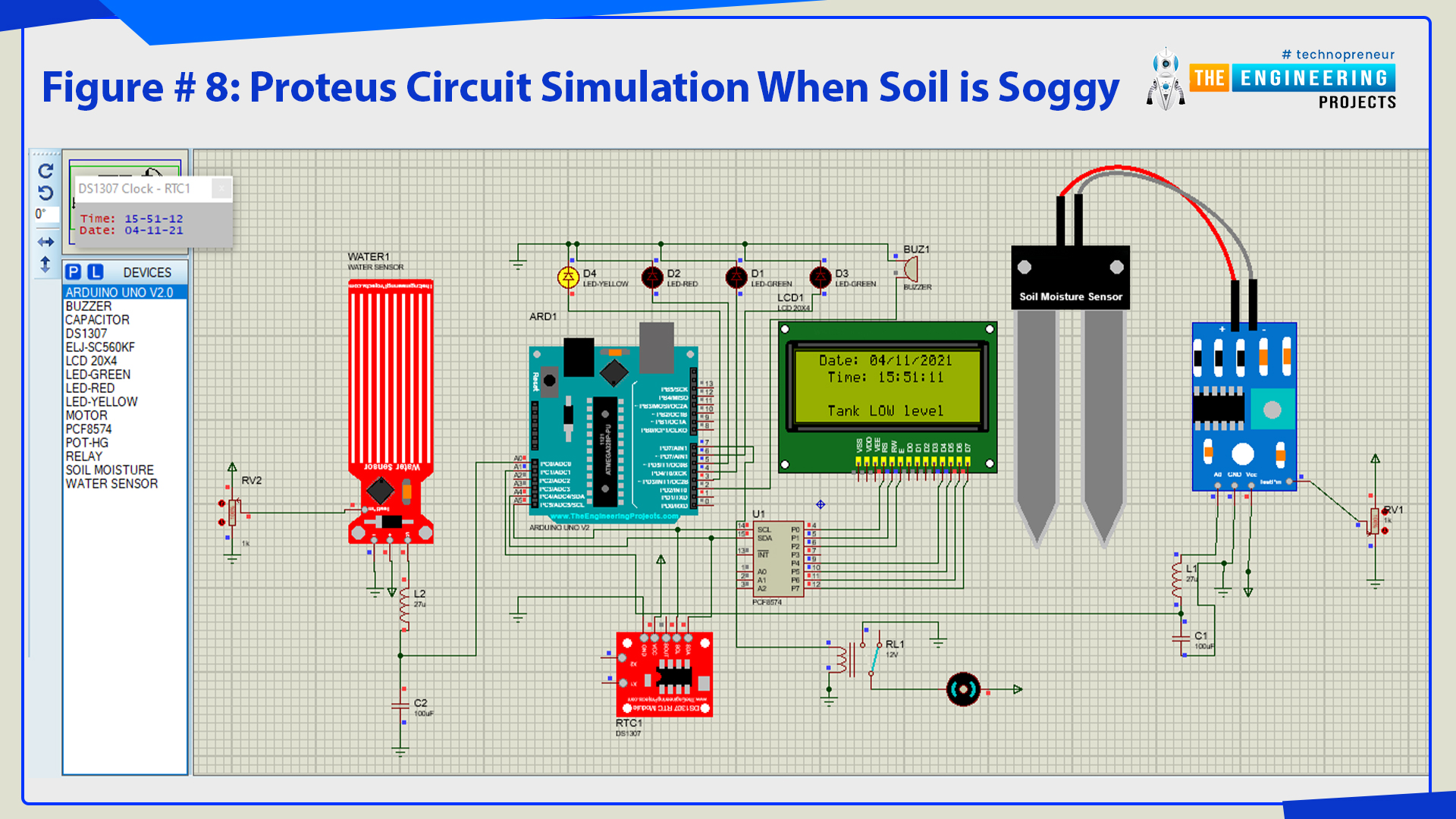 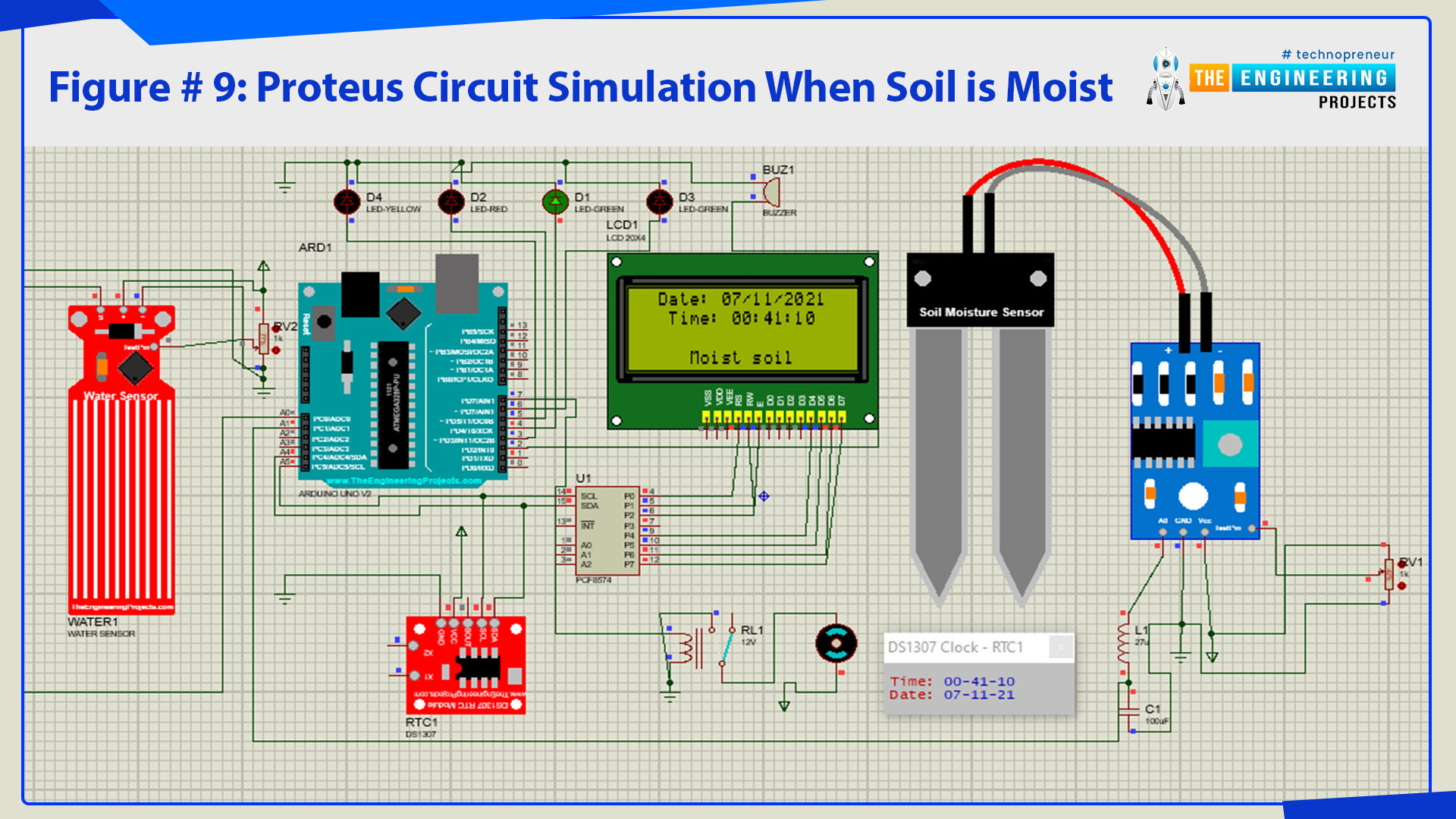 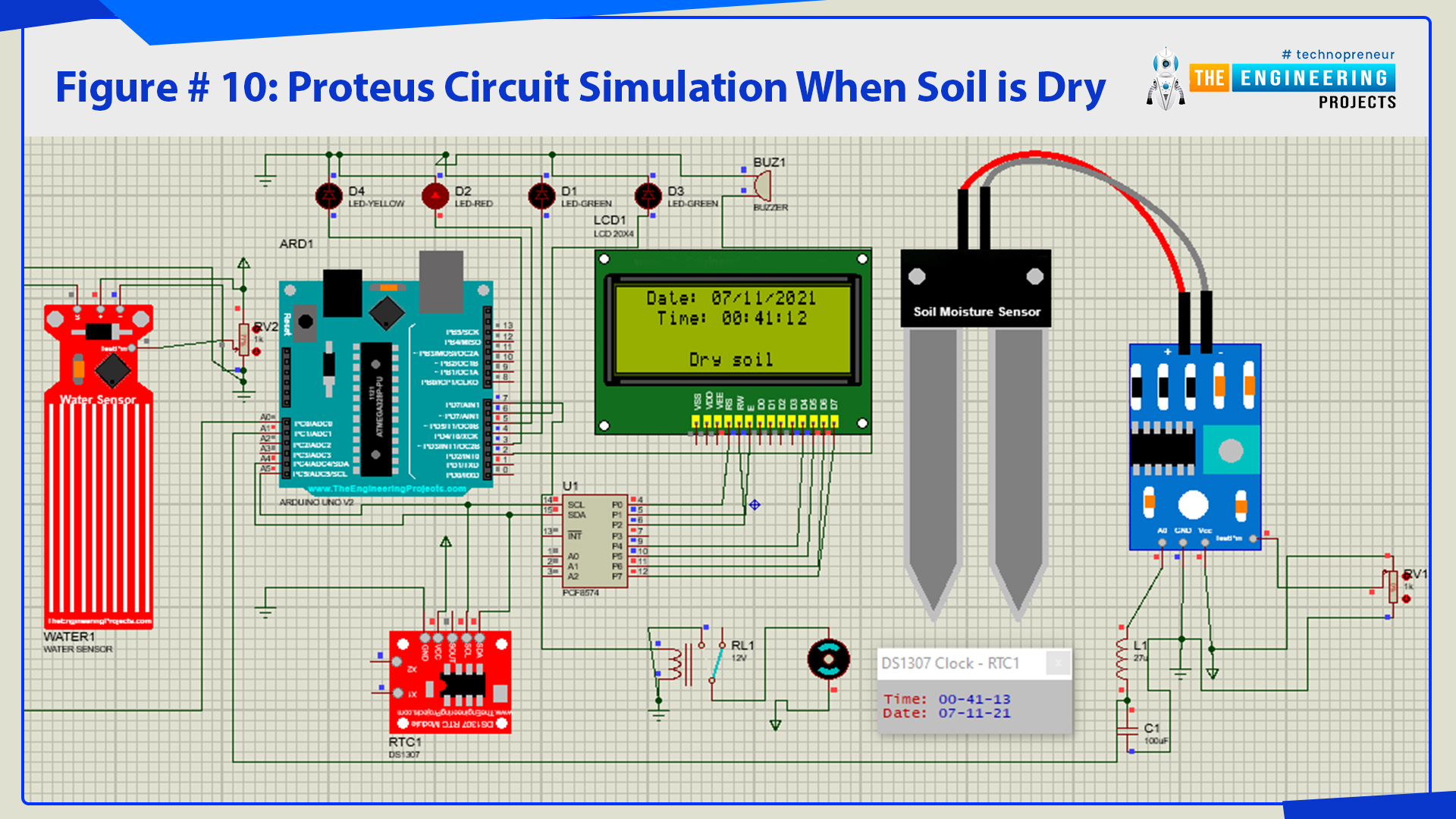 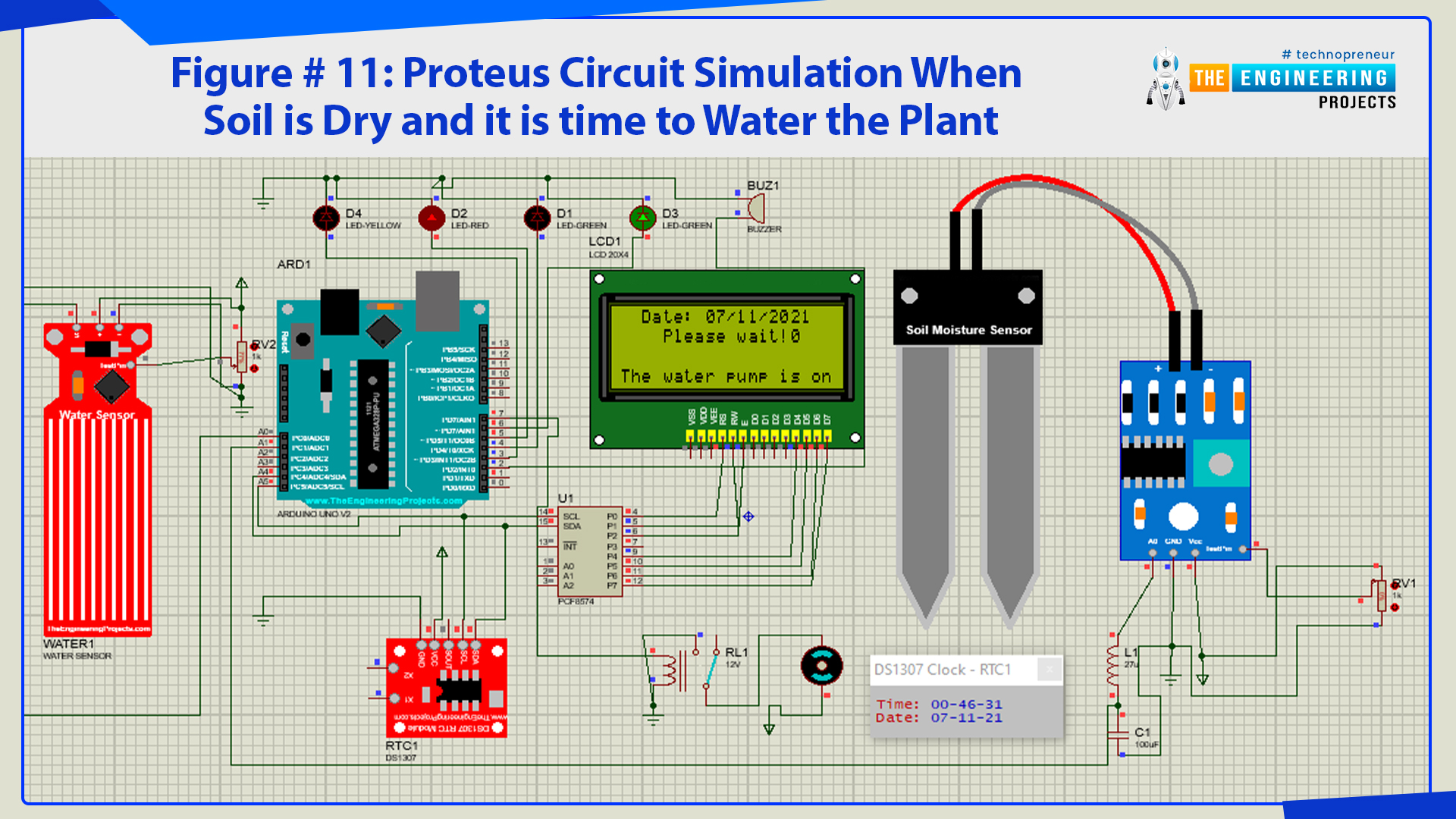 Figure # 11: Proteus circuit simulation when soil is dry and it is time to water the plant

As you can see from figure 8 that our simulation is running according to the program set at Arduino. You can increase or decrease the values coming from the sensors through the Potentiometer.

So, that was all for today. I hope you have enjoyed today’s lecture. If you have any questions, please ask in the comments. Thanks for reading.