Hello Mentees!, I hope you have a productive day. Welcome to The Engineering Projects. In previous tutorial, we have seen Basic Logic Gates in Proteus. where we have studied & simulated simple logic gates in Proteus. At the Instance, I am going to explain another Logic Gate. Let’s see what will we learn today.

The exclusive NOR Gate are also called ENOR or EXNOR Gate. Recall that the NOR Gate gives the output zero only, when both of its inputs are zero. But, when we talk about the XNOR Gate we define it as:

“XNOR Gate is the two input Gate that’s one of the exclusive gate that Give the output LOW only when the Only one input is HIGH and the Other Input is LOW.”

Hence, XNOR Gate Performs the equality function in the Logic Gates. That implies when the Inputs are equal, we get the Output HIGH otherwise LOW.

The XNOR Gate has minimum two inputs where the output is always one. The XNOR Gate is denoted by a plus sign with a circle around it between the inputs and a collective Complement or a Bar on the Expression. Thus, if A and B are two inputs of XNOR ate Gate then we denote the XNOR Gate as:

We can also Get a clear Concept about the XOR Gate have the Output with like the addition of bits of input. Yet, the carry is ignored.

The above discussion can also be explained when the statement is justified when we turn this discussion in the form of mathematical expression:

We’ll put the values one after the other in this expression to check whether our discussion works or not.

Hence by putting Condition in Statement 1 when input A and B , both are False we get:

At last, check the expression when A=1,B=1

Hence in accordance with the above discussion, we Design the circuit of the XNOR Gate is design in the Proteus ISIS. Lets start the simulation. 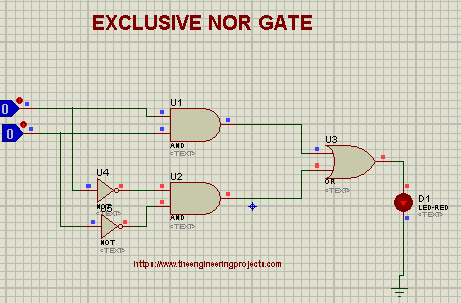 In digital Logic Circuits, a Truth Table is the Particular Combination of inputs and Outputs of a Circuit.

The Truth Table of XNOR Gate is given next:

If we look at the Example in which when we use the XNOR Gate we found the following diagram:

Instead of using many Gates in the circuit, the designers designed a single Circuit using Logic of the Gate discussed before. Graphically, the XNOR Gate is then represented by an additional curve in the input of the NOR Gate  and a Negation indication ( bubble) at the start of output terminal as:

At the instance, we are going to start the simulation in Proteus ISIS to see how can we use this Circuit and how our truth table is proved.

Notice that the Output is the same as we were expecting.

Recall the definition of IC:

“An Integrated Circuit is a flat chip made by a semi-conductor usually silicon that contains a whole circuitry of a Particular Gate or Circuit.”

Thus instead of the whole arrangement, we can simple use an IC that has same efficiency but provides the ease to use.

XOR Gate is used in many circuits as:

Consequently, Today we saw important information about the Exclusive ONR Gate. We took in about the Basic Definition, we observed the journey of the whole Circuit of exclusive NOR Gate from a circuit with all basic Gates to a single gate and then single Gate to the tiny Integrated Circuit. The Best thing about our learning was, we did it with a Practical implementation in the Proteus ISIS.