Hello friends! I hope you will be absolutely fine and having fun. Today, I will give you a detailed discussion about Introduction to 75N75. I have also shared different articles on Introduction to 2N3904, 2N3906, BC547, C945 and IRF540. You must go through all of these articles for the better understanding of this tutorial. 75-N75 is basically a Metal Oxide Field Effect Transistor (MOSFET). MOSFET is a transistor which is frequently used in electronic devices for the amplification and fast switching purposes.

MOSFET consists of four different terminals. These terminals include body terminal, source, drain and gain respectively. There two different type of transistors i.e. P-channel transistor and N-channel transistor. 75N-75 is N-channel MOSFET. It is designed specially to reduce gate charge and input capacitance. Mostly it is used for fast switching purposes. Therefore, in telecommunication and computer industry we can use it as a primary switch in DC to DC converters with a high frequency. It has several different features including fast switching applications, low gate charge, very low reverse transfer capacitance, high ruggedness and a lot more. It has a lot of real life applications including fast switching devices as well as General Purpose (GP) amplifiers. The further detail about the basics of 75 N75 and its features & applications will be given later in this tutorial.

75N75 is basically a N-channel Metal Oxide Field Effect Transistor (MOSFET). It is mostly used in switching applications. It is a low cost device with higher efficiency and is easily available in the market. This device has three basic terminals or pins named as sourc, drain and gate. Source is denoted by S, drain is denoted by D and the gate is denoted by G. Its is designed in such a way that it reduces the gate charge and input capacitance. It major applications include fast switching and general purpose amplifiers. 75-N75 is given in the figure shown below. 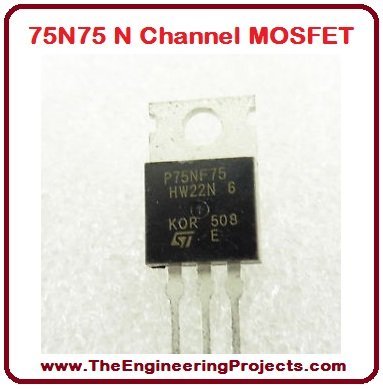 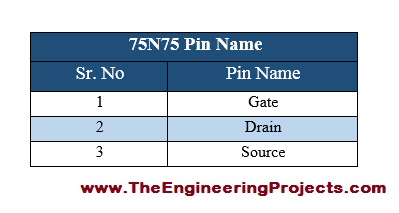 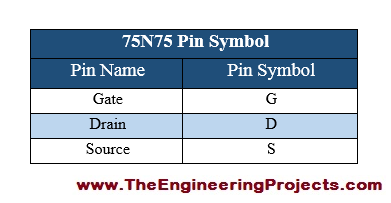 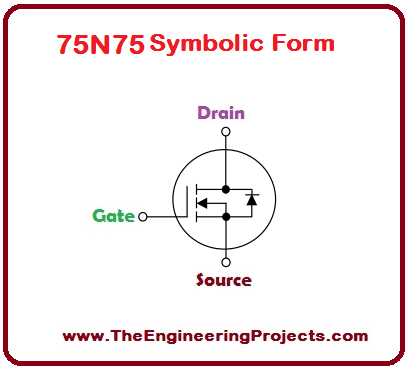 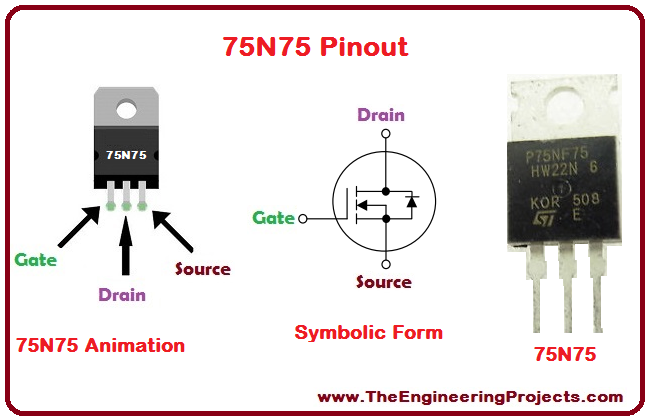 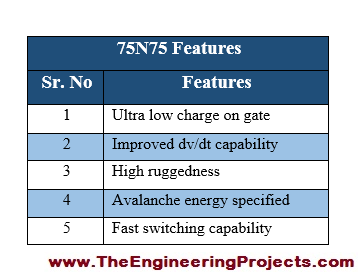 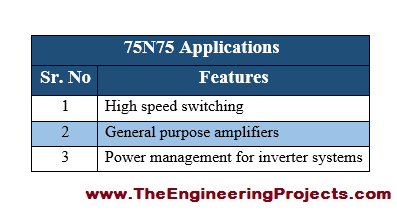 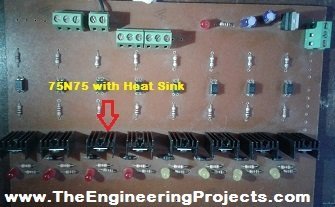 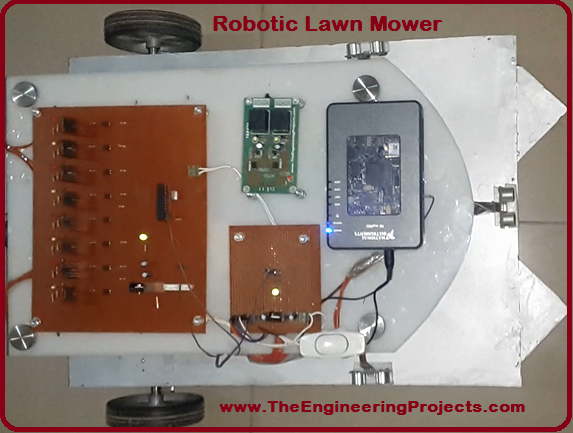 That is all from the tutorial Introduction to 75N75. I have provided all the basic and necessary details about the use of 75N-75 MOSFET. I have provided its pin details, their symbols, features, applications, symbolic diagram etc. I hope you have enjoyed the tutorial and it will be a helpful information for you all. If you have any sort of problem, you can ask us in comments anytime you want. Our team is always available for solving your issues. I will also share articles on other IC’s as well in my upcoming tutorials. Till my next tutorial, take care and bye 🙂