Hey Guys! Hope you are doing well. I am back with one more piece of nugget with valuable information. Today, I’ll unlock the details on the Introduction to PIC12F675.  It is an 8-bit CMOS PIC microcontroller, developed by Microchip and is based on FLASH. It comes with an 8-pin interface which is quite less than regular PIC controllers used in electronic projects that mostly come in a 20-pin or 40-pin interface and encompass more memory space with the ability to perform a number of functions on a single tiny chip.

In this post, I’ll cover each and everything related to this controller including its main features, pinout, pin description, block diagram, and applications. Let’s jump right in and nail down everything you need to know. 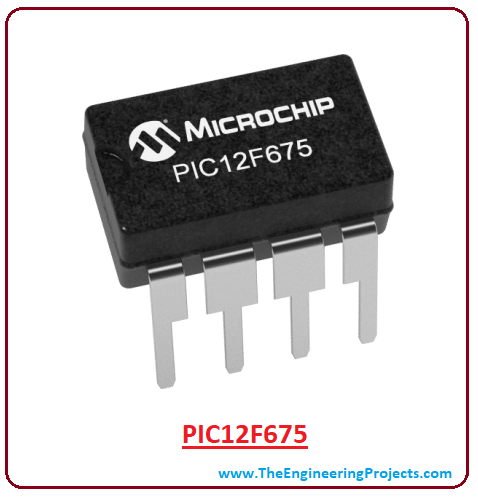 You have got a hold of the main features of PIC12F675. In this section, we cover the pinout and description of each pin. 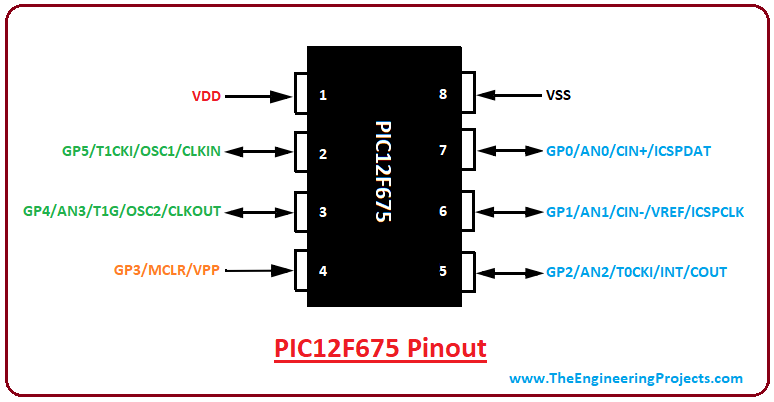 The oscillator start-up timer is a very valuable feature that keeps the module in the reset mode until the crystal oscillator becomes stable. Similarly, a power-up timer is added that generates a delay of 72ms when you power on the device, which gives a proper time to the power supply to stabilize and provide power signals in a continuous manner.

It is important to note, the Power Up Timer should be enabled, in order to generate the delay in returning the device from a BOD function. BOD comes with four operating modes that can be programmed by setting or clearing BOREN bits.

In-Circuit Serial Programming gives you the flexibility to check the compiled program in the project so you can easily make the required changes and makes it compatible with the running application.

A memory of the controller is very helpful to store the number of instructions in the form of code. The memory is mainly divided into two types

The first 32 locations of each bank are allocated for special function registers that can handle and control the peripheral functions and are classified as “Core and Peripheral”. While general-purpose registers are implemented as static RAM and lie at 20h-5Fh and are mapped across both banks.

Why Use PIC Microcontroller

Availability of special functions on a single chip is what sets apart PIC controller from other processors. Some real-time applications related to embedded and control systems can only be performed using PIC controllers as they come with high efficiency and decent speed to execute a number of instructions.

These controllers are cheap and remove the need for external components as they can perform a number of operations on a single chip. Power saving modes are added to the device that makes them an ideal choice for applications where power limitation is a major concern.

The watchdog timer is a remarkable feature added in most of the devices that save the module from going into the infinite loop that may hang up the device and puts the device in a total stall.

Needless to say, PIC controllers play a vital role in driving automation in real-time applications using minimum circuitry that covers less space and turns out to be lightweight.

That’s all for today. I have tried my best to give you everything related to PIC12F65. However, if you are feeling skeptical or have any questions, you can ask me in the comment section below, I’d love to help you according to the best of my expertise. You are most welcome to keep us updated with your feedback and suggestions so we always come with the relevant content as per your needs and demands. Thanks for reading the article.