Hi Friends! Hope you are doing well. In this platform we mainly cover information related to engineering and technology, no matter if you are a newbie or experts, you’ll find something handy that may resonate with your field of interest. Today, I’ll unlock the details on the Introduction to PIC18F4520. It is an 8-bit enhanced flash PIC microcontroller that comes with nanoWatt technology and is based on RISC architecture. Many electronic applications house this controller and cover wide areas ranging from home appliances, industrial automation, security system and end-user products.

This microcontroller has made a renowned place in the market and becomes a major concern for university students for designing their projects, setting them free from the use of a plethora of components for a specific purpose, as this controller comes with inbuilt peripheral with the ability to perform multiple functions on a single chip.

In this tutorial, I’ll cover each and everything related to PIC18F4520, its pinout, main features, block diagram, and applications. Let’s dive right in and nail down everything you need to know.

You have got a clear idea about this PIC18F4520 model. In this section, we jot down the pinout of the controller and cover a detailed description of each pin.

Every pin on the module comes with a unique function, used as per the requirement of the project. And some pins incorporate multiple functions. The following figure shows the complete pinout description of this tiny PIC module.

Features are very important for any device that makes it unique from its counterparts. The following figure shows the complete features of PIC18F4520.

This PIC model is capable of performing many functions similar to other controllers in the PIC community. Following are the main functions of PIC18F4520.

PIC18F4520 comes with three 16-bit and one 8-bit timer that can be used as a timer as well as a counter. All three timers contain internal and external clock select capability.

The timer mode mainly increments the instruction cycle while the counter mode is used to increment the rising and falling edge of the pin.

The BOR is a very useful function that allows this controller to reset once the Vdd (voltage supply) drops below a brownout threshold voltage. The multiple voltage ranges are used and provided to protect the chip once the power drops at the voltage supply line.

The Power Up Timer must be kept enabled, in order to put the delay in returning the device from a BOR function, t

The BOR mode can be configured both ways i.e. through BOREN settings in a register as well through programming.

In-circuit serial programming (ICSP), also called In-system programming (ISP), is a feature added to this device that makes it enable to be programmed in the required system after installation, setting it free from programming the device before making it compatible with the certain project.

This controller version comes with USART module, that stands for Universal Synchronous and Asynchronous Receiver and Transmitter, and is mainly used for setting up the serial communication with external devices.

PIC18F4520 contains a built-in watchdog timer that brings the controller in reset position if the program hangs up during compilation or gets stuck in the infinite loop.

It is worth mentioning here, this timer must be reset to the initial value after every 3 instructions in order to avoid it going to zero value in normal conditions.

The watchdog timer is more or less a countdown timer that starts from 1000 and ultimately goes down to zero.

Power On Reset function is very helpful and resets the controller and starts it from scratch when Vdd raises above a certain threshold value. This function is very useful to prevent the device from malfunctioning.

These categories help in identifying the areas of the device that are clocked at a specific speed. The Idle and Run modes can operate in any of three clock sources named primary, secondary, and internal oscillator block while Sleep mode is not involved in any clock source.

The switching feature is added in the power managed modes that use the Timer1 oscillator as a replacement of a primary oscillator. All clocks will be cleared and stopped working in the Sleep mode.

The MCLR pin is used for calling the external reset for the chip. The reset is triggered by keeping this pin at a LOW value and is not dependent on the internal resets.
The noise filter is added in the MCLR executing process that helps in detecting and removing the small pulses. The MCLRE configuration bit can also be used to disable MCLR input.

The memory of the module is very useful for storing a number of instruction which can be divided into three major types:

Let’s discuss each memory one by one and highlight the main functions associated with them.

The Program memory, also known as ROM memory or Non-Volatile memory, stores the running program permanently. It doesn’t depend on the power supply i.e. stores the program in the absence of the main power supply.  The ROM memory is about 32K and is made with FLASH Technology.

This memory is similar to ROM memory in one way or the other and stores running program permanently with one limitation i.e. the instructions in EEPROM can be controlled and modified during the controller operation. The EEPROM comes with memory space around 256 bytes and can be accessed and addressed by multiple control registers.

RAM memory, also known as volatile memory, stores the program temporarily and removes the stored program once the power supply is removed. It is classified into two main parts called

This memory is volatile in nature as it stores the program temporarily and is power dependent i.e. once the power supply is turned off the instructions stored in the RAM will be removed.

The RAM memory registers are the data holding places that can hold instruction, storage address, and any kind of data ranging from an individual character to bit sequence.

The data memory can be employed as static RAM where each register comes with a 12-bit address. This memory is comprised of a total 16 banks and each bank contains a memory space of around 256 bytes. 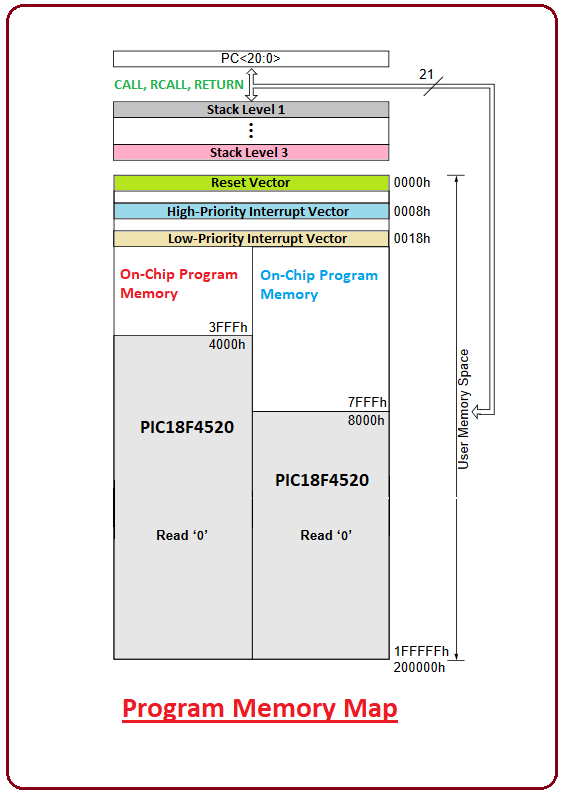 STATUS Register. This register is mainly used to switch between the mentioned banks. Setting the fifth bit of this register indicates the performance of bank1 while resetting it will address bank 0.

TRISA. This register plays a vital role to configure PORTA as an input or output. The value 1 describes it as an output and value 0 shows input.

TRISB. This register is similar to TRISA and used for deciding the pins as an input or output of PORTB.

W Register. This register is a GPR while all other described above belong to SFR. It is not associated with any register bank and is addressed by the program only. The required values are written on W register and moved to the target register before writing them down on the available ports.

You have got a brief overview of pinout, its description and main features of the controller. In this section, we discuss the main block diagram of the microcontroller so you can get an idea how each function in the controller is related and connected to each other.

8. Why Use PIC MicroControllers

That’s all for today. I hope this article has helped you got a complete overview of PIC18F4520 and the main functions associated with it. If you are unsure or feeling skeptical, you can ask me in the comment section below. I’d love to assist you in any way I can. Feel free to give your feedback and suggestions that help us provide you quality work based on your needs and requirements. Thanks for reading the article.