Hi Guys! Hope you are doing well. We are here to keep you updated with valuable information related to engineering and technology. Today, I will unlock the details on the Introduction to PIC16F690. It is a 20-pin Flash-based PIC microcontroller that comes with high-performance RISC CPU and mainly used in automation and embedded systems.

If high processing speed and memory space is anything to go by, this PIC module has already made a renowned place in the market where it can handle electronic projects pretty well. If you are a newbie or an expert, you can start working on the PIC module with little or no prior knowledge.

In this post, I’ll cover everything related to PIC16F690, its pinout, pin description, main features, block diagram, memory layout, and applications. Let’s dive in and explore everything you need to know.

You have got a brief overview of this controller. In this section, we uncover the pinout and pin details, so you get a clear idea about the function of each pin.

Following figure shows the complete pin description of each pin that will highlight the main functions each pin capable of doing.

In this section, we discuss the main features of PIC16F690 so you get a hold of this chip before you make a final decision to install it in the relevant project.

This PIC comes with an ability to perform a number of valuable functions like other controllers in the PIC community. Following are the main functions of PIC16F690.

Timers are very useful for creating a delay in the running function. PIC16F690 comes with three timers where two are 8-bit and one is 16-bit timer that can be configured both ways i.e. timer and counter. The former is used to create delay and increments the instruction cycle while later is used to count the number of intervals in specific running function and increments the rising and falling edge of the pin.

In-Circuit Serial Programming is another valuable feature incorporated into the device that gives the flexibility to program the controller after its installation in the relevant project.

PIC16F690 comes with built-in timer called watchdog timer that can be configured with programming. It is mainly used to reset the controller when the running program gets stuck in an infinite loop. This timer prevents the device from any malfunctioning and provides a preventive measure by resetting the device before it goes to any invalid software glitch. More often than not, watchdog timer acts like a countdown timer that starts from 1000 and gradually goes down to zero.

Power saving sleep mode is another valuable function added in the chip that generates a low current power down mode. The sleep mode can be abandoned using an interrupt, watchdog timer or external reset.

Memory plays a vital role to store the number of instruction on the controller. It is mainly divided into three types called 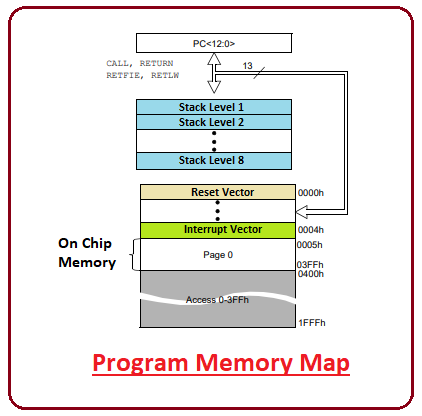 The data memory, implemented as static RAM, is divided into four banks and contain two types of registers called

General purpose registers store any modified or random value in the processor, and are organized as 8 x 256 in RAM and accessed by File Select Register. While Special function registers mainly control the peripheral functions and occupy the first 32 locations of each bank.

W Register. This register belongs to GPRs and is accessible by a program. It doesn’t take part in any register bank where desired values must be written on it and moved to the target register before defining them for available ports.

STATUS. This register helps in switching between the banks.

Block diagram is very helpful to have a deeper look at how different pins and components operate and attach to each other.

The following figure shows the block diagram of PIC16F690.

This PIC module comes with three ports A, B and C and each one contains 6, 4 and 8 pins respectively.

PIC controllers play a vital role in the development of many electronic projects that are directly or remotely related to automation. These controllers house a number of peripheral functions that prevent you from spending extra money to buy and connect external components for driving relevant operation.

PIC controllers and burners are readily available and you can get support from Microchip site that not only helps you pick a right microcontroller but also helps in the development of your desired project. PIC controllers are highly economical, cover less space and turn out to be very lightweight that make your project a true manifestation of innovative ideas.

That’s all for today. I hope I have given you everything you needed to know about PIC16F690. If you are unsure or have any question, you can ask me in the comment section below. I’ll try my best to resolve your queries. Keep us updated with your valuable feedback so we keep providing quality content as per your needs and demands. Thanks for reading the article.