Hey Fellas! Hope you are doing well. Today, I’ll uncover the details on the Introduction to PIC12F683. It is an 8-bit PIC microcontroller that contains eight pins and is mainly used for real-time applications related to automation and embedded system.

If you are a newbie or an expert, you need PIC controllers every now and then for the development of electronic projects. These controllers help you drive automation in your projects with the ability to perform a number of functions on a single chip.

In this tutorial, I’ll discuss each and everything related to PIC12F683 so you don’t have to grapple your mind surfing the whole internet and find all information in one place. Let’s dive in and break down everything you need to know.

Features of any device are very important to get the main idea about the device before installing it in the relevant project.

You have got a complete overview of the features of this module. In this section, we cover pinout and pin description of the chip.

The following figure shows the pinout of PIC12F683.

Following table shows the pin description of each pin that highlights the major functions associated with each pin.

As I already mentioned, this PIC module is not like some other fancy modules in the market, but some common functions make this device suitable for electronic projects. Let’s discuss some major functions of this device.

There are three timers incorporated in the device where two are 8-bit and one is 16-bit timer. All these timers work both ways i.e. timer as well as the counter. Timer mode is used to create a delay in the execution of relevant functions and increments the instruction cycle. While the counter mode is used to count the number of intervals in the specific functions and increments the rising and falling edge of the pin.

There are some other timers that are separated from mentioned timers and work in the same way to create a delay in the running function of the controller. These timers include

The watchdog timer is a remarkable addition in the device that resets the device and puts it in a stable condition if running program hangs up or gets stuck in an infinite loop. When you are playing with the electronic device, it is very difficult to handle and reset the device manually, this is where watchdog timer comes handy and prevents the device from any malfunctioning.

Power saving sleep mode is very helpful for saving power that generates a low current power down mode. The sleep mode can be removed using an interrupt, external reset or watchdog timer.

In-Circuit Serial Programming is another valuable feature added to the device that gives the option to program the controller after its installation in the relevant project, setting you free from separately testing the compiled program every time.

What this module lacks in terms of USART, SPI, and I2C communications, it covers up for incorporating remarkable ADC converter into the device which makes it an ideal choice for sensor interfacing and for the applications that require analog to digital conversion.

The ADC module is 10-bit and comes with 4-analog channels which are quite less than channels available in other controllers that normally contain 7 or 12 analog channels.

The MCLR pin calls the external reset for the chip that is triggered by keeping this pin LOW. The noise filter is incorporated in the MCLR running process that detects and removes the small pulses. The MCLRE configuration bit is normally used to disable MCLR input.

Memory, as the word defines, is used to store a number of instructions in the form of code. Memory is mainly divided into two major types

The former is used to store the instructions permanently and, more often than not, is known as ROM or Non-Volatile memory. This memory is not dependent on the power supply and comes with an ability to store the information in the absence of power supply. 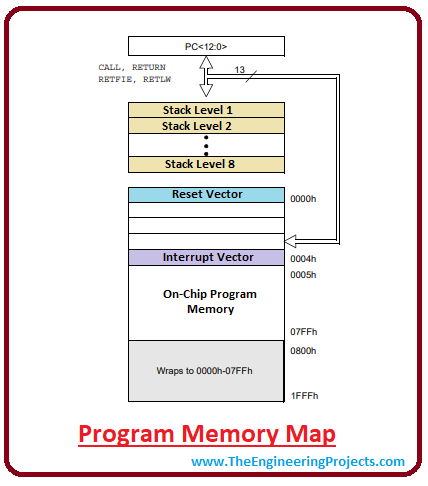 EEPROM also falls under Program memory and comes with 256 bytes of memory space and is similar to ROM in one way or the other where it stores information permanently but comes with one exception i.e. the EEPROM instructions can be controlled and modified during the controller operation.

The data memory is known as RAM or volatile memory and stores information temporarily i.e. it depends on the power supply and all stored information is gone with the removal of a power supply.

The data memory, implemented as static RAM, is divided into two banks which further contain two types of registers called

General purpose registers store any modified or random value in the processor, and are accessed by File Select Register. While Special function registers mainly control the peripheral functions and cover first 32 locations of each bank.

W Register. The W register falls under GPRs and is accessible by a program. It is important to note that, this register doesn’t take part in any register bank where required values must be written on it and moved to the target register before defining them for available pins.

Until now, you have got a clear idea about main features, pinout, pin description, and compiler used for this PIC module. In this section, we will discuss the block diagram of this tiny chip.

There is no PORT marked on this module, instead, pins are labeled as GP0 to GP5 where VDD and VSS are voltage supply and ground pins respectively. This PIC version falls under the category of Microchip’s Low Pin Count Patent.

PIC modules take the whole automation industry by storm with the ability to perform a number of functions on a single tiny chip.

These modules stay ahead of other processors in terms of efficiency and the pace with which they can perform and execute a number of instructions.

Everything is added in the small onboard chip including timers, counters, in-circuit serial programming, ADC converter and the main features required to embed automation in the electronic projects. You name it, they have it.

If you intend to develop any project, the economic price is a major concern. These chips are highly economical and are readily available in the market.

Compact and concise circuitry added on the boards make these devices lightweight which cover less space and prevent you from spending loads of money for buying external components.

That’s all for today. I hope I have given you everything you needed to know about PIC12F683. If you are unsure or have any question, you can approach me in the comment section below. I’ll try my best to help you according to the best of my expertise. Keep us updated with your valuable feedback and suggestions, as they help us provide quality content as per your needs and demands. Thanks for reading the article.