Hey buddies, Hope you are fine. We are here with a new tutorial of Proteus. Before this, we tough you about Half Wave Rectification.

In this article, We will perform the experiment of Full Wave recertification through bridge rectifier in the Proteus by making the circuit that is almost identical to the real-life experiment as all the components and working is similar.

This can also be called as full wave rectification through bridge rectifier.

1.What is full wave rectification

A comprehensive definition of full wave rectification is:

“Full-wave rectification is the process to converts both polarities of input (sinusoidal)wave to pulsating DC (Direct current).”

Let’s jump to the 2nd Question and find the answer.

If you have this, then you are really a good learner and I am here to solve the question.

As we all know a diode can pass the electricity through it on in one half cycle. So we can use more than one diode and use it in many ways.

One can get smooth waveform by using the ripple frequency can be obtained.

In Proteus, we can make the desired circuit easily as it has all the components and functionality.

For a concept, it will be useful to know that the bridge has four corners out of which one is called anode, 2nd is called cathode and left and right corner has the output.

So, let’s move towards its construction.

These values vary according to the type of components used, the value of frequency and amplitude of the sinusoidal wave source and some other factors. We got the output. The Yellow (A Terminal) wave shows the input that is sinusoidal wave. Whereas, the blue wave (B terminal) shows positive half cycle and magenta one (C terminal) shows the negative half cycle. And the magic is, both the outputs are direct current but we are getting full wave as the combination. 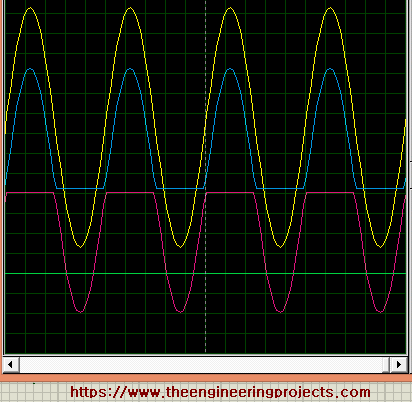 In this way we get the result of two waves that gives us the full wave rectifier as aggregated effect.