Hi Mentees, Welcome to a new tutorial at The Engineering Projects. Today You will unearth about Common Collector bipolar Junction Transistor Amplifiers. Before this, we learnt about two types of Configurations of Transistors named Common Emitter BJT Amplifiers and Common Base BJT Amplifiers.

In this tutorial We’ll discuss about:

So that, you can get the best understanding about the topic and its practical implementation.

1st  of all, We’ll have a brief definition of the Common Collector Amplifier:

” A type of Bipolar Junction Transistor Amplifier is called Common Collector BJT Amplifiers in which Collector is common to both Base, Base region is used for input and emitter is used to take the output of the Amplifier.”

It is one of the Configuration of the Transistor and is used in many kinds of circuits due to its efficiency. Other two Configurations are;

All of them acquire their Own Construction, characteristics and advantages as we as disadvantages. Common Collectors are also called as Emitter follower Configuration as the emitter voltage follows the base voltage.

It is Always useful to get core information about the circuit before its Implementation. Let’s see what a Common Collector amplifiers is.

Recall that  the are two types of Transistors i.e, 1. NPN 2.PNP. the Transistor we are using NPN transistor for our Experiment because in this type, the electrons are majority carries that have more mobility than holes ( majority charge carriers in PNP transistors) therefore, we get quick and easy output due to best electron flow.

The current gain of this type of amplifier is also taken as the division of the Emitter current with the base current and mathematically it is stated as:

Voltage Gain of Common Collector BJT Amplifier is considered to be the unity, i.e. 1 and is obtained by the formula given below:

where in Common Collector amplifier we give the input to Base and take the output from the emitter of the transistor.

in this Configuration the Emitter current is taken as the sum of base current and collector current.

we can use this equation in others ways as,

we can also say that the collector current is approximately equal to Emitter current because base is very thin region and passes a minute amount of current through it.

At the instance, we will test the circuit given in the circuit diagram in Proteus. the material for the Circuit is given below.

NOTE: You can also connect just one Ground terminal to the circuit if you connect the Circuit with a wire at the bottom.

Now, We need an output device to examine the output. Therefore, We’ll use Oscilloscope. Choose it from “Virtual Instrument mode”.

Before Starting the simulation, I am going to change the values of the Components I used because the default values will not give us the required Output. 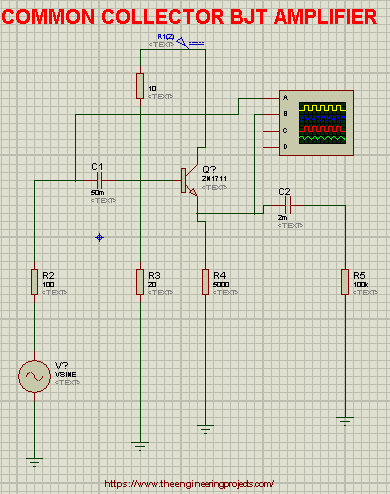 NOTE: The amplifiers are sensitive to the temperature and the type of transistor used, hence their must be the practice to get the best output.

NOTE: Sometimes, It becomes the disadvantage of the Common Collector bipolar Junction Transistor Amplifier that they have no voltage Gain.

Today, we ascertained the Basic Common Collector BJT Amplifiers, learnt some Concepts about it, saw the Implementation in Proteus ISIS, saw some characteristics and found the advantages of the Common Collector Configuration.