Just before the Experiment, it is useful to revise that:

Transistors are three terminal, unipolar Devices. The terminals of Junction Field Effect Transistor are named as :

The Gate Terminal is common to both Source and Drain.

Prior to start, let’s clear some Concepts about Junction Field Effect Transistor.

Resistor is an electrical device. we define the resistors as:

“A Resister is a two terminal Passive electrical device that shows the electrical resistance and is useful in almost every Circuit.

Resistors can be used to reduce or control the flow of current , terminate transition lines and such other functions.

The basic Definition of Pinch off voltage is:

“The voltage applied between the Drain and the source at which the current maximum current flows through the circuit provided the Gate voltage is zero is called the Pinch off voltage.“

when the value of voltages is less than the pinch off region, the voltage enters to another region called ohmic region of JFET and the transistor acts as a resistor in this region.

The Controlling Voltage of Junction field effect transistor is defined as:

FET’s are widely used in the worlds of electronics because of their size and the performance. We’ll apply JFET’s in the making of two of circuits:

During the Implementation of the Circuits, we’ll use N-type JFET because of the better flow of electron of this kind of JFET. In N-type JFET the majority charge carriers are electrons.

I am going to explain it one after the other.

A Field Effect Transistor can be use as a constant current Source. That spell out that if JFET’s are designed so, they can provide a constant current across the load resistor, no matter how much current is provided at its input. The ability is due to the near horizontal line in the drain characteristics of the JFET.

Recall that resistor is a two terminal Device that reduces the current flow, divide voltage or adjust signal lines. But, carefully Controlled JFET can be used to overcome the resistance through the resistor that come in between the JFET and the Voltage source.

In the circuit, when the Vgs is greater than the pinch off voltage. mathematically,

To make the circuit for Constant current Source, we need the Components as:

This is the step where the Circuit should be arranged so, to get the required output. 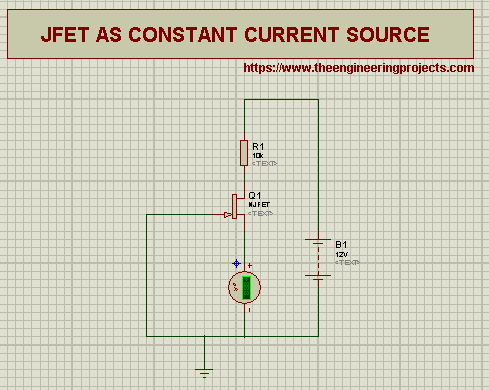 NOTE: you can also use a variable resistor.

The ammeter shows the value of the 0.40 miliamps. 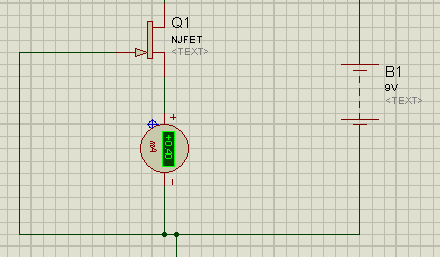 The same experiment can be done by varying the value of battery and recording the values.

A Chopper is the application of Transistor that show us the output as the square wave. We define the Chopper as:

“Chopper is an electronic circuit used to take the amplified Direct current by using some type of transistor or other device.”

One can use any kind of transistor  e.g Bipolar Junction Transistor tor make the Chopper circuit. But, Junction Field Effect Transistors are better for this purpose due to the field control of the JFETs.

In Choppers, the FET act as a variable resistance. 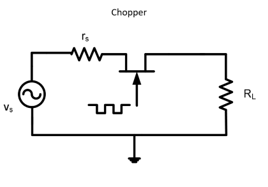 Lets rush towards Proteus to apply the circuit.

Implementation of Choppers in Proteus ISIS

The Output of the circuit is:

This Conversion is important in some Circuits. The output of the Chopper is in the form of square waves.

Thus, today we learnt about the JFET along with the applications of JFET as Constant current and Chopper in detail and saw their Implementation in the Proteus.