Hello Learners, Welcome to another useful tutorial at The Engineering Projects. In the world of electronics and circuits, many useful devices are designed that can minimize the requirement of large and complex circuits. At the Present time, we are working at such a device works very near to the base of many circuits i.e, IRFZ44N MOSFET. We’ll  approach to the answers of following Questions:

You will have some important chunks of information about the topic in DID YOU KNOW sections.

What is IRFZ44N MOSFET

As you can see, MOSFET is a acronym of Metal Oxide Silicon Field Effect Transistor. We introduce the IRFZ44N MOSFET as:

IRFZ44N is an important type of N-type MOSFET that consist of three pins, have a hgh Drain current and a low Rds Values.

It is the type of IGFET( Isolated Gate Field Effect Transistors). A large amount of MOSFETs are used as switch every year. When we compare it with BJT , we find that it requires almost not current to control the load current unlike BJT. If you want in-depth study on this mosfet then you should have a look at IRFZ44N Datasheet.

MOSFET is a semi-conductor device that is Fabricated by the Controlled oxidation of Semi-conductors (Silicon in most case). It can work in both modes of operations i.e, Depletion and enchantment.

When we observe the IRFZ44N MOSFET we find that it consist of mainly three pins as described below:

Vgs: The IRFZ44N MOSFET is a voltage controlled device that means it can be turned on and off when we apply a required threshold Voltage. This voltage is termed as Vgs.

Ids: It is the amount of current that passes from Vds to the IRFZ44N MOSFET. The direction of this current is important during the Operations of IRFZ44N MOSFET.

The MOSFET is a better version of Junction Field Effect Transistor. Due to the limitation of JFET for the conduction in one side only ( some time it is the advantage), the Designers made a new type of Transistor that can change the conductivity when the amount of applied voltage is change and named them as MOSFET.

In this mode the Transistor is closed during the zero bias voltage at gate terminal. Hence the IRFZ44N MOSFET  is said to be switched ON. The channel width increases when the Gate Voltage is increased to the positive side. in return, the current Ids increases.

During the situation when Gate voltage’s value is decreased, the Width of the channel decreases and Ids follows the same rule.

The IRFZ44N MOSFET is also known as the Power MOSFET. It is 22oAB through hole package that has three pins. The top metal tab is also called the drain because both of them are same.

This mode is usually considered as normally open switch as the transistor does not conduct the current when the Gate Voltage is zero. If we apply a positive voltage to the gate then a Drain current follows through the Gate.

The Enhancement mode of IRFZ44N MOSFET  enhances the channel because when the Drain current’s value is increased the channel width increase and the decrement of the width is for vise versa.

To understand the whole discussion mentioned above, Let’s make a characteristic Curve of IRFZ44N MOSFET in Proteus ISIS. To do this, just follow the simple steps given next: 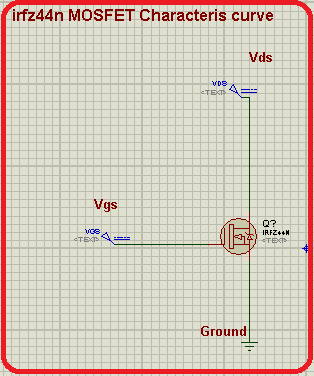