Hello Learners! We hope you are fine. Welcome to The Engineering Projects. The Automatic Light Detector is the device that automatically senses the light incident on it. Let’s have a glance about the main points of discussion:

Moreover, you’ll have some chunks of interesting information in DID YOU KNOW sections.

“An Automatic Light Detector are the photoelectrical devices that works with the principle of flow of current and turn the circuit components on/off automatically when the light incidents on its circuit.”

A very simple and usual application of the Automatic Light Detector is the Automatic Street Lights system. Have you ever noticed that there are hundreds of street lights around you when you go for a ride. If someone had a duty to turn them on and off manually, even they have a combine circuit. But it would be a time taking job. Moreover, there will be more chance of energy wastage. But all the street light have the Automatic Light Detector system so that they turn on and off automatically.

Prior to start the construction of the circuit, Let’s have some brief about the components of the circuit for Automatic Light Detector. The circuit that we’ll use depends upon the following components:

LDR or Light Dependent Resistor is the heart of Automatic Light Detector. These are the electronic components, made up of high resistance semi-conductor material, that detect the light and alter the operation of the whole circuit according to the type of the circuit. The LDR is passive and it does not produces any electrical energy. LDR are used in many cases because of their rugged nature. They are not sensitive to dirt and rough environment and therefore have a long life and can be used in outdoor lights.

Other different types of Light Sensors are:

The full form of n-p-n Transistor is the negative positive negative Transistor. In this type of  It is designed to pass electrons from emitter to collector. so the emitter “Emits” the electrons to the base. Obviously, in case of conventional current the current flows from the collector to the emitter. In this Circuit the base of the n-p-n Transistor is connected with the one end of variable resistor and the LRD, emitter is connected with the battery and the variable resistor and the collector is joined with the LED directly.

Resistors are the passive devices consist of two terminals and the body. These are the electric components that are widely use to resist the sudden flow of electricity through a circuit. In many case, they are life saving for the components of the circuits. Other uses of resistors includes:

The key difference between them in the circuit of Automatic Light Detector is, the resistance (Resisting ability) of variable resistor may be change according to the need of time.

A battery is the Lead-acid type cell that consists of the collection of four 1.5V D battery cells. It gives the energy to the components of the circuit for their functioning. The Battery will give the power to the circuit so that the flow of the current will illuminate the light or pass through the LDR.

The full form of LED is the Light Emitting Diode. It is a simple device used in our daily life as well that illuminates when the energy in the form of current or voltage is applied to it. In our circuit, the main function is the turning the on/off of this LED.

When we look at the circuit of Automatic Light Detector, we found that the whole working start from a 6v DC Battery. This battery give the energy to the circuits.

At the day-time the LDR has a low resistance of about 100 ohms. In this case, the resistance of the LDR is less than the other devices of the circuits and we all know that:

The current passes through the path that shows the less resistive path.

The power from the battery passes through it and then from the variable resistor easily. 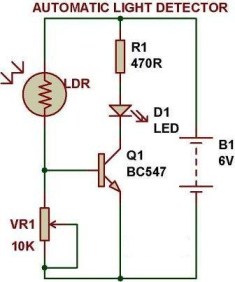 At the Night-time when the light, incidents on the LRD is less , the resistance of LDR increases to a high level of approximately 20 mega ohm. Due to this high resistance, the LDR act as an open circuit and does not allow the flow of current through it. For this condition, the current will flow from other components of the circuit and hence the current enters o the base of the n-p-n Transistor BC545. This allows the current to pass from the LED and hence it illuminates.

Before any practical implementation, one should always check it in the simulation for practice. Luckily, for our experiment, the Proteus contain all the components through which we can check the functionality of Automatic Light Detector.

Fire up you Proteus software and Choose the components one after the other. Once selected, design a circuit of Automatic Light Detector by following these simple steps. 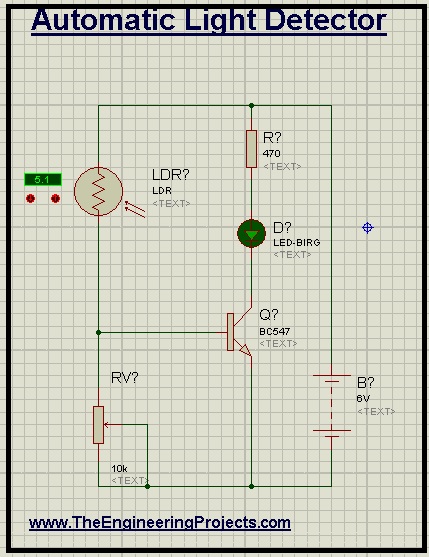 Some of the practical applications of Automatic Light Detector are given below;

Truss today we learned about the Automatic Light Detector/sensor. we saw what components are present in its circuit, how the system works and how can we implement it in the Proteus software. We hope you had an interesting piece of study through our article.