Are you confused between the terms data types, variables, and operators in the C# programming language? If so, then all your confusion will disappear soon because you have found us. As we all know that C# is among the most commonly used programming languages in the world. It is a Microsoft-developed coding language that operates on the.NET Platform. It is utilized to create online applications, computer apps, smartphone applications, videogames, and many other things. When we study C# programming languages, it is crucial to understand these terms: Datatypes, Variables, and Operators. But, why? Keep reading till the end to find out!

COOL, a brilliant abbreviation that represented “C-like Object Oriented Programming Language,” has been the initial name of C#. However, Microsoft was unwilling to retain the amusing nickname due to trademark protection issues. And thus, it was given the name C# (C Sharp). Moreover, few people know that the C# programming language was initially created to compete with Java. It is indeed correct to conclude that the objective has been accomplished, based on the rapid surge in viewership and positive feedback from both novice and experienced programmers.

The simple reason why programmers prefer the C# programming language is that it contains many exceptional features and advantages. Some of these are listed below:

Thus, there are many reasons why programmers prefer the C# programming language and not others.

Data Types, Variables, and Operators: What Are These?

When you are ready to run your C# environment, it is crucial to have a deep understanding of the terms: Datatypes, Variables, and Operators. Most novice beginners fail to understand these terms and as a result, they make human errors while running the C# program. But, we want you to have the best understanding of everything, and that is why this article is here. Let us now study these terms in detail below:

A data type is basically a data collection system that contains a particular kind or set of numbers. It determines the kind of data which can be stored within a variable, like integers, floating points, and symbols. These play an important role in C# programming. In the C# programming language, data types are classified into three types which are: 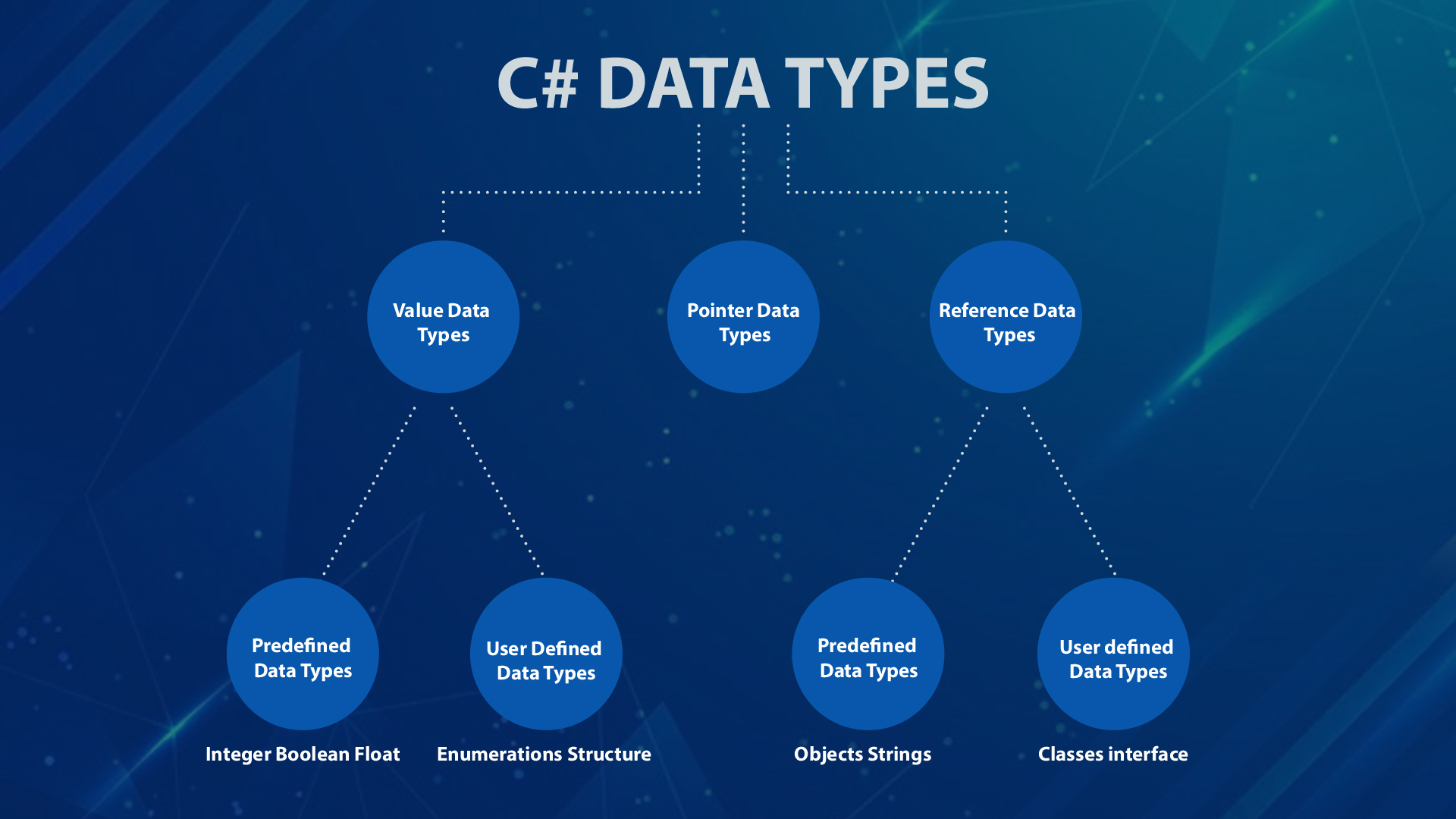 Let us discuss all the types one by one in detail. So, start taking notes!

The first one is the Value Data Type. It is dependent on integers and floating digits and is generated from the category order.

A data value could be allotted effectively to the Value Data. Both marked and unmarked characters are allowed in Value Type. Moreover, some value data forms are char, int, and float, and char. They also include integer values, floating figures, and alphanumeric characters individually. The software generates space to save the numeric type values whenever you specify an int kind.

The following is a C# script that displays several value data kinds: 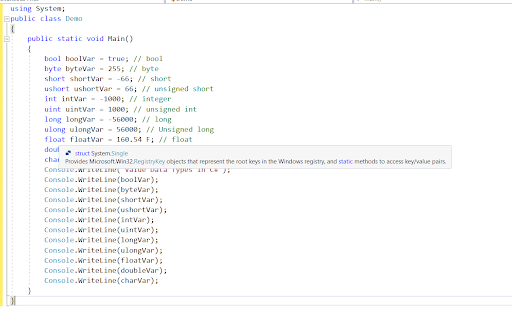 The following is the outcome of the abovementioned program: 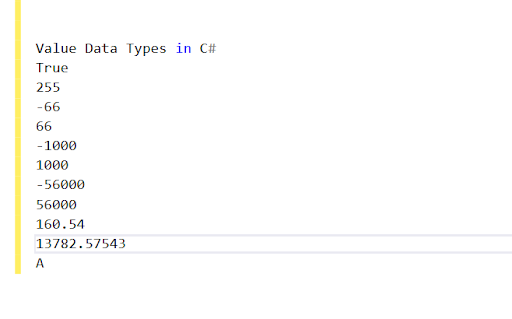 The next is the Pointer Data Type. The Pointer Data in the C# programming language saves the domain name of the other dataset. They are utilized in a hazardous context, which means that using these pointers inside the software demands the usage of an illegal operator. The C# language pointers offer similar features as the C++ or C ones. This cursor data type has the following format:

The following is a code that illustrates pointers:

The result of this code is as follows:

Characters Utilized In The Pointer

Two symbols are of great importance in the pointer data type. These are:

An * (Asterisk mark) may be used to define a pointer within the C# programming language. For instance:

Last but not least is the Reference Data Type. The Reference data types do not involve the data contained within a variable. However, they link to them (memory address). If two referral variables hold a similar memory address, changing the quantity of one variable would affect the state of the associated reference parameter. A few examples include Object, string, and other constructed-in reference classes. Moreover, the standard data types are typically customer-defined such as Interfaces, Class, and others.

The following is software that illustrates boxing or unboxing:

In C# language, the word string is a bundle of zeros or more unscripted symbols. It, is also generated from the entity type.

The following is a script that illustrates strings:

The last kind is the Array Type. Arrays are assemblages of datasets of a similar type. They are saved as a series of memory places. The starting item is found at the lowest location whereas, the final one is found at the top location.

The following is a script that displays arrays: 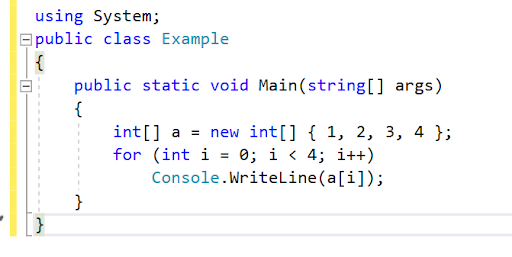 Here, we have covered the entire detail of Data Types in C#. We hope that you have noted everything down!

This section includes the details of C# Variables, and Do not worry. It is not going to be tough for you!

Variables are the labels given to the memory locations that software modify to produce different outcomes. In simple words, they are standard data storing sites. You may insert data within them and recollect the values as a component of a C# code. Types are used to govern how data within a variable can be interpreted. The C# programming is a Statically Typed programming language. As a result, all actions upon variables are conducted with the Type of variable in mind. There are standards that govern what functions are acceptable to ensure the security of the data contents you place inside a variable. Various sorts of variables exist, including integrals, Boolean, floating points, and others. 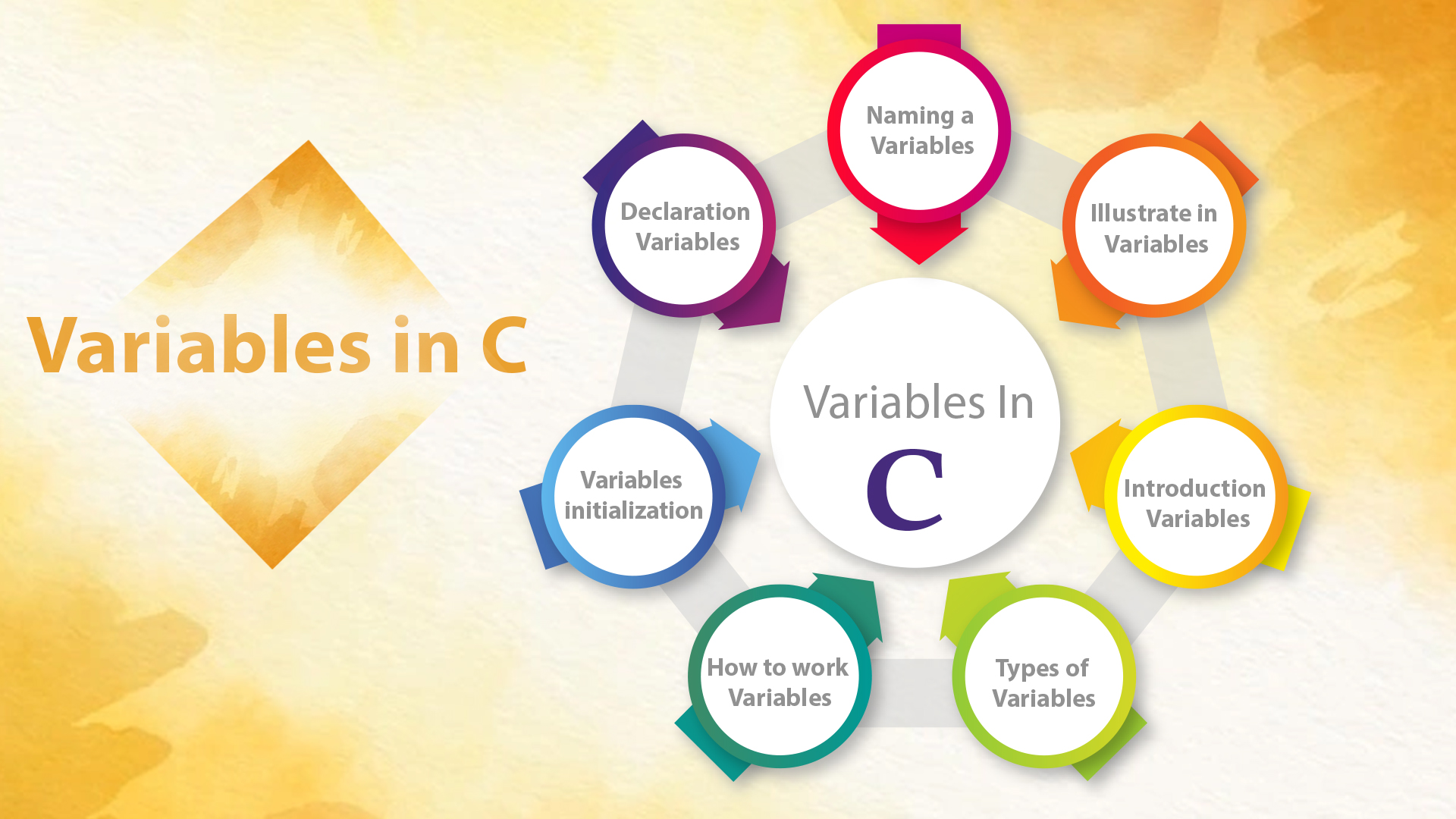 Now, let us define and initialize Variables in terms of Syntax one by one.

The below syntax may be used to specify a variable:

In the above syntax, any acceptable C# data format like int, double, bool, float, and others may be used as “DataType”. Whereas, “VariableList” can have one or several variable identities differentiated by commas.

Variables may be configured utilizing the task controller with the local variable initials to its left side while the value is added to its opposite side. It is demonstrated as follows:

Initializing variables can also be executed at the same time as declaring them. The following is the code for that:

Any acceptable C# data structure like bool, double, int, and so on can be used as “DataType” above. While the variable’s title is “VariableName” and the variable’s “value” is the number that has been allocated to it. The variable will have different variable names and terms depending on your need.

The following is a C# script that shows variable declaration and configuration: 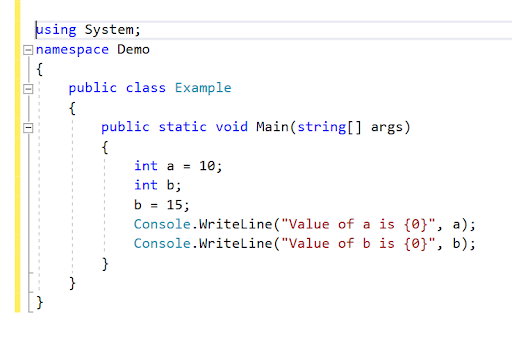 The result of this script is:

Most programmers do not understand the standards for naming the variables. But, we want our readers to be the best programmers out there. So, we added this little section that would explain a few rules for the naming of Variables. These are listed below:

The following is a sample of acceptable and incorrect variable names:

And now, we assume that you have a great understanding of the C# variables and data types.  So, let us move on to the next section: Operators. 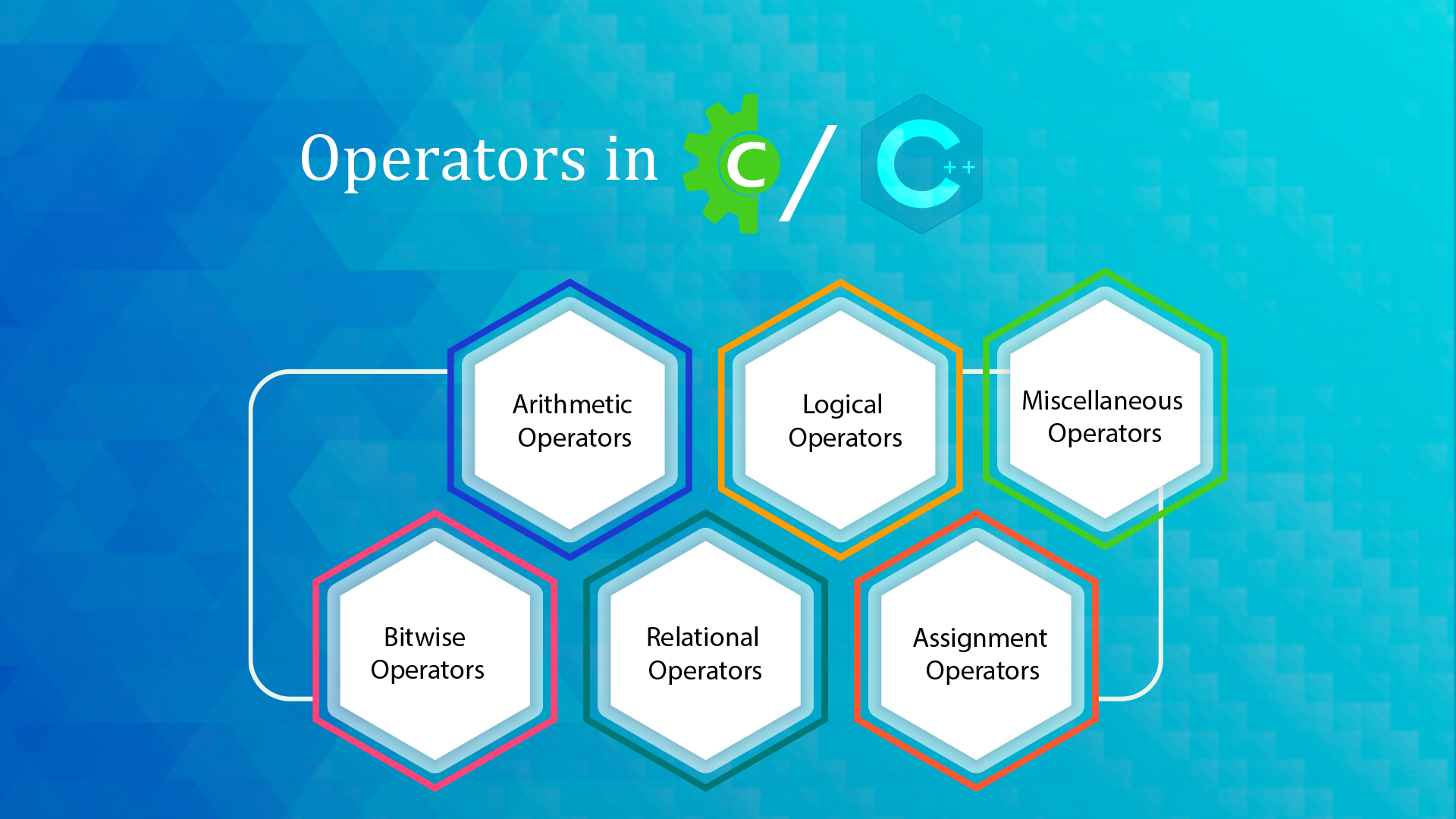 Let us have a look at these examples in detail: 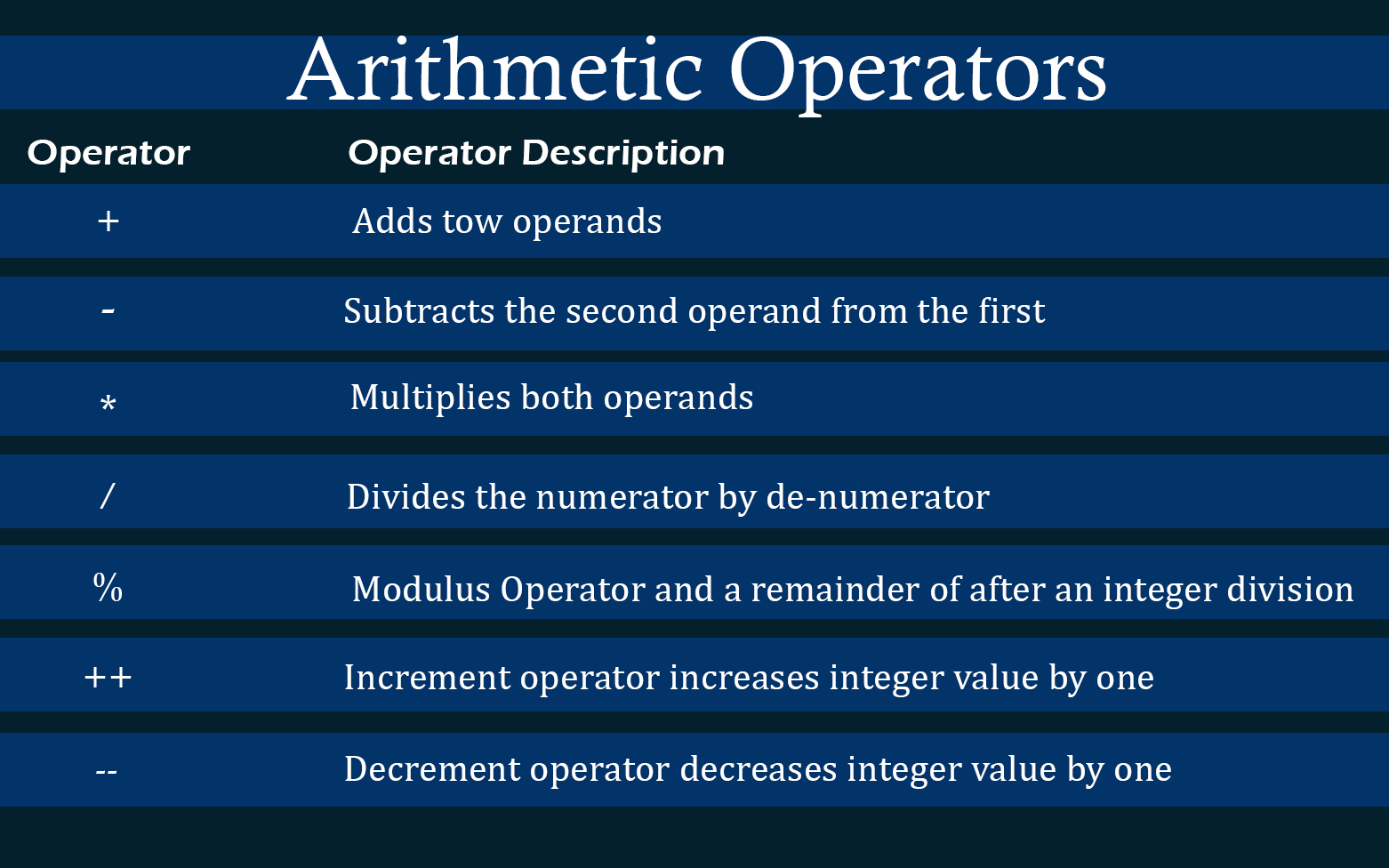 You must remember these arithmetic operators. If one fails to recognize the description of operators, he will make mistakes in the code.

Relational Operators is another example of the operators used in the C#. Relational Operators are applied for differentiation. It includes determining whether a variable is more or less as compared to some other variable. Let us have a look at the table below:

The script that explains the relational operators is next: 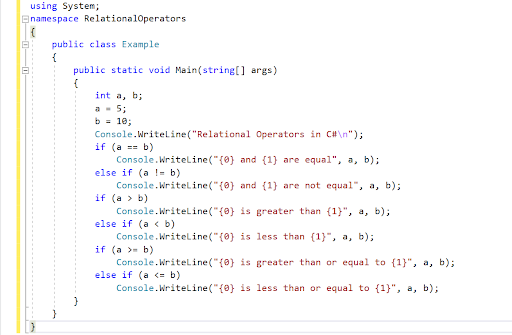 And the outcome of the above code is:

The relational operators are the most important of all the operators as they code for comparison.

These operators are used in .NET as follows:

We added the scripts to help you have a better understanding of everything. Let us have a look at the coding used in .NET: 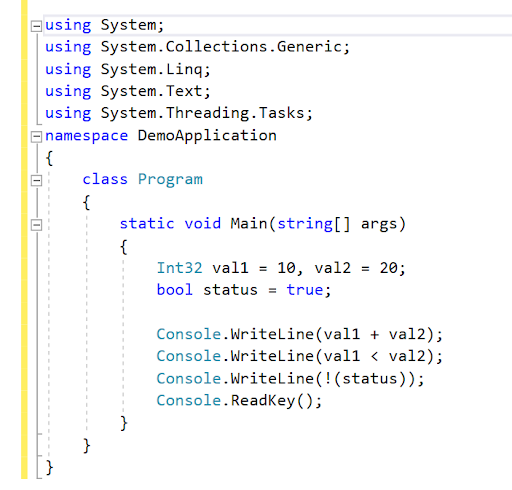 Now, you have learned three new terms in the C# programming language. All these steps are taking you closer to your dreams of programming. 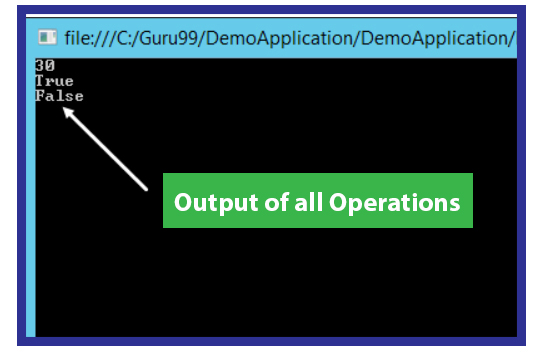 In this article, we have provided you with a detailed summary of three terms used in the C#: Data Types, Variables, and Operators. We understand that all of the terms seem challenging in the beginning. Once you start executing your C# programs, these would be a child’s play for you. Moreover, we would suggest you read this article again. It would help you clear out any confusions that you might have right now. Please keep all the rules and terms in your mind to avoid any errors. We wish you the best of luck with your first C# program execution.