How To Setup C# Environment

Hello friends, I hope you all are fine. In today’s tutorial, we will discuss How to set up the C# environment? This question deserves to get answered in detail, and that is why we wrote this article for you. In the previous tutorial, we have seen a detailed Introduction to C# Programming Language.

So, keep reading to find out everything about how to set up a C# environment.

What is C# And What are its Advantages?

C#, also known as C sharp, is an all-purpose, contemporary, object-intended coding language. Microsoft created the #C programming language as part of the .Net project. It is certified by the European Computer Manufacturers Association (ECMA) as well as the ISO. The updated iteration of the C# programming language is version number 7.2, and it is one of the main languages for Standard Language Framework. C# is identical to Java language and is simple for individuals familiar with Java, C++, or C.

As great as it sounds, the advantages of the C# programming language are exceptional. A few of them are listed below:

Everything in this entire world is made up of some fundamental components. Without those components, that particular thing would not work. The C# Environment works the same way. But, what elements are involved in the setup of the C# Environment? Let us have a detailed look at the components in this section. Before we begin, here is a reminder for you: Start Taking Notes!

The.NET System is a production, integration, and execution platform for online services and projects. Installation of the .NET Framework element is required to launch C# apps or other projects. The .NET also promotes many coding languages such as Visual C++, JavaScript, Visual Basic, and F#. Yet C# is among the most widely used programming languages within the.NET Platform. It features two fundamental elements: 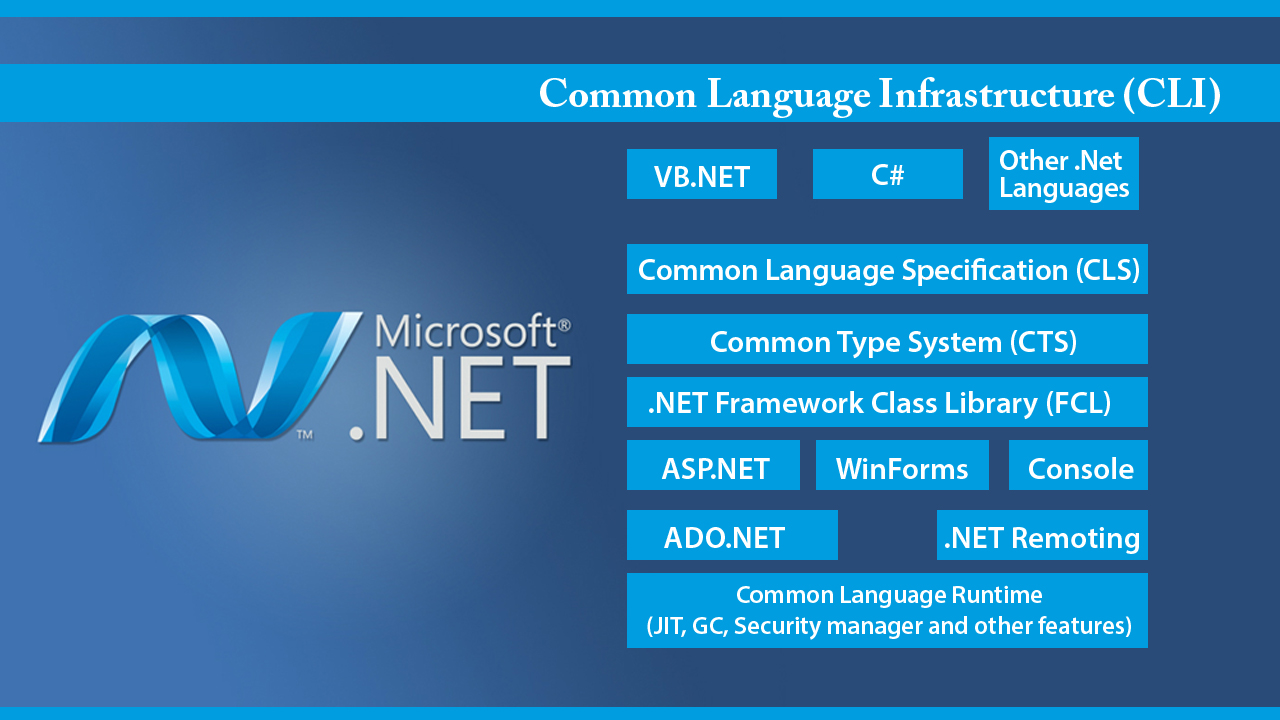 Apart from these two, the .NET Framework also has other elements listed below:

Visual Studio is a Microsoft Integrated Development Environment (IDE) platform for designing projects in many coding languages like Visual Basic, C#, and others. For business purposes, it is necessary to purchase a Microsoft permit to download and operate Visual Studio. However, Microsoft offers a complimentary VB Community Edition for educational use. It is indeed an inclusive topic, and so we will discuss it in the next section.

We agree that the terms above may seem scary. But, we promise that once you grasp the concept of the entire environment set up of C# programming language, these terms will be child’s play for you.

What Visual Studio IDE Actually Is?

Visual Studio is an Integrated Development Environment (IDE). You may write managed or indigenous script with the assistance of this IDE. It takes advantage of different software programming frameworks from Microsoft, such as Windows Store, Windows API, Microsoft Silverlight, etc. The best thing about it is that it is not a dialect-specific IDE, and both Windows and Mac offer it.

Visual Studio 97, with edition number 5.0, became the first iteration of VS launched in 1997. The newest release of VS is version number 15.0, which is also known as Visual Studio 2017. March 7, 2017, was its launching date. In the most recent release of Visual Studio, the .Net Platform variants facilitated range from 3.5 to 4.7.

Microsoft has released three different editions of Visual Studio. This section contains the information of these three editions so, please read carefully. These are:

The Community Edition, released in 2014, is a free-of-charge version. The remaining three editions charge. This release has features that are identical to the Professional one. Any independent programmer can create cost-free or premium applications such as internet games, web services, and many others.

The Professional Edition is the business version of Visual Studio. It arrived in VS 2010 as well as is available in newer versions. It features tools like System Navigator and connectivity with SQL, as well as encourages XSLT programming. Its primary goal is to empower members with versatility, efficiency, cooperation, and perks such as Pluralsight, Azure, Microsoft software, and other Microsoft services.

This version is offered for a free test period, after which the customer must make payments to keep using it.

The third and the last Enterprise Edition is an all-in-one, end-to-end tool for organizations of any complexity with high-quality and scale requirements. The prime advantage is that this edition is exceptionally expandable and produces high-quality programming.

This version comes with a 90-day complimentary trial, after which the customer must spend money to resume accessing it.

Now, you would be questioning: Why am I studying Visual Studio in-depth even though I can set up my C# environment using different tools? Well, Visual Studio has exceptional features which are hard to find in other tool platforms. Let us have a look at some of the features Visual Studio offers: 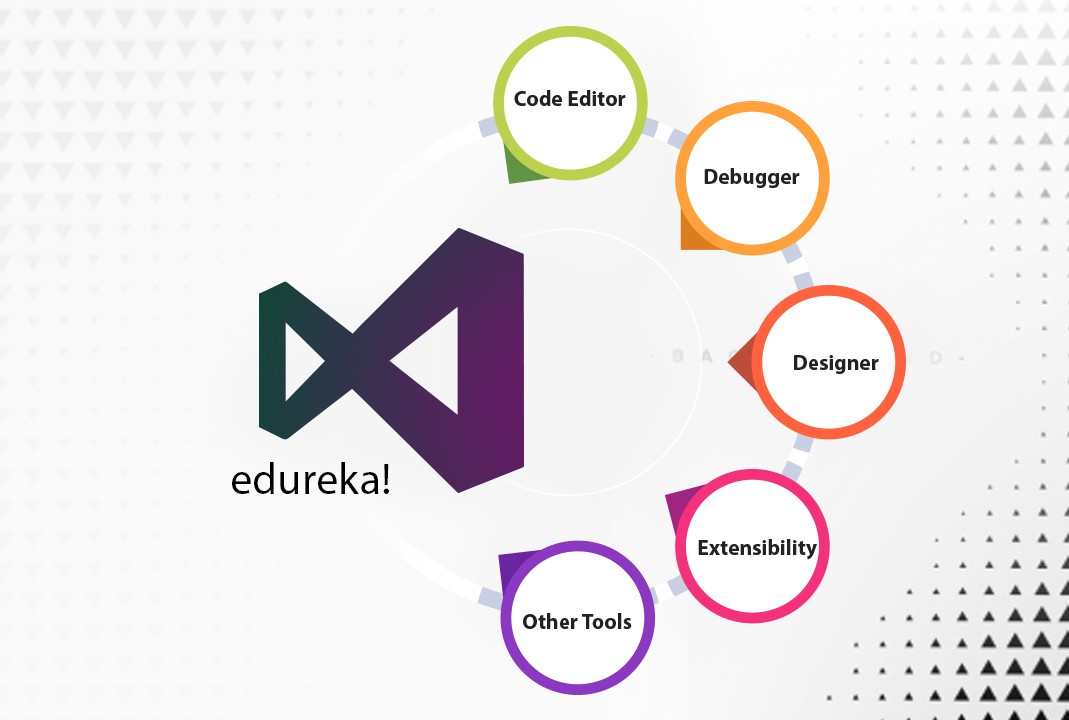 Git repositories maintained by any service can be used to organize the original code. Azure DevOps manages the script of the program conveniently.

Utilizing different features, controls, and layouts can enhance the productivity of Visual Studio.

The exceptional Visual Studio comes with several visual developers to help with app designing. These tools are listed below:

So you see, there are various features of the Visual Studio, and that is why you should use it while setting up your C# environment.


The most awaited section of the entire article is here: Steps for C# Environment Setup. Now that you have a great understanding of all the terms and tools, this section will be easier for you. Let us begin:

The first step is to install the Visual Studio Community Edition. Here is how you can install it: 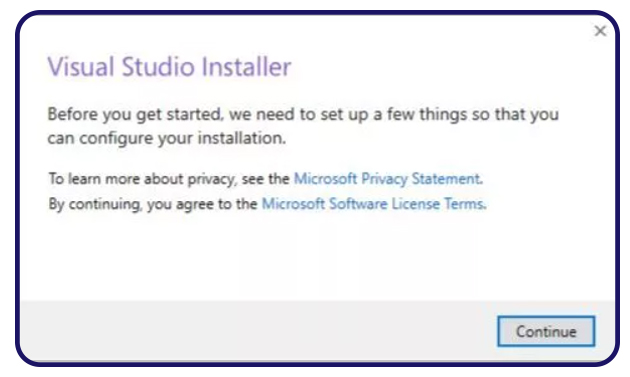 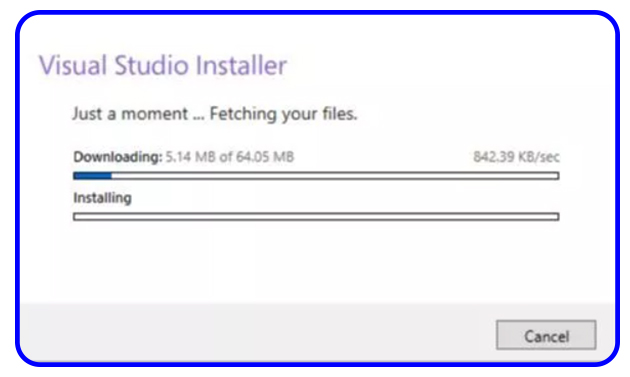 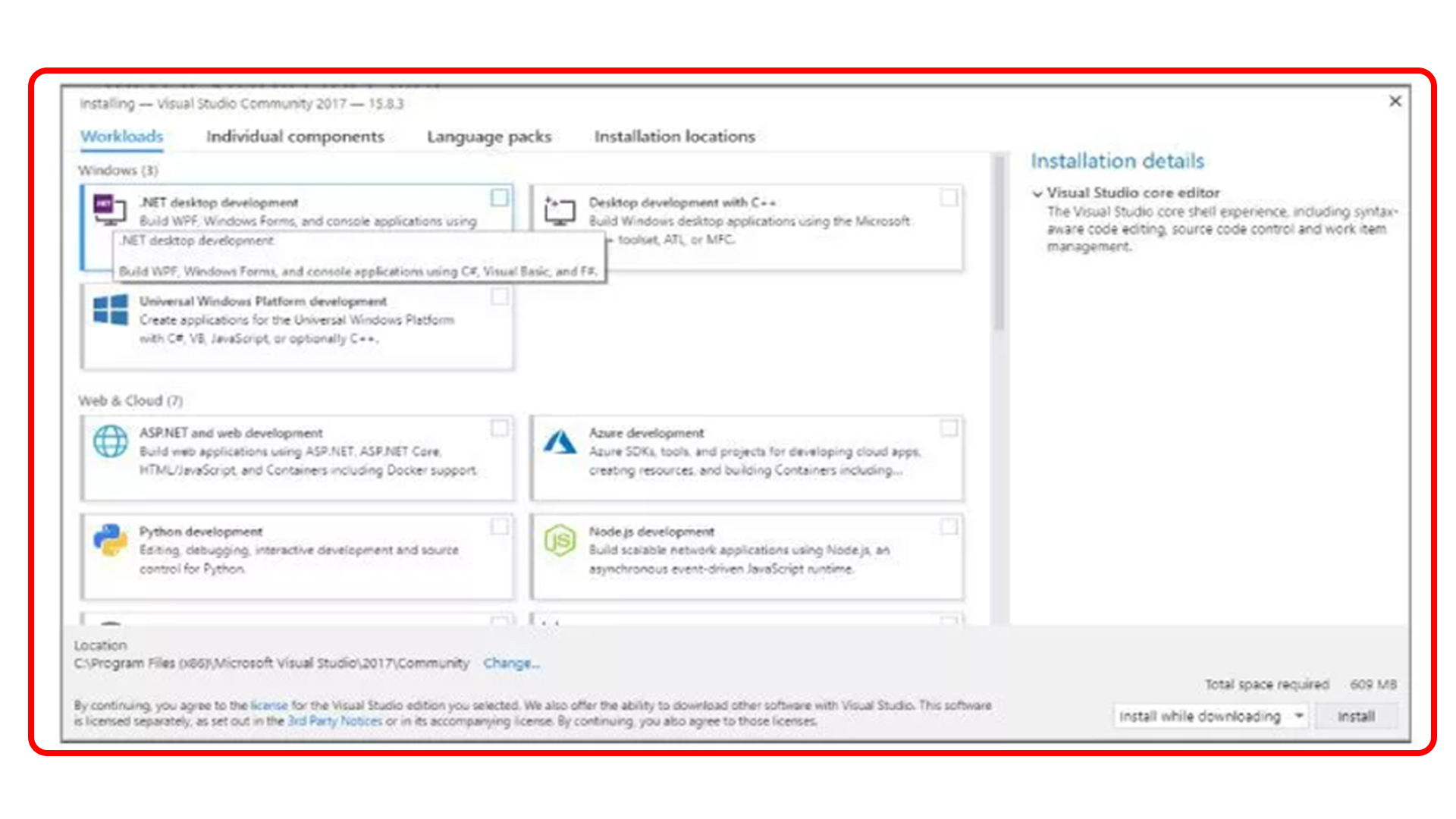 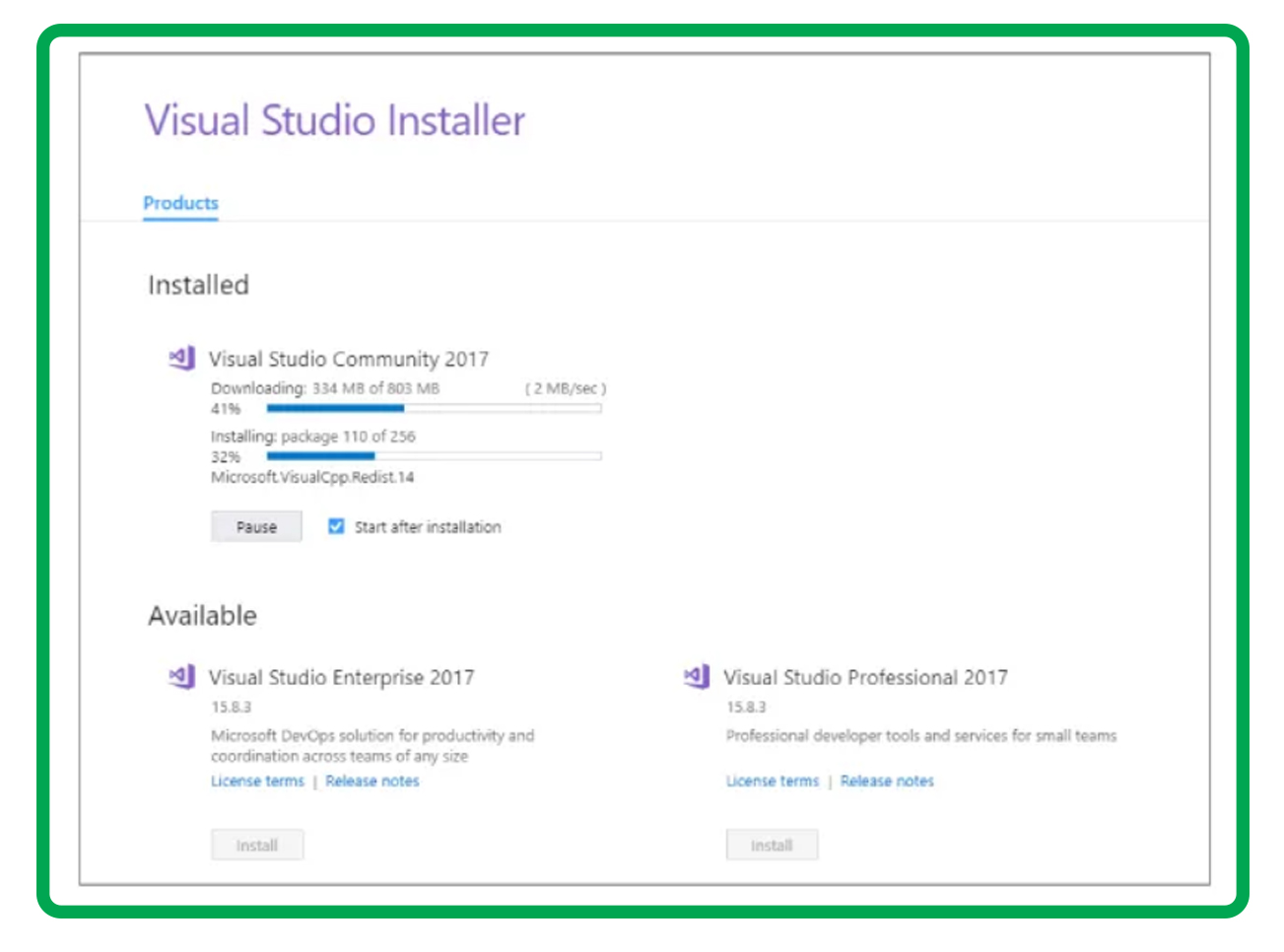 
The second step is to start operating in the visual studio. For this, you have to open the installed Visual Studio from your laptop. And let us get started with Programming: 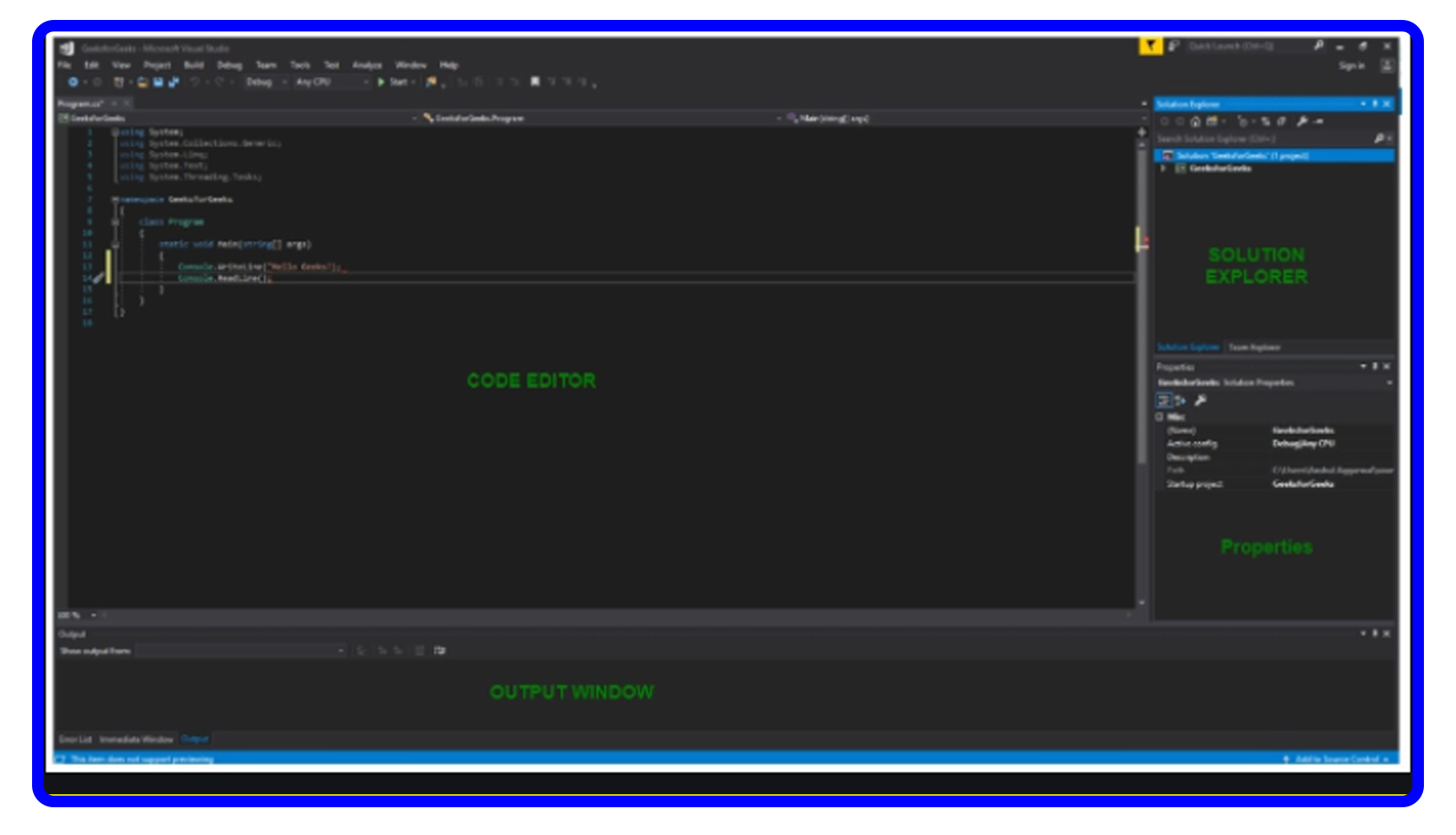 Here’s how you can do it: 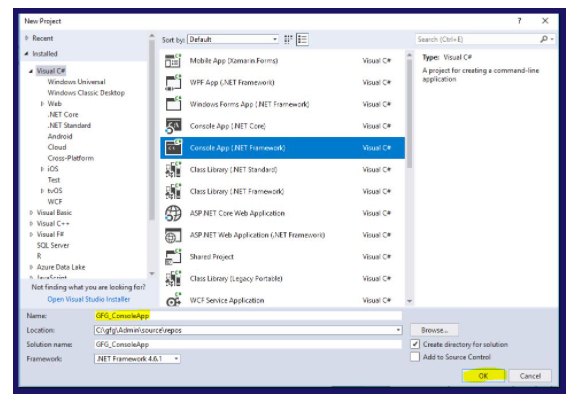 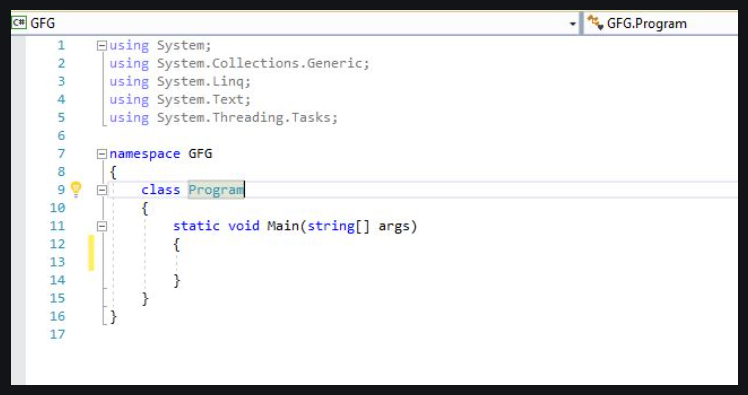 And Kudos! You are done setting up the C# environment. Wasn’t that easy? Now, you are ready to setup your C# environment. But before that, you should read the next and last section carefully.


We want you to work productively and error-free so that, you do not have to face any problem while setting up the C# environment. This is why we have added this small section of common mistakes to let you know everything.

These are listed below:

Value classes in C# cannot be empty. These should have a term, and even unreferenced elements should have a result. It is referred to as the type’s standard setting. When verifying if a parameter is unreferenced, it generates the following, typically surprising result:

In the above illustration, the standard state for the Point equals (0,0) and not empty, because it is a numeric kind. In C# programming, failing to identify it is a fairly straightforward (and widespread) blunder.

Although database searching is a common application for LINQ expressions, they may be applied to any enumerable set. For instance, rather than creating a C# List for all accounts in a collection:

You can just type:

It is a quite common mistake and we do not want our readers to go through that. Also, you must takes notes to remember all these points.

This point must be noted down! Because the CLR system includes a garbage collection tool, you do not have to manually clear any space allocated to any item. The erase operation in C++ and the free () tool in C do not even exist. But, this doesn’t imply that once you’ve used something, you could just ignore it. Many different kinds of entities encapsulate different kind of system component like a disc file, database interconnection, and others. Ignoring these elements can rapidly exhaust the overall quantity of system services, resulting in poor efficiency and, eventually, program failures.

Other mistakes can be:

So, you need to be careful while setting up C# environment.

In this article, we have provided details regarding setting up your C# environment along with discussing some common mistakes made by developers while this process. We hope that you will avoid those mistakes and will work productively. We wish best of luck to all our readers. Happy Programming!