Raspberry Pi as Internet of Things(IoT)

The Internet of Things (IoT) philosophy may be viewed as a highly dynamic and radically dispersed networked system comprised of a huge number of identifiable smart devices. These objects may communicate and interact with one another, as well as with end-users and other network entities. As the Internet of Things era begins, the usage of small, inexpensive, and flexible computer hardware that allows end-user programming becomes more prevalent. The Raspberry Pi, a fully configurable and programmable tiny computer board, is one of them discussed in this article. Although there are certain limitations, the Raspberry Pi remains a low-cost computer that has been used effectively in a wide range of IoT vision research applications despite its few shortcomings. 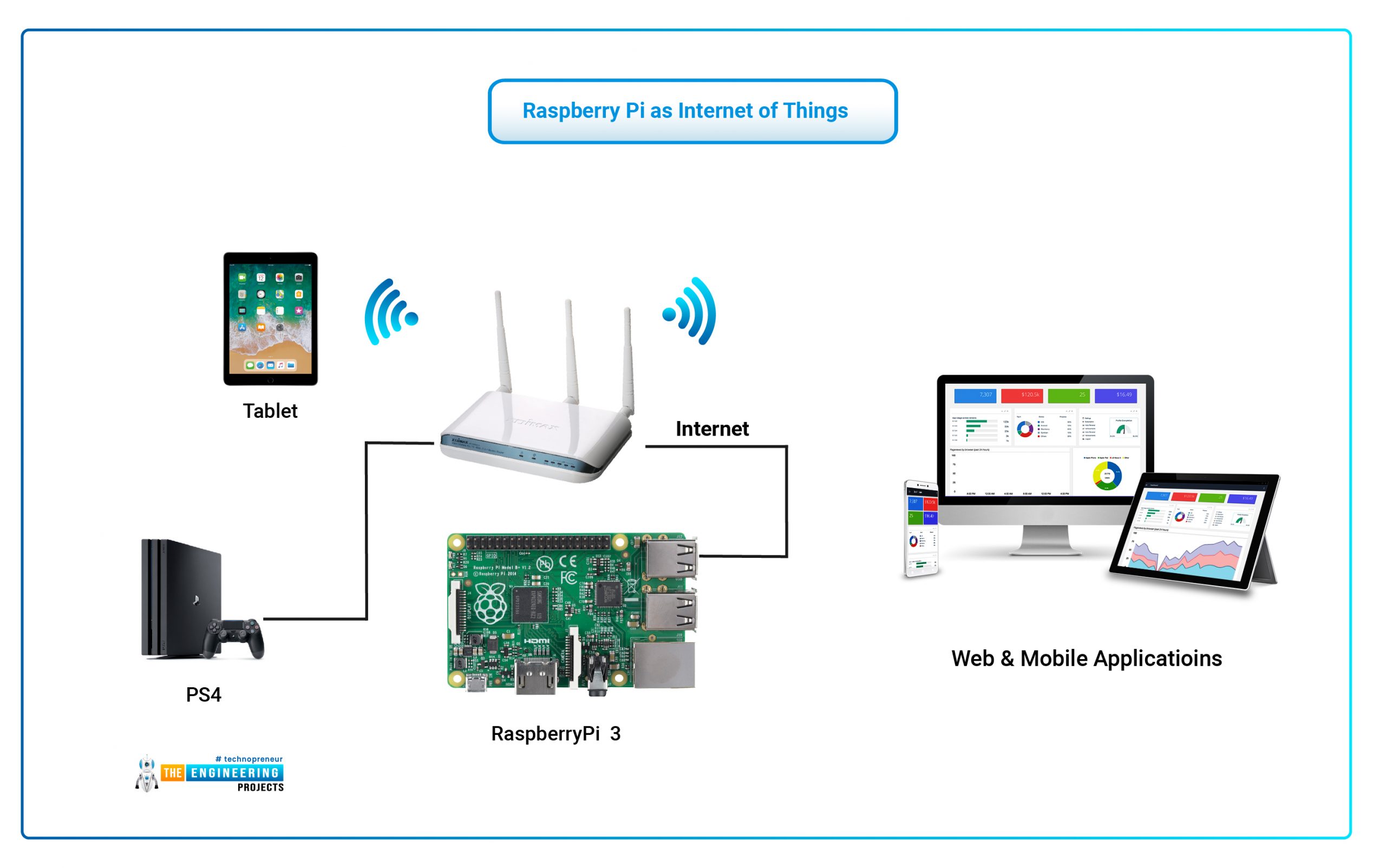 Introductory Notes The Internet of Things – IoT – may be viewed as a highly dynamic and widely dispersed networked system. For example, it is a network of linked smart objects that may communicate and interact with one another, as well as with end-users or other network entities, such as users or other entities in the network. Safety, security, comfort, convenience, and energy savings are maximised when smart devices can perceive physical phenomena and transform them into data streams, as well as when smart devices can trigger actions. These systems should: 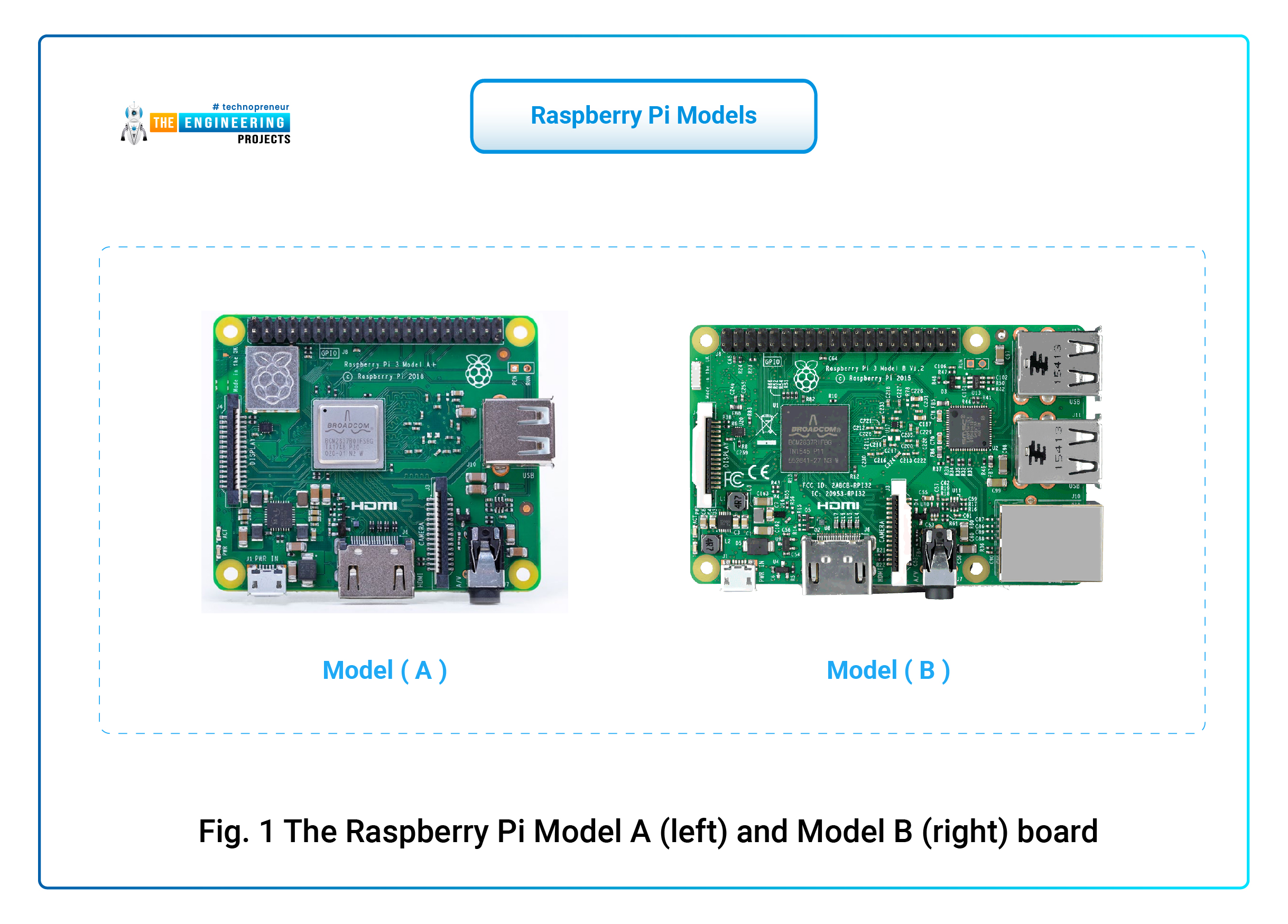 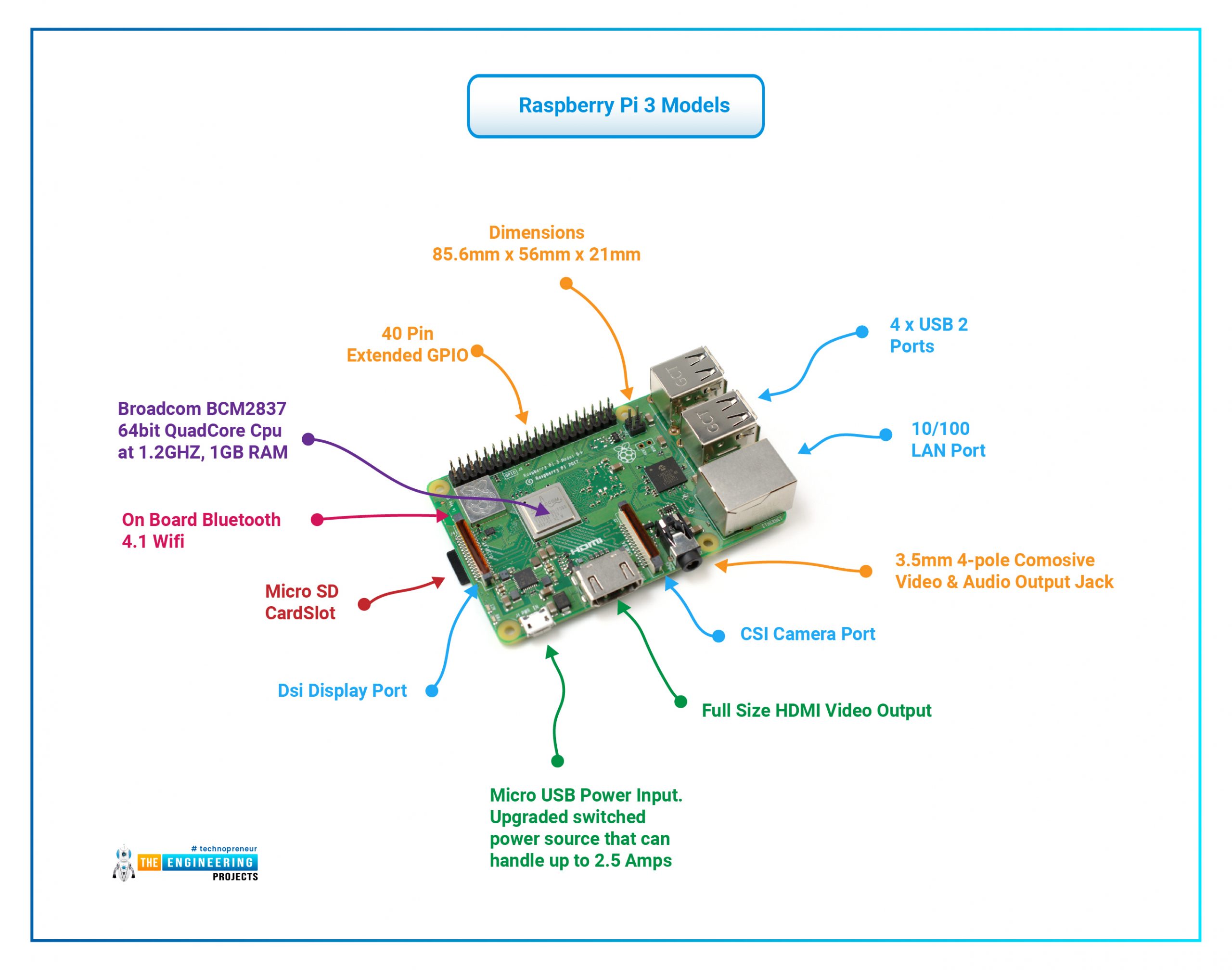 While internet access can be achieved through an Ethernet/LAN cable or a USB dongle (WiFi connectivity), a USB connector is required [5, 6]. Figure 1 shows an example of a formalised formalised formalised formal Model A (left) and Model B (right) Raspberry Pi boards Figure 2: The Raspberry Pi’s essential components The Raspberry Pi, like any other computer, is powered by an operating system. Raspbian is a fantastic Linux alternative for Raspberry Pi since it is free and open-source, keeping the platform’s price cheap and making it more hackable. There are a few non-Linux OS alternatives available as well [5]. The Raspberry Pi offers a wide range of applications, which is one of its best features. The remainder of the article will discuss what allows it, as well as the performance and limits of the Raspberry Pi. The performance of the Raspberry Pi will be compared against the following IoT prototype platforms (Fig. 3): Arduino is an open-source physical computing platform that is built on a basic microcontroller board and includes a programming environment for creating software for the board (Fig. 3 a). It can accept information from a number of sensors and operate lights, motors, and other actuators to influence its environment. The Arduino programming language and the Arduino Integrated Development Environment may be used to programme the microcontroller on the hardware board (IDE). Arduino has two operating modes: stand-alone and linked to a computer via USB cable [3]. BeagleBone Black Is a single-board computer based on low-power Texas Instruments processors and the ARM architecture. 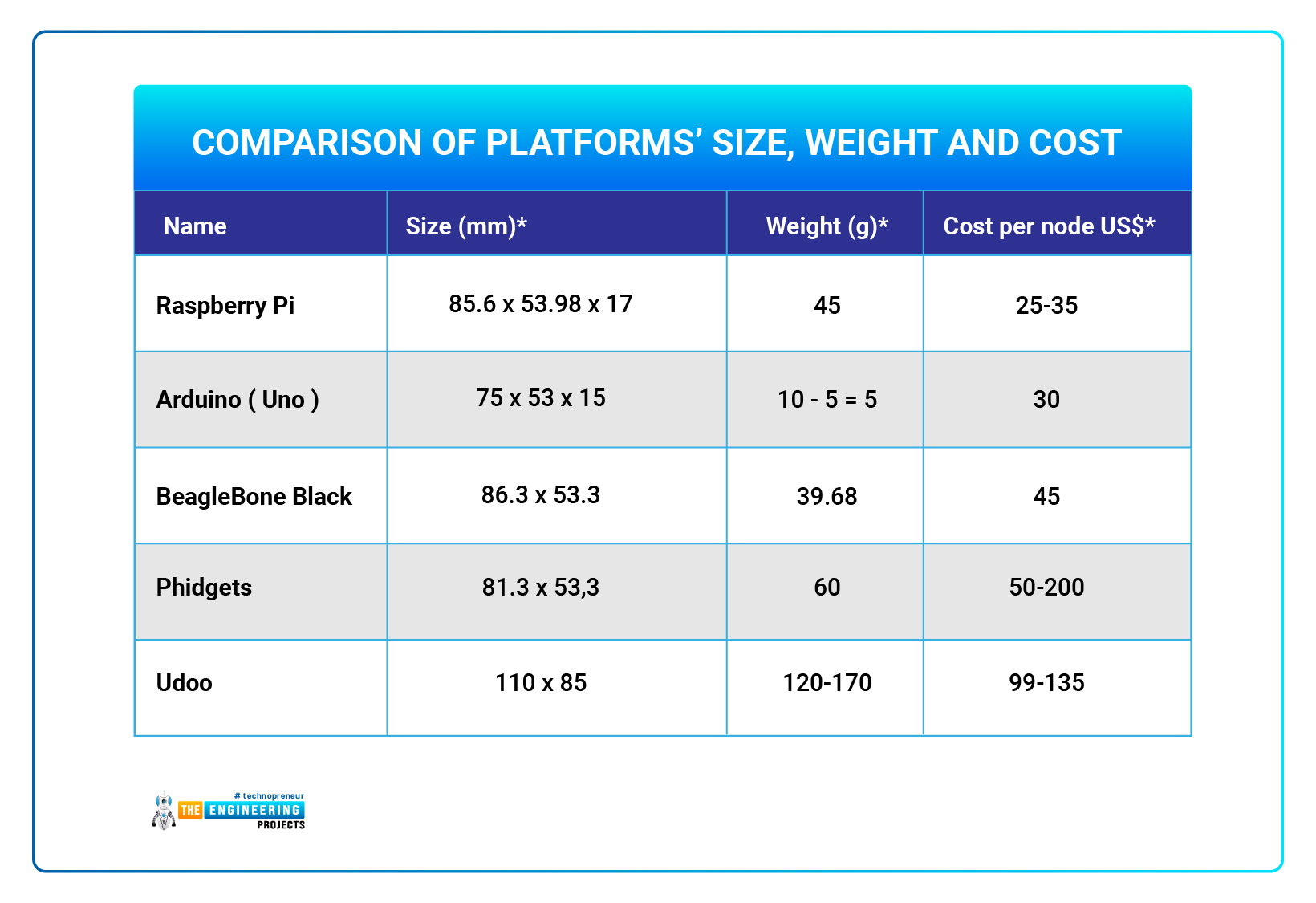 B. Strength and Memory The suggested platforms’ major objective is low power consumption in order to fulfil the multi-year application requirements. Only by combining low-power hardware components and low-duty-cycle operating approaches can ultra-low-power operation be accomplished. 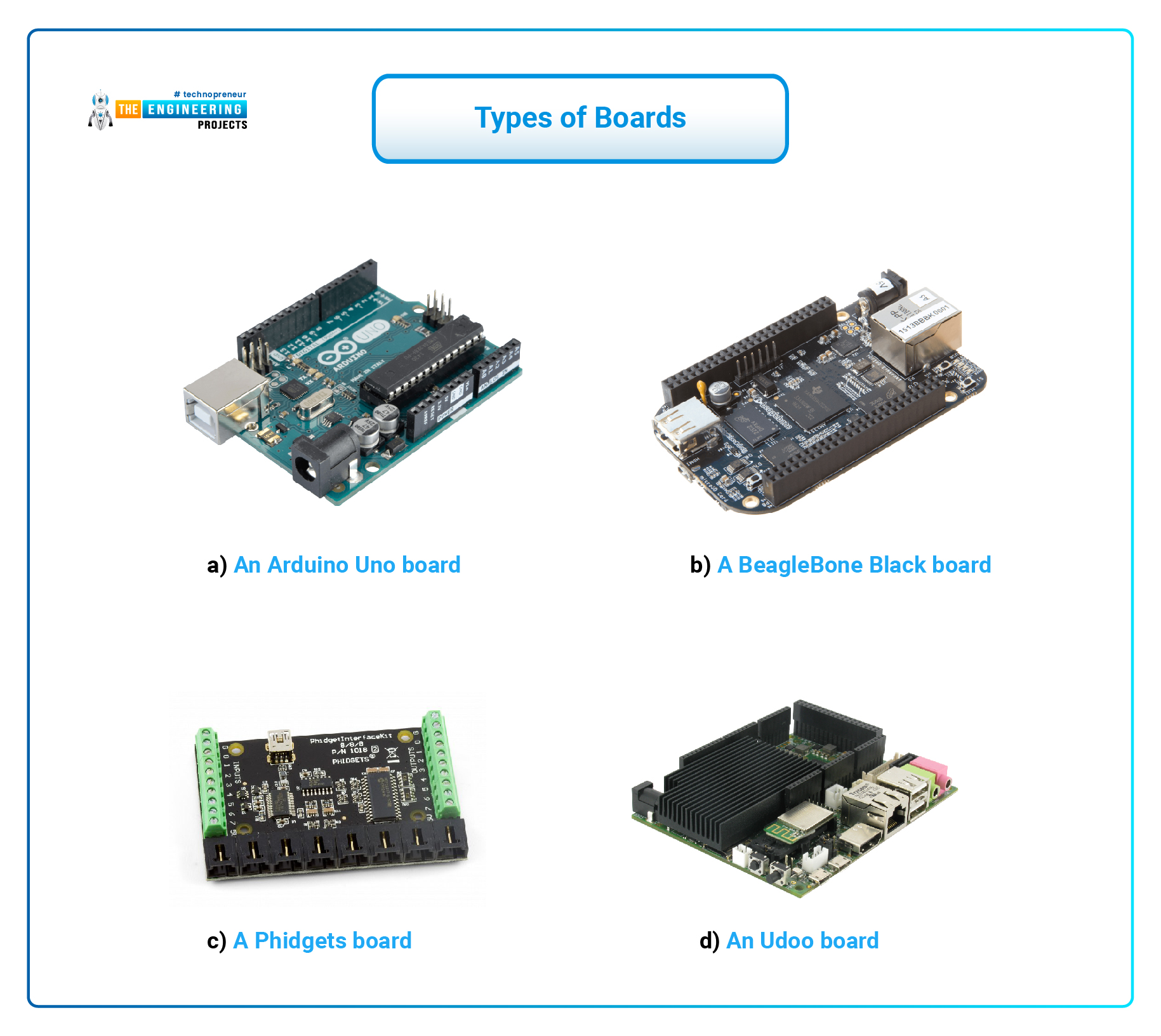 As previously indicated, the Raspberry Pi requires up to 700mA to operate. The Raspberry Pi device may be powered by a variety of power sources (provided they can deliver adequate current 700mA), such as a computer USB port or powered USB hub (depending on power output), special wall warts with USB ports, mobile phone backup battery (depending on power output), cell phone solar charger, alkaline batteries (six rechargeable AA batteries and a voltage regulator). The Raspberry Pi’s main power supply constraint is that no external device should use more than 100mA from any of its USB ports.

In terms of storage, the gadget should have enough memory to store the gathered data. In addition to storage capacity, programme memory should be sufficient to execute simple computations and send just the necessary data and routing information if the device is connected to a network. It is crucial to understand that the Raspberry Pi does not have a hard drive and that everything is saved on a Secure Digital (SD) Card. The minimum needed SD card capacity is 2 GB, however larger SD cards with capacities of 32 GB, 64 GB, or more are available but frequently prohibitively costly. This storage may be increased by employing devices that supply an extra hard drive through USB ports. These are referred to as USB Mass Storage (UMS) devices and can be traditional hard drives, solid-state drives (SSDs), or even tiny pocket-sized flash drives. Table II provides a comparative study of platform CPU, memory, and power.

C. Adaptability To be useful in a wide range of applications, the architecture must be adaptable and versatile. Furthermore, for economic considerations, it must make it simple to build precisely the correct mix of software and hardware components. As a result, these devices need an extraordinary level of hardware and software flexibility while being efficient [10]. The adaptability and universality of any gadget, on the other hand, are its strengths. One of the best things about the Raspberry Pi is its versatility; there is no one way to utilise it. It can, for example, be used for: broad purpose computing, capable of interfacing with other electronic boards and communicating with other computing devices using a range of various protocols such as Serial Peripheral Interface (SPI) and Inter-Integrated Circuit (I2C): o I2C – low-speed interface – Inter-Integrated Circuit (I2C) is a serial bus interface that can communicate with numerous devices using only two wires. It operates at relatively modest speeds. o Serial Peripheral Interface Bus (SPI) – Serial Peripheral Interaction Bus (SPI) is a synchronous full-duplex (two-way) serial connection. The Raspberry Pi Model B Rev 2 features an enhanced variety of connections in addition to the usual GPIO port [13]. P5 header has 8 pins (+3.3 V, +5 V, two ground pins, and four GPIO pins that can offer the second I2C protocol) and P6 header has two pins — their short-circuiting enables soft reset of BCM2835. Table III examines the expansion connections used by the Raspberry Pi and other platforms to connect to a broad range of external devices. 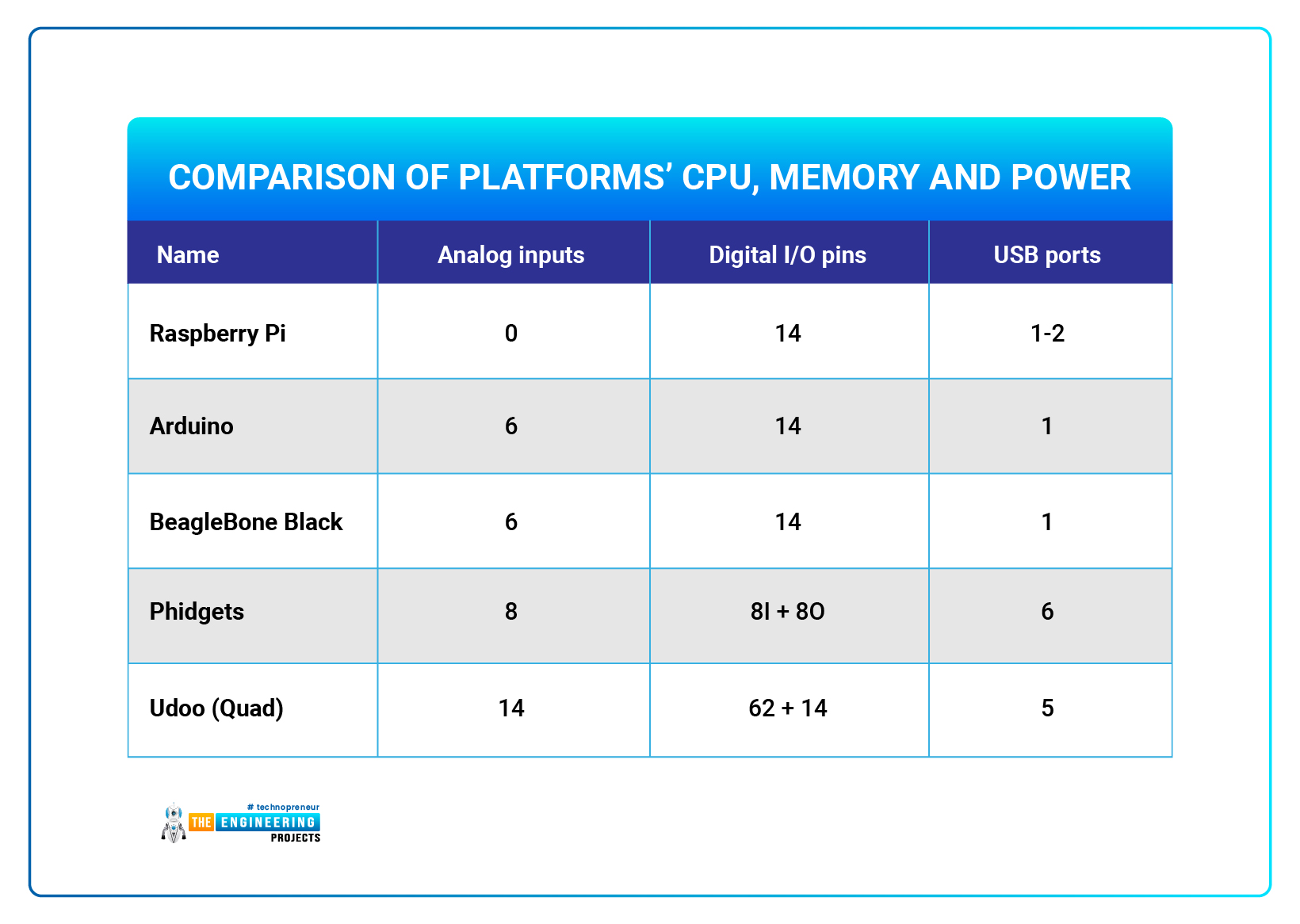 The Ethernet connector on the Raspberry Pi serves as the primary interface for communicating with other devices. It is auto-sensing, so it may be linked to a router or directly to another computer (without the use of a crossover connection) [5, 6]. Model B features a conventional RJ45 Ethernet connector, but model A lacks one but may be linked to a wired network using a USB Ethernet adapter. The USB Ethernet adapter offers two speeds: 10 Mb/s and 100 Mb/s (Table IV). When you attach a cable to the Raspberry Pi, it will immediately get the information it needs to connect to the Internet when it loads its operating system through the Dynamic Host Configuration Protocol (DHCP). This gives the Raspberry Pi an Internet Protocol (IP) address and informs it which gateway to use to connect to the Internet (typically the IP address of router or modem). The Raspberry Pi’s drawback is the absence of an inbuilt WiFi module, however, this functionality may be added via USB dongles. As a result, the Raspberry Pi may be used to create ad-hoc networks or to connect to a variety of wireless networks, including those that utilise the newest 802.11n high-speed standard [11]. Raspberry Pi can serve static webpages, but it can also produce dynamic content by utilising databases and web apps. It can also offer access to its GPIO ports via web technologies. In addition, Raspberry Pi may be used as a Sensor Web node by connecting it to a network and making it accessible to other computers.

Emerging user programming trends enable non-professional end-users to customise products to meet their unique demands. There are hundreds of products available now that allow end-user programming. Using affordable hardware and open-source software, it is feasible to programmatically manage numerous devices in such a manner that the own solution satisfies user demands. Furthermore, giving end-users with skills and the ability to mould goods to their requirements benefits both users and product creators. One of the prototype systems that allows end-user programming will be explored in this work. The Raspberry Pi computer board will be highlighted, including a comparison of its performance and limitations with current popular prototyping platforms [2]. The primary objective of this research is to identify and explain the benefits and drawbacks of the Raspberry Pi, as well as the capabilities of its use in the construction of the future generation of IoT. The remainder of this paper is arranged as follows. Section 2 contains an overview of the Raspberry Pi, its main components, and a detailed comparison with other existing IoT systems. The final section includes closing thoughts that summarise
Raspberry Pi’s merits and drawbacks as IoT hardware.

II. COMPARISON OF THE RASPBERRY PI WITH OTHER IoT

Smart items are key to the Internet of Things vision. These things, which are equipped with information and communication technology, can preserve their context, are networked together, can access Internet services, and communicate with one another and with humans [3]. Raspberry Pi is a tiny, powerful, inexpensive, hackable, and educational computer board that was released in 2012. (Fig. 1). It functions similarly to a normal PC, needing a keyboard for command entry, a display unit, and a power source. This credit card-sized computer with numerous capabilities and a price range of $25-35$ is an ideal platform for interacting with a variety of devices. The overwhelming bulk of the system’s components, including its central and graphics processing units, audio and communications gear, and a 256 MB (Model A) – 512 MB (Model B) memory chip, are integrated into a single component. The Raspberry Pi board seen in Figures 1 and 2 comprises both necessary (CPU, the graphics chip, programme memory – RAM) and optional components (various interfaces and connectors for peripherals). The SD Flash memory acts as a hard drive for the Raspberry Pi CPU. The tiny Cortex-A8 core powers the device (Fig. 3 b). It is a tiny computer the size of a credit card that can run an operating system such as Linux/Android 4.0. The primary distinction between it and Arduino is that it can run a tiny operating system, thereby transforming it into a minicomputer capable of running applications on various operating systems. BeagleBone is intended to operate at a much higher level and has far greater computing capability than Arduino.

Phidgets are a collection of “plug and play” building pieces for bridging the physical and virtual worlds using low-cost USB sensing and control from a PC. Phidgets contain USB-based hardware boards for input (temperature, movement, light intensity, RFID tags, switches, and so on) and output actuators (servo motors, LED indicators, LCD text displays, and so on) (Fig. 3 d). Because of its design and API, programmers can discover, observe, and control all Phidgets linked to a single computer. All of the needed software components are packaged as an ActiveX COM Component. Each Phidget component necessitates the usage of a corresponding visual component, which provides a visual on-screen interface for interactive end-user control. The system includes a broad API library and may be used with a wide range of applications, including other toolkits in some situations. Using Phidgets, programmers may quickly create physical interfaces without requiring an extensive understanding of electrical design difficulties.

Udoo is a small PC with an integrated Arduino-compatible board that can run both Android and Linux. It is an extremely capable prototype board for software development and design. Udoo incorporates a microcomputer with the most popular communication interfaces (Ethernet, WiFi, USB, HDMI, SATA, digital and analogue input/output) as well as a microcontroller with a standard pinout for rapid prototyping applications. As a result, Udoo is open hardware, low-cost platform outfitted with an ARM i.MX6 Freescale CPU and an Arduino Due compatible portion based on the ATMEL SAM3X ARM processor. The creators of Udoo say that the board will have the processing power of four Raspberry Pis. Udoo’s retail lineup consists of three versions, all of which share the majority of features and differ mainly in connection and the i.MX6 CPU utilised [9]: Udoo Quad, Udoo Dual, and Udoo Dual Basic.